Weather, schmezzer — the extreme temperatures did not deter the eager attendees, exhibitors and performers from attending the biggest event of the year.

Nearly 600 people gathered for a Lunar New Year celebration on Sunday, despite nearly 40 mile an hour winds coupled with a temperature of 5 and dropping, and a wind chip that made it colder than -30.

The audience was primarily made of up families Chinese families with their children and Euro-American with their Chinese children. There were also nearly 200 Chinese elders some coming with their families but the vast majority arriving in vans and mini-buses from the various Asian adult daycare program throughout the Twin Cities. All were immersed enjoying the festivities of traditional Chinese culture which even an area where the traditional Tea ceremony was performed.

Many booths with fun activities abound for children including traditional craft making and games including Chinese hackey sackey, calligraphy, New Year’s horse decorating, Chinese lantern making, zodiac activity, paper cutting, lucky knot making as well as some food making activities such as dumplings and sweet rice balls. Many children dashed here and there with their tickets trying to decide whether to make a craft, eat some food or play a game.

There was also a wall upon which there were dozens of riddles and questions, this by far was the biggest hit for the elders. They gathered to read the riddles some in English and others in Chinese. Elders crowded the wall eagerly trying to figure out the answers and consulting for correct responses between themselves. 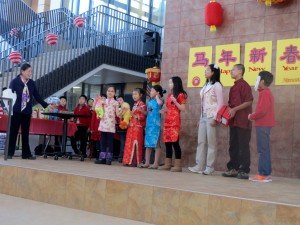 According to one of the teachers staffing an activity table, In China New Year’s is celebrate for 15 days and one of the most important aspects of this celebration is the family reunion. Sibling far away or university students usually will return home to be with their families during this time. Also red envelopes with money are given to the children and elders of friends and close relatives.

Ting Ting, a young entrepreneur also noted that while Moon Cakes are typical for the Fall Festival, this festival’s most honored includes: Chinese dumplings as y the resemble the money of ancient times and will carry fortune into the new year. Furthermore, the dumplings with veggies and meat plus dates (mean sweetness of the new year), peanuts (mean good fortune of new year), sticky rice (mean the improvement in the new year). The event was organized by Minnesota International Chinese School (www.mnChinese.org).

Photo: Students of the Minnesota International Chinese School perform at the Lunar New Year celebration on Sunday in Chanhassen. (Photo by Carlos Gallego)