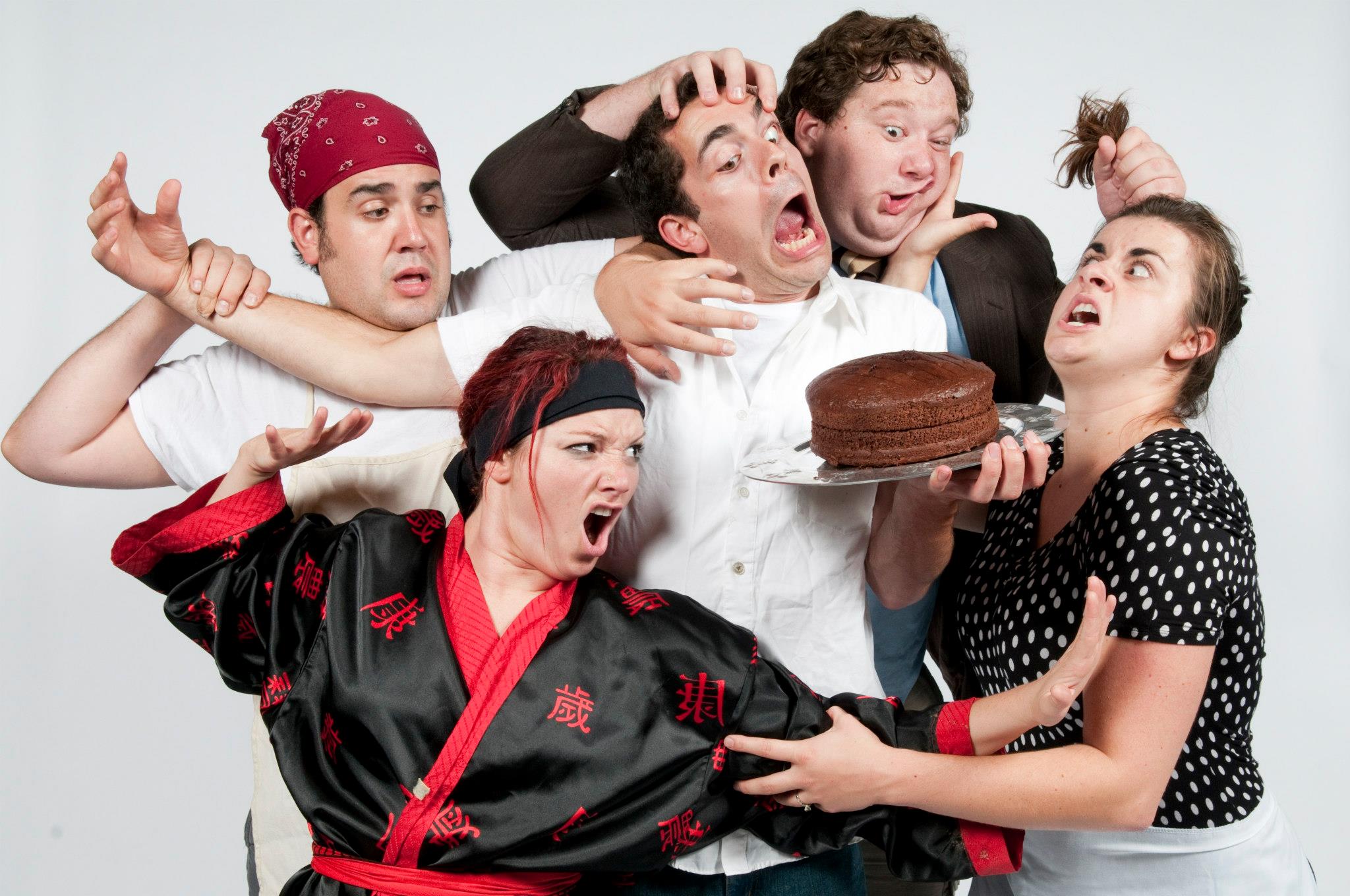 The Irrigate initiative deploys foundation funds to bring life and art to the Central Corridor. They certainly got what they paid for with Happy Cafe, Tyler Olsen’s frenetic farce about a dying restaurant that can only be saved by winning an international cake award.

The quality of the cake isn’t the problem: the problems are that the Happy Cafe is located on an isolated island, is staffed by a completely loony crew, and is subject to predation by ninjas and pirates and little old ladies. It’s as though the show has been specially selected to make University Avenue business owners feel that their construction-related yokes are light by comparison.

Happy Cafe was originally staged at the Jon Hassler Theater in Plainview, where it was warmly received. The set and 60% of the original cast have been transplanted to an available space at University and Victoria (I should let you know that Happy Cafe scenic painter Emily Hanson is the sister of my girlfriend Dana, and both are longtime friends of Tyler Olsen and his family); those who have seen previous shows in the Corridor-centric Happy franchise will be familiar with Olsen’s earthy slapstick and standby performers including Garrett Vollmer, who here plays cafe owner Claudius Happy.

The first act of Happy Cafe is a relatively slow and sometimes painful build, as we meet Mr. Happy and his hapless staff (Alisa Mattson, Mark Rehani, Brant Miller, Laura Baller Mahler) and are brought up to speed on the strangely complicated circumstances of their imprisonment on a coastal island now inhabited only by themselves and a few elderly stragglers.

Things start to pick up at the end of the act, when two of those stragglers decide to forcibly take hold of the Happy family cake recipe, no matter how much blood has to be shed. The second act has the cafe staff trying to maintain a semblance of normalcy for the judges, which is no mean feat given that “semblance of normalcy” at the Happy Cafe includes a custodian who talks to the furniture; a mute and depressed cook; a waitress whose relationship with a female martial arts expert is unhealthy in ways that just begin with the fact that the waitress probably isn’t actually a lesbian; and an elaborate theatrical routine performed whenever a visitor orders a slice of cake. I forget exactly where the ninja fits into all of this.

Some will love this show a lot, some will love it slightly less than a lot, and some will love it a lot less than a lot, but given how exhaustively (not to say exhaustingly) Olsen and his talented cast throw themselves at this material, it might be mathematically impossible for anyone who might conceivably attend this show not to find something to laugh at. University Avenue has been well-Irrigated and is blooming with life, but be careful when you smell the flowers—you might get squirted with water. Or blood.