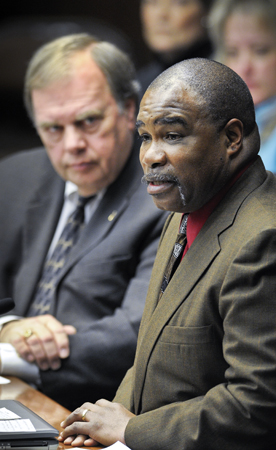 How does one define poverty? Many technical formulas include factors ranging from income level to measuring the regularity of access to food.

Xavier Bell believes poverty is measured by more than just a lack of basic tangible needs.

“(Living in poverty) also includes a lack of meaning and a lack of relationships,” said Bell, a program manager for Community Action Duluth, a nonprofit agency with an admittedly lofty goal of engaging the community to help find solutions that will end poverty. “We realize social isolation is a problem for many low-income people,” he said, “and it is one barrier that keeps people in poverty.”

Community Action Duluth is one of several organizations across the state that has made an effort to dissolve that barrier with implementation of Circles of Support, a volunteer-based program that focuses on helping low-income people develop social assets as tools to achieve economic independence. Other communities that use program include Marshall, Grand Rapids and Little Falls.

Now in its sixth year, the Duluth chapter of Circles of Support has utilized volunteers to serve as “allies” for individuals and families looking for a hand up out of a life of struggling to meet their basic needs. Allies meet with participants at least once a month for 1-2 years to help them develop social assets across class and, oftentimes, racial barriers, Bell said. The majority of the program’s participants are single mothers trying to hold down a job and/or further their education. Allies inside the participant’s “circle” often serve as mentors and may help them with a job application, proofread an essay for school or help out with minor household tasks. The larger goal, proponents say, is for participants to develop a social network that they might not otherwise have because of their current station in life.

“I think what we are seeing with Circles is an example of how we can bridge the gap between those barriers that exist between people who have those social assets and those who don’t,” Bell said. “The volunteer aspect is critical to our success.”

The effectiveness of the Circles of Support program, as it has been implemented in communities across the state, has not gone unnoticed.

Rep. Morrie Lanning (R-Moorhead) witnessed the success of similar programs in his hometown and believes Circles of Support is one of the better community-based models out there.

He sponsors HF77, which would appropriate grants for expansion of the Circles of Support program to other community action organizations throughout the state. The House omnibus health and human services finance bill contains $400,000 for the program in the 2012-2013 biennium.

Also included in the bill is $200,0000 for Northern Connections, another Minnesota-based social asset development program that the Ladder Out of Poverty Task Force concluded is a “best-practice model.”

The bill was borne out of recommendations from the Ladder Out of Poverty Task Force as it toured the state last summer in an effort to find models for success in helping low-income individuals and families move towards economic independence.

Lanning said the programs highlighted in HF77 exemplify the idea that a “hand up and not a handout” is the best way to work toward eliminating poverty, a bipartisan goal developed by the Legislature in 2006.

“There are times when people do need direct financial assistance support if they are not able to take care of their basic needs,” Lanning acknowledged, “but that’s not the way you eliminate poverty. You do it by helping them improve their education, their training, their social assets and financial assets.”

Rep. Patti Fritz (DFL-Faribault), a task force member who also sponsors HF77, said she was impressed by the spirit of bipartisanship the group displayed in its work throughout the summer as it toured communities across the state.

“I looked around at the other legislators working on this task force and I just thought ‘Good, they think like I do,'” Fritz said. “I believe the ideas we developed have been well thought out and are ideas that we can work on now and in the future.”

In one of its stops, the task force visited Ruth’s House of Hope, a transitional home for women in Faribault. Fritz said such visits were vital to the work of the task force as it developed legislative initiatives to tackle issues related to poverty.

“(The task force) not only heard from those who were helping to run these community resources, but we heard from the clients living in the house at the time,” Fritz said. “That’s an important perspective to have when we are working on these issues.”

Allowing people who are working to get themselves out of poverty to come to the table and be a part of the solution was probably the most important aspect of the task force, said Amy Brenengen, director for the Office on the Economic Status of Women.

“It was very eye opening to hear from the participants themselves just how programs, like Circles of Support, have aided them,” said Brenengen. “Listening to their stories was probably our number one priority.”

The possibility of funding the expansion of programs like Circles of Support to other communities across Minnesota leaves Bell with a sense of optimism in the state’s effort to end poverty by 2020, an admittedly lofty goal, but one he said becomes more attainable as more people get involved.

“(Circles of Support) is really about engaging volunteers in this issue of poverty,” he said, “and allowing them to see how it impacts not just the people who are in poverty, but the community as a whole.”

For more on Circles of Support go to: http://www.communityactionduluth.org/circles.html.

For more information on the Ladder Out of Poverty Task Force and its goals go to: http://www.commissions.leg.state.mn.us/ladder/ladder.html.