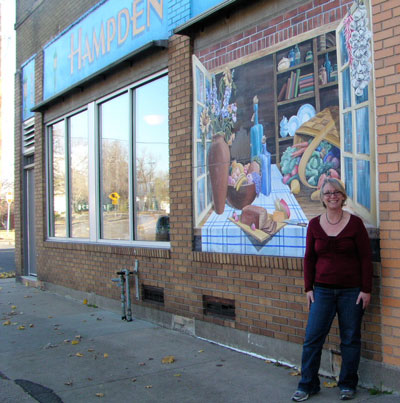 Three years go, Hampden Park Co-op opened its expanded first-floor space in a whirlwind. The Parkview Café had closed, the Odd Fellows moved out of the building they had owned for more than a century, and the co-op staff and board faced the big decision as to whether or not to become a property owner.

They took the plunge. A big indoor wall came down, the store expanded and a year later the transformation looked complete.

But that’s only the part a passerby can see. The building, located at 928 Raymond Ave., requires some behind-the-scenes work to earn its keep as a commercial property, and with a new director in place and a plan in hand, the co-op staff and board have begun thinking in years and even decades.

Last summer, the board adopted a master plan that sets investment priorities, such as repairing walls and windows, making the second floor more accessible and improving energy efficiency.

The plan considers the rapidly shifting neighborhood around the co-op. Construction for traffic calming on Raymond Avenue is expected to pose a challenge in 2013, and everyone is keeping an eye on Central Corridor development, which has cost the store sales as streets are closed but could offer new marketing opportunities once the line is open.

The board also welcomed a new general manager this year.

Kari Neathery brings to the co-op her leadership experience at Powderhorn Park Neighborhood Association and the West Broadway Area Coalition, along with master’s degrees in hospital administration and urban planning.

Neathery lives in the Hamline Midway neighborhood and has two school-age daughters.

Despite the tough economy and the growing competition from chain stores, Neathery is optimistic about Hampden Park Co-op’s viability in its current location.

“The opportunity is great now for co-op groceries,” Neathery said, “because of the interest in local foods, neighborhood shopping, people using their bikes. I think people look to co-ops for that leadership.”

And while many co-op groceries from the 1970s have closed or adopted more traditional business models, Neathery said, HPC remains committed to using volunteers who earn a monthly discount in exchange for work.

What is now Hampden Park Co-op was founded in 1972 as St. Anthony Park Foods, a nonprofit  grocery near the University of Minnesota St. Paul campus, riding a national wave of co-op grocery formations serving a growing market for natural foods. In 1979, SAP Foods acquired the Green Grass Grocery, in the co-op’s current location, and renamed it SAP Too.

Green Grass rented space from the Odd Fellows fraternal organization, which had owned the building since its construction in 1903.

In the early 1990s, corporate reorganization established Hampden Park Co-op as a cooperative rather than a nonprofit. This means its primary objective is to provide services to members, and it distributes an annual “patronage refund” if income has exceeded expenses. It is governed by a member-elected board. Each member (individual or household) purchases a share for $30 in order to join the co-op.

Neathery said the co-op now aims for $7,000 per day in sales. Membership numbers have been “pretty stable” in recent years, she said.

Architect Paul Ormseth, a co-op member who grew up in the neighborhood and has worked on some nearby residential remodeling projects, took the lead in drafting the co-op’s master plan.

Ormseth hopes it will help the membership invest wisely and prioritize “the critical part of leasing out space” so as to keep the rent coming in, he said.

After a series of meetings with the board and the general membership, Ormseth produced a two-phase proposal to enhance the quality of the existing space and then consider more ambitious remodeling and expansion—although expansion is limited by the size of the existing lot, and the price of the neighboring parcel has so far been too high for co-op leadership to consider.

The co-op is looking for tenants for upstairs office or studio space, as well as for first-floor space on Hampden Avenue, which was briefly occupied earlier this year by a business selling vitamins.

The Oak Floor Dance Association has been renting  space for second-floor space for many years, which accounts for the thumping sometimes heard in the store below.

Neathery noted that while Central Corridor construction has at times drained dollars from the store by limiting traffic along Raymond, development nearby is generally a good thing as long as it produces more customers.

The development presents some marketing opportunities, according to Ormseth. “The co-op wants to hold onto the character of the store and the community feeling,” he said. “At the same time, we want to improve the experience of new shoppers.”

“Our staff has been here for a long time,” she said. “There’s a really high level of expertise.”

Anne Holzman is a freelance writer who lives in St. Anthony Park and is a member of Hampden Park Co-op.