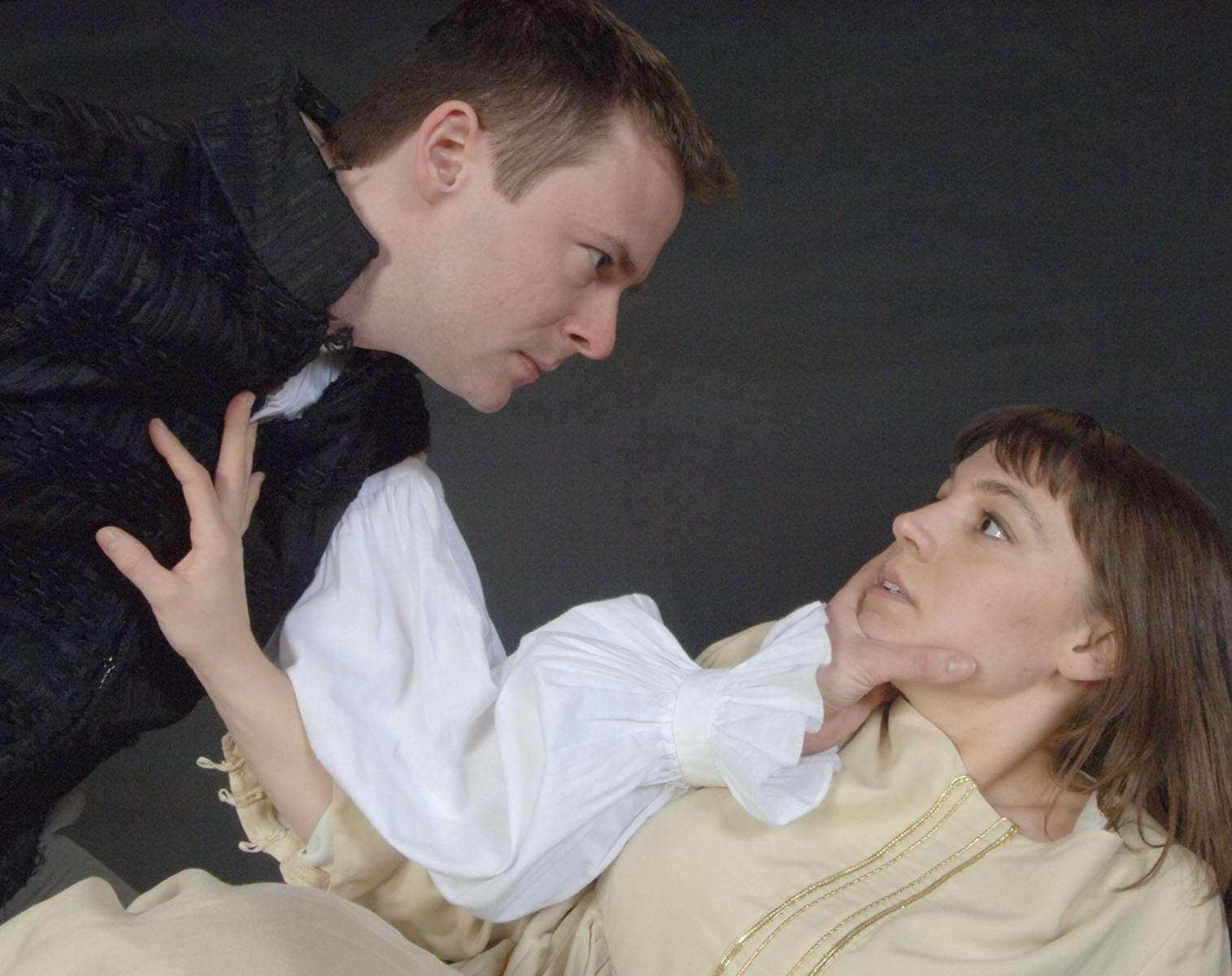 Clarence Wethern and Lindsay Marcy in Hamlet. Photo ©2011 Act One, Too, Ltd., courtesy Theatre in the Round.

Someone put into words for me the other day one of the many challenges inherent in putting on a production of Hamlet, including the really fine production currently running via Theatre in the Round Players (TRP). They said, “A lot of the people who come to see the show, come because it’s Hamlet. And a lot of the people who stay away, stay away because it’s Hamlet.” A mixed blessing, and a shame, because honestly, if you’re going to see any Hamlet, you should see this one at TRP.

Why? Because director Matt Sciple didn’t direct “H-A-M-L-E-T!”  He directed Hamlet. I can almost imagine a scenario in rehearsal in which he must have said something like, “I know it’s impossible, but let’s try to forget all the other Hamlets we’ve seen on stage or on film, and let’s just do this play Shakespeare wrote that happens to be called Hamlet. Like we’d do any other play. Let’s just dig in and find the human guts of the thing. If we treat all the characters like human beings who have relationships with one another, and don’t get lost in the poetry, and keep this incredible plot moving along at the steady clip it demands, then we really can’t go wrong.”

Which is exactly what everyone who does Hamlet should do, but which almost nobody ever does. It’s so ridiculously simple, you’d think somebody else locally would have done it by now. (Perhaps they have. It’s entirely possible I just haven’t seen it. You can’t swing a dead cat in this town without hitting someone who’s doing a production of Hamlet. After all, we’ve known the cast of the production going up at the Jungle in August, since January. I just saw and reviewed another Hamlet last June. 3am Productions did one in May 2009. And that’s just the ones that occur to me off the top of my head from the last two years.) It’s understandable that a theatergoing community could be suffering from “Hamlet fatigue.” Or that they figure, “well, if I miss this Hamlet, that’s OK, there’ll be another one.”

Except of course there won’t. Every theater production is unique, and once it’s gone, it’s gone. Which is why I ran into a gentleman the other evening who admitted, “It’s my third time seeing this production of Hamlet. It’s the best one I’ve ever seen. And I’ve seen a couple at the Guthrie [for the record, that’s very possible—they’ve done it in 2006, 1988, 1978, and 1963]. But this one…” And if a testimonial from a Hamlet addict isn’t enough for you, I, as a non-Hamlet-addict, am happy to weigh in and back the man up.

For the uninitiated (and really, are there any who would even be reading this review?), Hamlet is the story of young Prince Hamlet’s ill-fated quest to revenge his father’s murder. The king was killed by his own brother Claudius (Tom Sonnek), who then usurped the throne and married Hamlet’s mother, queen Gertrude (Colleen Barrett). The ghost of Hamlet’s father (Milton Papageorge—and really, how cool a name is that to have when you’re playing the ghost of Hamlet’s father?) appears to Hamlet (Clarence Wethern) and commands his son to avenge his murder. Almost no one in the kingdom is spared by the fallout from this battle of wills.

After “Hamlet fatigue,” the biggest hurdle to performing Hamlet is to avoid “PERFORMING H-A-M-L-E-T!” Yes, it’s one of the most famous plays in the English language. Yes, the best actors of their various generations have tackled the title role. Yes, much of the audience not only knows everything that’s going to happen, some of them also could recite the lines along with you. It’s Mount Everest. You do it because it’s there. But the play only works if it’s actual people talking to one another.

Time and time again in TRP’s production of Hamlet, I was pleasantly surprised by how human (and thus accessible) it was. The ghost of Hamlet’s father turns for the first time to speak to Hamlet and…wow, no declaiming, no attacking or caressing each and every friggin’ syllable of every word. They’re just going to talk to each other? That’s…perfect. Hamlet falls to his knees at one point and wraps his arms around his father’s waist, a child burying his face in his father’s comforting form, crying for the parent he has lost and misses so much. The ghost puts a consoling hand on his son’s head and shoulders, and I’m reminded, “Oh, that’s right, this is a parent and their child I’m watching. How did I forget that in all those other Hamlets?”

Later, Hamlet confronts his mother. The young man’s clearly coming unglued, and then the ghost of his father reappears. Queen Gertrude can’t see the ghost of her dead husband, so now she’s really convinced Hamlet has lost it. But yet again, at every point in the scene, I’m aware that, royal titles aside, this is a mother and a son, talking about the husband and father they lost, and the man who has tried to replace him on the throne and in their family. Their concern for each other is grounded in something human and genuine. The poetry of the language, when done right, when done this way, only reinforces that.

And Ophelia. Oh, poor Ophelia. The often thankless task that many an actress has had to slog through over the centuries playing Ophelia. Here again, in this production, with this Ophelia (Lindsay Marcy), every time I braced myself for disappointment, I got a great character and a great story instead. Hamlet has been courting Ophelia, but her brother Laertes (Nicholas Leeman) warns her, as does her father Polonius (Charles Numrich), that Hamlet, being a prince, and a man, has a lot more latitude to screw up in matters of love than she ever will. When tragedy strikes their family and in response Ophelia goes crazy, the inevitable mad scene here, in this production, works in a way I’ve never seen it work before. It’s once again because of human connections. Even when Ophelia is doling out flowers to those at court, each gifting is specific to those receiving. I almost chuckled at the perfect little moment when nutty Ophelia shoves flowers into Claudius’ hand, as if to say, “Gee, thanks for your enormous part in helping flush my family down the toilet.”

Everyone here does such lovely, funny (who knew Hamlet could be so entertaining?), human work that it seems a shame to cherry-pick just a few names out of such a solid ensemble. (I’m just going to throw out the other names I haven’t specifically noted elsewhere, since they all deserve a nod, too, often for multiple roles throughout the night—David Beukema, Adam Briesemeister, Katherine Kupiecki, and Steve Ramirez.) One of the many reasons this production works as well as it does is that everyone up on that stage is part of a larger community. Everyone is related, however tangentially, to everyone else. One person falls, and it has a domino effect on the whole palace, in ways both subtle and huge. There are no stars here. You really do get the feeling that this is a group effort, and they all rise or fall together. And they rise, and rise, and rise.

But I’d be remiss if I didn’t talk just a little bit about Clarence Wethern’s turn as Hamlet. Damn. Clarence is probably the actor who surprised me the most, in an evening full of pleasant little surprises. Take that first “big speech” when Hamlet is finally left alone after his stepfather/uncle Claudius has enjoyed his big coronation moment in the sun. Clarence buries his head in his hands and when he stands up and turns around…wait, a minute, is he crying? Oh, right, this guy’s father just died less than two months ago. Of course he’s a wreck. Hamlet isn’t just sullen. He’s inconsolable. It’s that evidence of Hamlet’s innate humanity, again and again and again throughout the evening, that had little lightbulbs going off in my head. “Oh, THAT’s what that moment’s about! Now I get it!” The poor guy’s just trying to find someone he can trust when the murderer of his father is sitting on the throne. Apart from Horatio (David McMenomy), Hamlet gets let down again and again. You can see that it breaks his heart, and makes him that much more desperate, when his old school chums Rosencrantz (Rachel Weber) and Guildenstern (Derek Washington), and even Ophelia, seem to be working with Claudius and Polonius.  He asks them for the truth, he clings to hope, but then must face the reality that he’s in this alone.  What can I say? When Wethern portrays Hamlet, I understand, and I care. It’s the perfect antidote to “Hamlet fatigue.”

Honestly, this makes me so sad I missed Matt Sciple’s King Lear at Starting Gate. The next time I hear he’s directing a Shakespeare play, whatever it is, count me in, I’m there.

If you’re going to see a Hamlet this year, and you should, see this one. Very highly recommended.