You can slice and dice the evidence any way you like – the bottom line is that women still earn less than men, both in Minnesota and nationwide. That’s the conclusion of the “Status of Women and Girls in Minnesota” report issued in June.

How are women and girls doing in Minnesota? That’s the question for the 150+ page report issued by the Women’s Foundation of Minnesota and the University of Minnesota Humphrey Institute’s Center on Women and Public Policy. This is one of a series of articles beginning with data and questions from the “Status of Women and Girls in Minnesota” report.

Economist Evelyn Murphy, president of The Wage Project, estimates that over a lifetime (47 years of full-time work) this gap amounts to a loss in wages for a woman of

Minnesota established a Council on the Economic Status of Women back in 1976, with membership divided between legislators and “public members” appointed by the governor. Its mission was “to study all the issues related to the economic status of women,” and its first director was Nina Rothschild. In 1983, the Council became the legislative Commission on the Economic Status of Women, with only legislative members. At about that time, Aviva Breen became its director, remaining in that position for 18 years.

In an interview, Breen recalled that the first bill she testified on was a 1984 proposal to abolish the tip credit. The tip credit is the law that allows wait staff to be paid less than the minimum wage. Minnesota abolished the tip credit in the 1990s, said Breen, after about a decade of debate.

More women historically work as wait people and they don’t get a high wage and need tips to make a wage. If they work at Joe’s Diner or in an Iron Range town in a small café, they’re not making big tips. They’re struggling to support families – so it’s a very big issue.

So many of the issues, particularly the economic issues, are still the same. When I first started working on this stuff, we had buttons that said 59 cents. I suppose when it was 59, we would have thought 77 was pretty good. But it’s still not the same.

Why do women earn less? Discrimination is the obvious answer, but other factors could also affect earnings. Women who are mothers, for example, may take time off from careers to raise children. That may affect their seniority in, for example, large law firms, and mean that they earn less.

Of course, large law firms make up a tiny percentage of the work world. Most women and men work in considerably less classy and lucrative jobs. While seniority may make a difference in highly-paid professional jobs, it matters less or not at all in lower-paid jobs. According to the report:

When the federal Government Accounting Office (GAO) controlled for [race, parental status, occupation, employer, hours worked, and other factors] such as type of position, job tenure and work force absences, they concluded, “Even after accounting for key factors that affect earnings, our model could not explain all of the difference in earnings between men and women.” (page 11)

Up to 40 % of difference is unexplainable. We know that discrimination, blatant or subtle, comes into it. … There’s still lots of work to do. That’s the bottom line.

In Minnesota today, women make up a majority of the workforce, 50.8 percent of all workers. They are a majority in all age groups except 25-44 and over 65. Despite their high rate of participation in the labor force, women earn less than men with comparable education and experience. Take a look at the table below – only Hispanic and Native American women earn more than men in the same subgroup, and no one earns as much as white men. 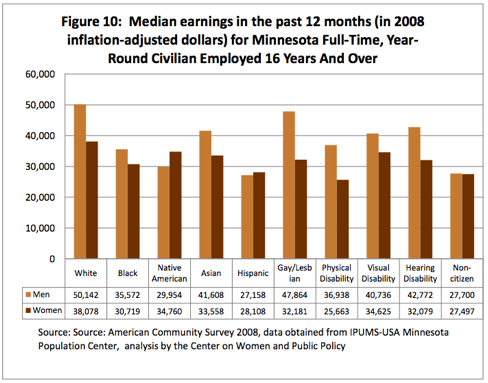 Education, community and social services and healthcare support (e.g., nurses, medical assistants) are three traditionally female sectors. The Center on Women and Public Policy report looked at these three sectors. In education, women earn 78 cents for every dollar earned by men. In community and social services, the gap is 88 cents to the dollar, and in healthcare support, the gap is 89 cents to the dollar. The gap in these lower-paid, traditionally female sectors is somewhat les than the 77 cents to the dollar gap for all full-time workers, but there is still a gap.

Not only do women earn less for jobs in the same sector, but traditionally female job sectors are lower-paying. According to the National Center on Pay Equity:

Breen said that the “Status of Women and Girls in Minnesota” report had better information than the Commission could have produced, but that they did other work that is no longer being done:

We used to hold public hearings all over the state. We went everywhere. We would hold a public hearing on “what are your issues?” Are there systems that don’t work for women, what programs are helpful, do you have difficulty collecting child support, are the education programs at technical colleges available to you. At that time there were problems because programs were men’s programs or women’s programs … a lot of different struggles.

We had an 800 line – we would find out because people would call up because we were a free line to the state and the phone book said women, and they would call up with all kinds of questions and issues that could be fixed legislatively.

We published a lot of legal rights brochures and distributed them widely.

In 2005, Minnesota’s Commission on the Status of Women was downsized to a legislative Office on the Economic Status of Women (OESW), with only a single staff member. “It was a similar economic situation to what we are in now,” says OESW Director Amy Brenengen. “The state was in a deficit and needed to make reductions, so they reformulated the commission into an office.” That office is part of the Legislative Coordinating Commission.

The first is the growing number of boomer women and older women. “Many of them will have been in and out of the work force,” she said, “so they may not have the earnings to support themselves and their families. They didn’t have jobs with pensions, and many who are 65+ right now didn’t work. They may be widowed, they may be single, so they might have to find a job right now – which is pretty difficult for anyone to do, particularly the older population.”

Single women with children, who make up a significant proportion of Minnesotans living in poverty, also face hard times in the near future. Brenengen noted that the slow recovery from the current recession “is going to hit particularly single women with small children dramatically. … Many are losing their jobs, many are losing childcare. If you don’t have childcare, it’s difficult to work, and if you don’t have work you can’t maintain your childcare.”

Brenengen agrees with the report’s findings, saying that “it’s important to remember that though women have made progress, we certainly have not reached full economic parity and much work remains to be done.”