A few days ago a major typhoon struck the Philippines and then Vietnam, with another smaller storm heading in roughly the same direction. At about the same time, a tropical cyclone hit Somalia and killed at least 100 people there. The United States is not unaffected by the impacts of large tropical storms. There is reason to believe that tragedies like these may become more common or more severe with climate change. We must first address the urgent needs of the people in the affected areas, but it is also true that events like these and the voices of the victims must drive our continued commitment to address climate change preemptively.

Yeb Saño, the Philippines’ negotiator at the UN Climate Talks, found himself in the position of addressing an international body about the damaging effects of climate change while his own family was living in the affected area. We should take our lead from him. When he gave his address to the gathered representatives from around the world, he announced a hunger strike on behalf of his people which he would continue until the UN group completed the job they had convened to do. Saño’s brother, along with his fellow citizens, was occupied with recovering the dead and helping the survivors while Saño himself sought international recognition of the climate crisis; he was moved to say, “The climate crisis is madness.”

The exact nature of future storms is uncertain, but there are four lines of scientific evidence that hurricanes will be more of a problem in the future than they were in the past.

First, sea levels continue to rise, so the same storm ten years from now vs. ten years ago will have significantly greater impact. Sea level rise was a significant factor with Superstorm Sandy and Katrina, and was likely a factor in the high death toll and extensive damage caused by Haiyan.

Second, large storms are likely to produce more rain over a broader area because a warmer atmosphere contains more moisture; large storms will bring increased inland flooding, a major cause of damage, injury, and death in tropical storms and cyclones.

Third, increased sea temperatures may generate more intense storms. This seems to have happened with Katrina and Haiyan; the sea surface temperature drives the storm’s formation, but in these two storms the sea was unusually warm at a greater depth, several meters, causing those storms to become much stronger than they otherwise might have been. Recent studies have shown a strong association between sea surface temperatures in the Pacific and the cumulative strength of the storms that happen in a given year. 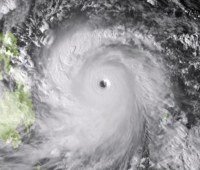 Fourth, and less certain, is the possibility that there will be more hurricanes and typhoons. One of the best models for predicting past hurricane frequency predicts that this will happen in the future, and by the way, that model predicted the current relatively anemic Atlantic storm season with good accuracy. Major tropical storms occur with highly varying frequency from year to year, so it is difficult to identify any trend over just a few decades for which there are good records, but the climate models are increasingly accurate and they suggest that globally we can expect an uptick in frequency.

It is often said that it is impossible to link a given weather event with climate change. This is no longer true, if it ever was. The typical climate for a region or a season tells us what weather is “normal.” Climate change is pushing us into a new normal; the climate has warmed, there is more energy in the atmosphere, the jet streams have changed their configuration and are thus more likely to stall weather patterns as happened this year in Calgary and Colorado. This is the new climate, and thus, there is a new normal for the weather in any given region or season. It appears that the new normal is now, and will increasingly be in the future, one with a significantly greater threat of damage, injury, and death from major tropical storms and other severe weather events.

There are many approaches to addressing this problem, but most of them start with one initial step: stop denying the importance and reality of the accepted science of climate change. This is something individuals must do, the media must do, and politicians and policy makers must do. This is something that must start now, and really, should have started years ago.

Bad storms have always happened. But, to ignore the fact that humans are making them worse is certainly, as Saño put it, “climate madness.”