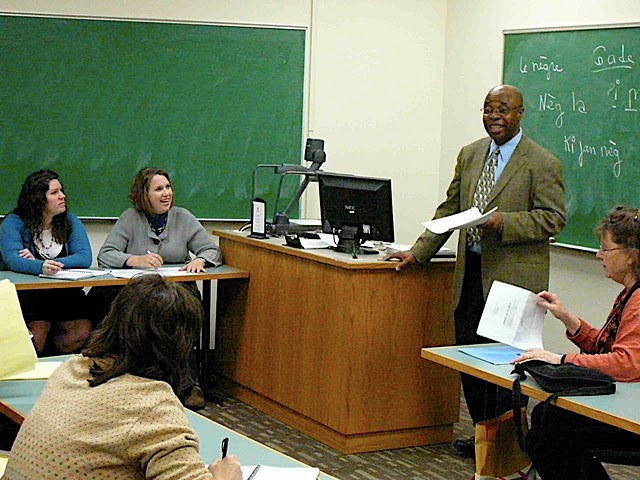 Two students running late timidly enter the doorway of this basement classroom at Hamline University and search for available seats. They are the last of the stragglers who’ve packed into the overflowing space, lured by the opportunity to learn Haitian Creole, the primary language of Haiti. Instructor Max Adrien acknowledges the late-comers with a smile and wonders aloud if they should move into a larger classroom. After a brief pause to gauge the class sentiment, everyone seems content to squeeze into the existing space so as to not risk slowing the momentum of the day’s lesson. With the minor logistical matter settled, Adrien smiles with satisfaction and launches back into his lively review of Haitian greetings.

Despite the space limitations and challenges of dealing with a large class, Adrien’s energy level and enthusiasm never seems to wane throughout the entire hour of teaching. The expediency with which he moves through the hour lesson suggests he’s making up for lost time. In fact, the urgency likely extends from the focus of the class, which is to teach Haitian Creole to humanitarian workers and volunteers preparing to go to Haiti.

Adrien, who teaches French at Hamline, was born and raised in Haiti and quickly put together the Haitian Creole class a little over three weeks ago. He says he wanted to find a way he could contribute to the rebuilding of his home country after its devastating earthquake in January.

“I want to give them something Haiti has given me from birth, which is the language,” Adrien said of his students. “Those people are the medium through which I feel I’m giving back to Haiti.”

Adrien does not get paid for teaching the class, and it is free for the approximately 29 students who have been showing up each week, most of whom are associated with various local aid groups currently working in Haiti. There are also a handful of Haitian-Americans and Hamline undergraduates who have joined the group. They come every Tuesday morning from all over the greater metro area to learn basic conversation skills in Haitian Creole, but with a curriculum geared towards the situations they might encounter while doing aid work in Haiti.

“I’m so excited,” said Donna Richtsmeier, a volunteer with St. Joseph the Worker parish in Maple Grove that has been doing relief work with a sister parish in the town of Bouzy in Haiti. “I’ve never learned a foreign language before and I’m trying desperately to learn a little bit more so I can converse with the students and people in Bouzy.”

Richtsmeier has been to Haiti three times before the earthquake and expects to go again soon on a medical mission with the church. While her group benefited from having a translator in the previous trips, she hopes that being able to communicate on her own, even just a little, will allow her to meet different people in the community.

The class is one of only a handful of places to learn Haitian Creole, a patois of French and other languages, in the United States. Adrien had secured a classroom at Hamline on short notice after lobbying the department chair. He also has drawn upon some of the teaching materials he used at Tulane University in New Orleans where he helped establish that school’s Haitian Creole program while working on his PhD.

Adrien admits he was not initially sure if there would be much interest in the class and did not know how to promote it outside of the university. After two Hamline professors showed up out of curiosity for the first class, the local Alliance Française chapter helped to spread the word about class and eventually got the attention of local residents who had been or were planning to go to Haiti to assist in the rebuilding.

Mary-Fred Watkins, who hopes to go to Haiti to work on sustainable agriculture projects, said the initial classes focused a lot more on background information on Haiti but this week’s lesson was more language intensive.

“Today was a whirlwind of words and words and phrases,” she said.

Haitian culture and history are often referenced in the class to add context to the language. However Adrien says he makes a particular point to examine Haitian culture because unlike more familiar cultures in Western European, he believes it is an important opportunity to teach the greater public the cultural achievements of Haiti and correct what he sees as the media’s focus on negative and inaccurate aspects of Haitian history. Although he says he is heartened by the worldwide outpouring of support for the small nation, he is upset that the media continually emphasized how Haiti status as the poorest country in the Western Hemisphere.

At one point during the lesson, Adrien talks to the students about the reparations the major Western nations forced onto Haiti after the country’s revolution from France that crippled its economy. He says Haiti, which is only 30 years younger than the United States, is rarely credited for its achievements, like being the first independent black nation in the Western Hemisphere.

“The slaves who revolted against their oppressors erected Haiti as a symbol of black freedom,” Adrien said.

The Haitian Creole class will continue until the end of the semester and a summer class is being offered through Hamline University. The summer class won’t be free, but students can receive college credit for it. Adrien says he is hopeful to continue teaching next year because he knows Haiti will need the help of many people for decades to come.