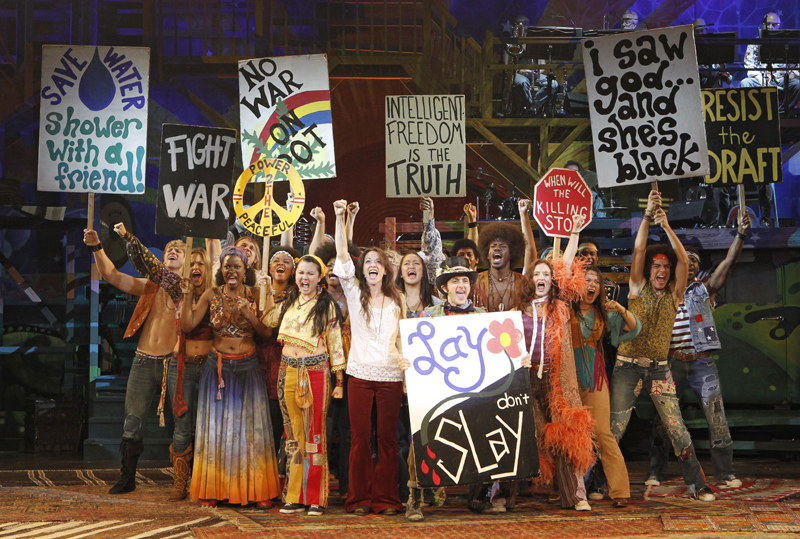 I first experienced Hair at the age of six, when my mom popped in a rental of the 1979 film adaptation in order to teach me about the hippie culture of her youth. Entranced by the nudity, the swearing, the drugs, and the trippy dream sequences, I later tried to buy the video at Suncoast. Embarrassed, my mom told me never, ever to tell people she had shown that movie to me at such a young age. (Careful, moms: your kids might grow up to be writers, and tell people everything.)

Being that the movie version of Hair essentially taught me everything I know about sex, war, and drugs, I was thrilled to finally the see the theatrical version. When I showed up, I saw that my enthusiasm had been rivaled—I hadn’t even bothered to dress in hippie garb. On Tuesday night there were flower children running around all over the Orpheum Theatre; after the curtain lifted, I saw that about half of them were in the cast.

I got ready for my actors in the audience and my naked people, and the play delivered. The actors were dancing everywhere, handing out flowers and even hugging audience members. Then, right before intermission, BOOM: everybody was naked. Dicks and boobs everywhere, for no particular reason. The whole thing was a bit much for me, like a ploy for actors to get even more attention than they already get on stage. But I’d be lying if I said the many Baby Boomer ladies in attendance didn’t like those young man-booties shaking in their faces.

As the play went on, I realized that I had been naive to think that it would be just like the movie. The film has a concrete and engaging plot, where the main character, Claude, is a country bumpkin headed for war and distracted by a bunch of paisley-wearing bums in the city. That wasn’t happening here. Claude was just another version of the main character Berger, and the story was distilled into lazy love triangle: how gauche, in an era that supposedly celebrated free love. But that wasn’t this production’s fault. Apparently, most theatrical productions of Hair are simply an amalgam of songs performed by a crowd of actors in bell bottoms, without a deep or multidimensional story. (At least Claude isn’t an alien in this production, as he was written in an at least one version.)

Although the play will never rival the movie, it was an enjoyable experience, with fantastic vocal performances by Caren Lyn Tackett as Sheila and Darius Nichols as Hud. But if Hair is to remain relevant for a younger generation who no longer find shock value in nudity and drug references, it’s going to have to be adapted into productions that tell a meaningful story with real, fleshed-out characters.