Mifta Abdu Nahi and Meriyema Muhammed, Iman Mohamed and Ahmed Gedi, among the first homeowners committed to buy the townhomes through Habitat for Humanity. Below: The chief executive officers of several Twin Cities companies cooperated in building garages for the Old Third Townhomes. Other teams were hanging drywall inside the units and doing other chores. (Photos by Margo Ashmore)

Ahmed Gedi is already a Northeaster reader, in an apartment on Washington Street NE. His wife and children came to America 10 years ago, and himself, five years ago, seeking better life. “Our house will be the base of our family.” The children will go to high school and then college, and always be able to come back home, he said.

This he told a tent full of Twin Cities company CEOs volunteering with Habitat for Humanity at the eight townhomes on Old Third Avenue, Oct. 10, as they stopped for lunch. He talked a little bit about acclimating to culture, how while he is now educated as a social worker, his wife Iman Mohamed “is born a social worker. Thanks to her,” what he used to think odd, or oppose, he now finds agreeable. And everyone chuckled.

“I give special thanks to the volunteers working in my home. It is as if they were building their own house,” Gedi said. As do all Habitat homeowners, Gedi, Mohamed, and another couple, Mifta Abdu Nahi and Meriyema Muhammed (at left in the lower photo with Mohamed and Gedi), work alongside volunteers for at least a set number of hours. The women also brought traditional foods to supplement Macy’s catering for the lunch.

Saint Paul Mayor Chris Coleman stopped by to wish everyone well…Minneapolis Mayor R.T. Rybak was out of town.

Doug Baker of EcoLab co-chaired the event with Richard Davis of US Bancorp. Davis suggested that all the CEOs open up Habitat opportunities to all of their employees as well. “People give with their heart first, and then their money.” He said US Bancorp takes part in a dozen Brush With Kindness sites each year (also a Habitat program, providing smaller maintenance and accessibility projects) and they intend to move up to building an entire house.

Davis acknowledged 3rd Ward Minneapolis City Council Member Diane Hofstede, who was involved in the many permutations the project went through before final approval. They chatted after the speech-making.

Mary Tingerthal, head of the Minnesota Housing Finance Agency, shared a story about growing up without building skills. Once she’d learned a few things on Habitat builds, her father, who was quite good at carpentry, gave her a framing hammer. 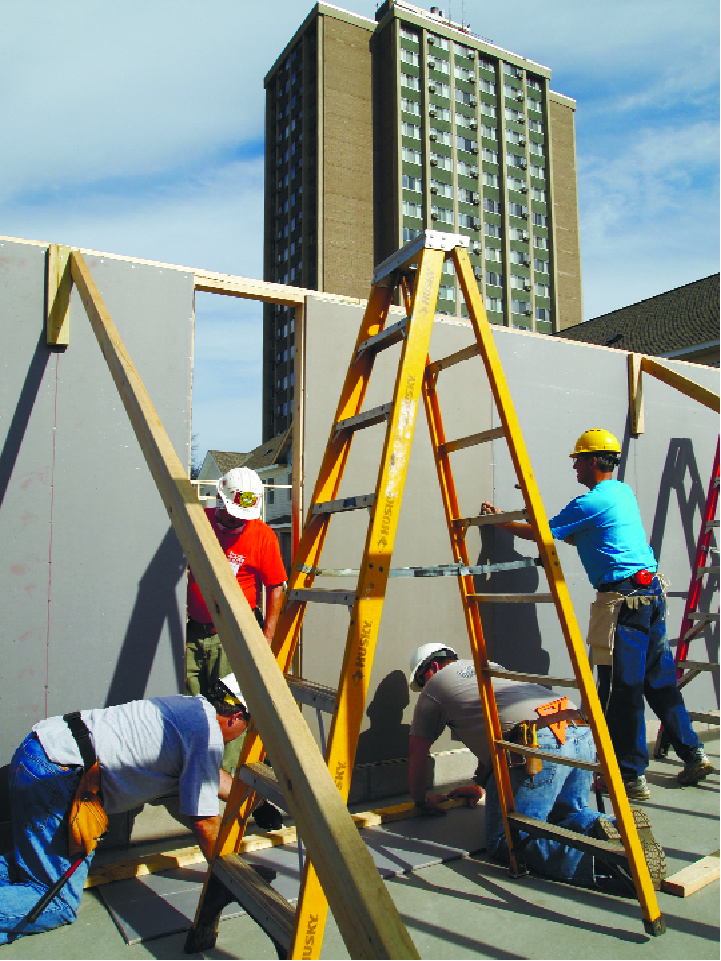 Left: The chief executive officers of several Twin Cities companies cooperated in building garages for the Old Third Townhomes. Other teams were hanging drywall inside the units and doing other chores.

The townhomes at 929 Third Ave. NE, all in one building with entrances facing Central Avenue, share green space with the high rise apartment building Spring Manor at 828 Spring St. NE. They have detached garages entered off the alley behind Quincy Street and other uncovered off street parking.

Matt Haugen of Habitat said the exterior construction goes pretty quickly, and that the more painstaking work of interior finishing will go on through winter. The units may be occupied in late spring or early summer, 2012.