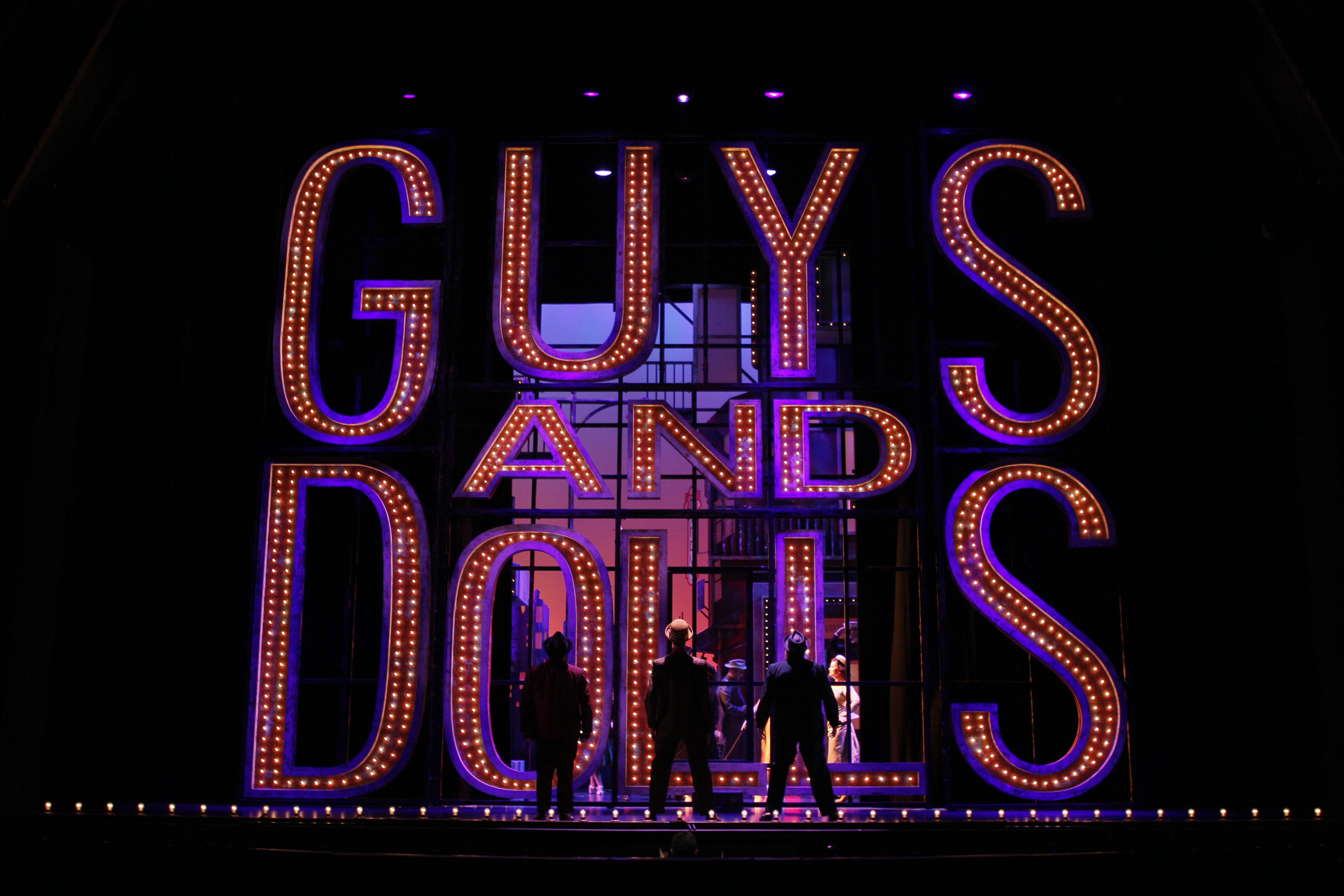 Under the direction of Peter Rothstein, the Ordway’s production of Frank Loesser’s classic Guys and Dolls successfully showcases all the slapstick charm and bright lights of the original, albeit a little unevenly.

It takes well into the second act to witness the real star power in this cast, except in the case of Billie Wildrick as Miss Adelaide: when she appeared onstage for the first time, asking some of her backup dancers to order her “a tuna on rye and a chocolate sundae with tomato ketchup and mayonnaise,” Wildrick made the entire audience start shuffling through their playbills searching for more information about this comedic dynamo. Like a blonde Betty Boop come to life, Wildrick was so endearing I found myself wishing that Adelaide and her Hot Box dancer’s numbers like “Take Back Your Mink” and “A Bushel and a Peck” were a bigger part of the show.

Jo Swerling and Abe Burrows’s adaptation of Damon Runyon’s short stories makes for a simple, well-framed story that makes good use of its characters: Boy and girl have opposing viewpoints and conflicting lifestyles. They collide as the result of an unlikely bet, have their heads spun and their faith shaken respectively, and eventually (spoiler alert) fall in love. While you do find yourself rooting for these crazy kids to get together, the clipped dialogue and over-emphasized old New York accents only work to loudly advertise how antiquated the show is.

It doesn’t help that some of this production’s actors don’t loosen their delivery to give those lines a bit of modern breath. Though her singing voice is pure and focused, Katherine Strohmaier as Sarah Brown is particularly stiff in her speech, expressing her lines with a weird affectation that makes her sound like Wendie Malick doing a trans-Atlantic accent for her prep-school production of Sunset Boulevard. It’s a sensible way to play it, since the character of Sarah Brown is sort of a soul-saving buzzkill and changing that speech pattern by the end of the show could have served as a way to demonstrate her transformation—but unfortunately the accent remained throughout.

Strohmaier made a worthy foil for her romantic counterpart Matt Farnsworth as Sky Masterson, who resembled a confused looking Baldwin brother (Billy, maybe?) but managed to create some convincing onstage chemistry. Sky is saddled with having to say things like “You don’t wanna get mixed up with the likes of me. A guy like me is no good.” It’s hard to take that seriously and even Sky himself doesn’t seem to believe it, but during the intro to “I’ve Never Been in Love Before,” Farnsworth begins to shine and carries the slick likeability of Sky front and center in rousing dance number, and one of the show’s most recognizable songs, “Luck Be a Lady.”

One of the cast’s most natural and skilled performances comes from Tony-winner Clayton Corzatte, who unfortunately occupies a fairly small role as Arvide Abernathy. His one solo “More I Cannot Wish You” is a charming highlight of the second act, leaving the audience feeling like a kindly old security guard has just sent us on our way with an Irish blessing. Todd Buonopane as Nicel-Nicely Johnson is also a wonderful surprise, and not just due to the fact that I recognized him as Jeffrey Weinerslav, the GE human resources person from one of my favorite episodes of 30 Rock. Johnson brought the house down with the fast-paced favorite “Sit Down, You’re Rockin’ the Boat.”

Visually, there is never a dull moment on stage. Kate Sutton-Johnson’s evocative set design features a floor to ceiling illuminated sign bearing the show’s title; it’s well-used throughout all the scene transitions, taking us from Manhattan to Havana in one fluid motion. Gregory A. Poplyk’s costumes are bold and purposeful, accentuated by rich choices in color and accessories that communicate which of the gamblin’ guys is a high roller and which is little more down on his luck. It could be easy to venture into cartoonish territory, especially with the trio of Nicely-Nicely Johnson, Benny Southstreet, and Rusty Charlie (looking every inch like they were being reunited for the first time since performing as Scarecrow, Tin Man, and Cowardly Lion), but Poplyk manages to show restraint while still keeping things exciting.

There are more hits than there are misses, but the story of Guys and Dolls is lacking a bit in terms of takeaway. Is it impossible for a show set in the mid-1930s that hasn’t undergone an update in 60 years to compete with the spectacle and salaciousness current audiences are accustomed to? Despite excellent performances from some of the cast, in this production of Guys and Dolls the spark is never really fanned enough to turn into a flame.﻿