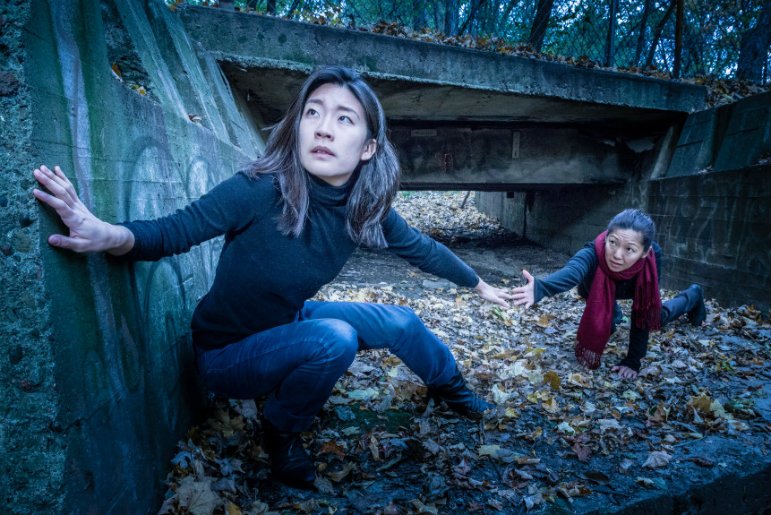 Audrey Park and Sun Mee Chomet starred in Mu Performing Arts' production of "You for Me for You." The play was performed at the Guthrie's black box Dowling Studio.

This week the Guthrie Theater announced a new program to increase accessibility to its high quality, normally highly priced shows. New Artistic Director Joseph Haj is being heralded on City Pages for his “game-changing” Level Nine Initiative, which includes lower ticket prices in the Dowling Studio to $9, and committing to producing work that highlights diverse voices.

I should be clear about my bias and context: I studied theater in Minneapolis, and I’ve attended a variety of shows at many venues in the Twin Cities. Although I don’t claim any expertise, I have noticed something frustrating and off about this praise from City Pages and elsewhere.

I was never a fan of the Guthrie. The theater has beautiful performances, but personally, I never found them particularly challenging, provocative or risky–not my kind of theater.

This is not to mention I wasn’t very interested in the Guthrie’s repertoire: Broadway musicals like “The Music Man,” “My Fair Lady,” nostalgic hits like “Roman Holiday,” “Pride & Prejudice” and at least two of the top-tier Shakespeare plays per year.

To a progressive young person coming into feminism and anti-racism, I saw the Guthrie’s limited scope of shows for what they were: a bunch of White People Plays, shows representing a limited era, as if the only plays worth putting on were the same shows that have been popular for decades, highlighting the hilarious or poignant struggles of white people with money and social drama.

This is not to say white people or stories about them are bad. They’re not. I’m a white person, and I don’t think my story is bad or boring.

Especially when you look more specifically at the “financial barrier” the Guthrie presents.

There are three stages at the Guthrie: the McGuire Proscenium (which seats 700), the Wurtele Thrust (which seats 1,100) and the Dowling Studio (a smaller black box theater that seats 200). Ticket prices change with each show, and there are savings programs, like the 30 Below, which offers cheaper prices to patrons under 30, and savings for students and seniors like most theaters.

But for the best seats in the house at the Thrust, you might pay as much as $74 for one ticket.

Also to keep in mind, the Guthrie was criticized for lack of representation of women in their season just a few years ago. No woman were directors, playwrights or any other significant contribution to the artistic direction of the massive, slow-moving ship that is the Guthrie. The Guthrie doesn’t have the best track record.

So when Joseph Haj became the new artistic director last, I was intrigued. A man of color with a commitment to more “plural voices,” and reaching out to new audiences? That had potential in my mind. Post-Pericles, we see Haj’s first big move to make the Guthrie more inclusive by this Level Nine Initiative, but I’m complaining about it nonetheless. So what’s my problem?

My problem is the money.

Tickets for the Thrust, as I mentioned, go as high as $74, but as low as $19.50 (for a season ticket holder in a bottom-tier seat). And with 1,100 seats, you start to realize just how much money the Guthrie is dealing with. If the average ticket were $35, which is probably low-balling it, the Thrust can bring in close to $40,000 for a single performance, for a sold-out show on a Saturday night.

The Level Nine Initiative is lowering the cost of tickets to the Dowling Studio, the smallest venue at 200 seats. And you know how much those tickets cost right now? Around $16. So, at least to me personally, that doesn’t really mean much. And anything less than a program like Mixed Blood’s “Radical Hospitality,” offering free admission to all of their shows, is not really getting at the heart of economic accessibility.

Another aspect of this program City Pages writes about is about how the Guthrie is great because it’s starting to bring in more diverse voices. But the Guthrie has already been doing this in the Dowling Studio, for at least the last couple of years. For example, last year and this year the Guthrie hosted Mu Performing Arts, and they’ve recently invited artists like Sha Cage and several others as well.

But that’s part of the point. What we normally get to see, “Cat on a Hot Tin Roof,” “The Crucible,” the White People Plays list goes on, those are still the plays taking center stage in the heart of the Guthrie. More people by far see those plays still, and the Guthrie makes way more money on those kinds of shows.

And who sees those plays? Who is the Guthrie’s audience? Mostly wealthy, mostly older, mostly white. Pretty much mostly all white.

And amazing-sounding works like last year’s Sha Cage storytelling show “U/G/L/Y” or the upcoming Jackie Sibblies Drury’s “We Are Proud to Present a Presentation About the Herero of Namibia, Formerly Known as Southwest Africa, From the German Südwestafrika, Between the Years 1884-1915?” Where do those shows go?

They get to go in the 200-seat black box theater.

The Guthrie does not sacrifice anything with these $9 tickets.

They are going to keep generating millions of dollars of revenue per year with pretty, easy, mainstream work. They are going to continue getting pats on the head for all these game-changing moves, that don’t really matter that much.

And all the while, actual community-driven and diverse theaters like Mixed Blood in Cedar-Riverside, and Intermedia Arts in Lyn Lake are not going to be lauded with praise and million-dollar grants.

If the Guthrie really wants to show up for their Minneapolis community, they don’t need to open up their pretty, shiny building for “happenings” in response to things like Ferguson or Jamar Clark’s non-indictment. (Letting ‘those people’ try out a seat at ‘the table.’)

Despite what you may see on Facebook or in the City Pages, the Guthrie is not a beacon of progressive values and radical practice.

It’s just a big ol’ money-making machine. Until that becomes a serious part of the conversation, they have not done enough.