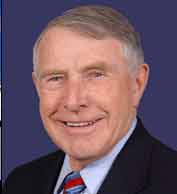 Surrounded by family and friends, a tearful Congressman Martin Sabo announced Saturday that he would retire from office at the end of the year. “In my gut, I know the time is right,” he said at a downtown Minneapolis press conference. “It’s time to open the door for a new generation of leadership.”

Sabo, who represented Minneapolis in the State Legislature from 1960 to 1978 and in Congress for the past 28 years, called his years of public service “an unimaginable dream,” but declined to offer any specific reasons for his abrupt announcement, which caught even the most well-connected local Democrats by surprise.

The longtime incumbent faced no serious opposition to his re-election in November. Activist Jack Nelson-Pallmeyer and Green Party leader Jay Pond had announced their candidacies in recent days, but Sabo occupied one of the safest seats in the House.

“It’s an instinct, a feeling,” he explained. “It was a decision that evolved. I made the final decision last week.” Asked whether he was frustrated by the intense polarization that has characterized the Congress over the past 10 years, Sabo acknowledged, “that’s part of it.”

The 68-year-old proclaimed himself to be in good health and promised to energetically work for the DFL nominee who emerges from what is likely to be a bruising race to succeed him. He declined to say whether he would throw his support behind any candidate prior to this spring’s endorsing convention.

Sabo praised Sylvia, his wife of 42 years, and his daughters, Karin and Julie, before thanking his many political mentors, including former governor Wendell Anderson, former congressman and Minneapolis mayor Don Fraser, and a host of former state legislators and congressman from his “class of 1978.” Forty-three Democrats were elected to the House that year, he noted. “I’m the last Democratic member of the class serving in the House.”

Describing his proudest accomplishments, Sabo pointed to the so-called “Minnesota Miracle,” the 1971 legislation that revolutionized state funding for education and local governments, but he also praised the landmark 1993 budget deal that created the largest deficit-reduction package in history.

“But these historic accomplishments also remind us that progress can be reversed,” he said. “Elections do matter. The work of politics and government never ends.”

Though he said he planned to remain active in the Democratic Party and on issues of peace and fiscal policy, Sabo added that he looked forward to a more leisurely schedule come January. “I want to spend time with my grandchildren, cheering for the Minnesota Twins, hitting a golf ball, and seeing more of America,” he said.