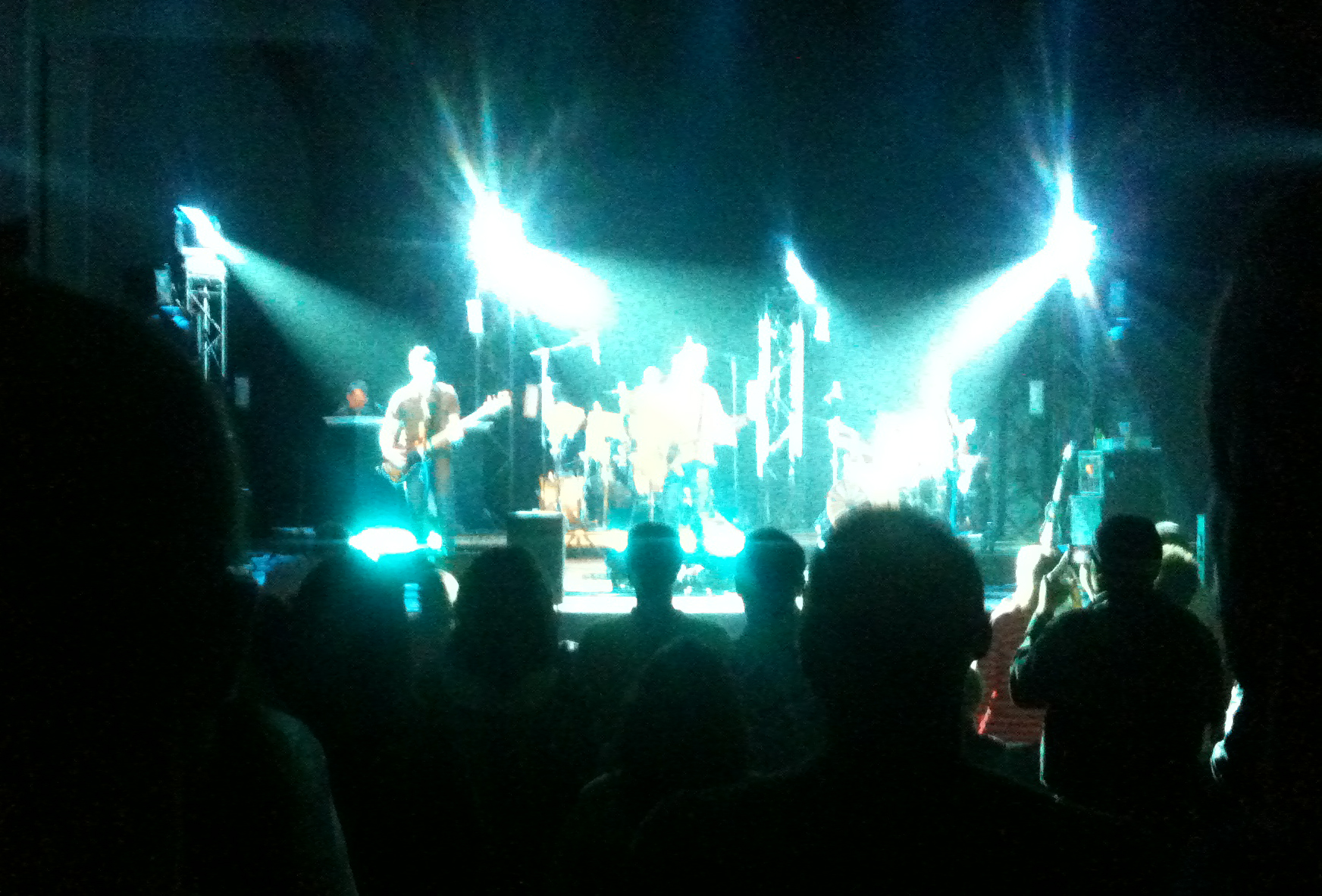 Photo by Jay Gabler, with cell phone. (Our photographer lost her car keys, so a guy does what he can.)

“Hey,” sighed Guster‘s Ryan Miller as he donned a keytar at the State Theatre on Friday night, “whatever it takes. Gotta keep it fresh.”

It was the second time I’d seen the popsters play, and though Miller was in a notably better mood than he was several years ago when I saw them at Harvard’s Tennis Center, Friday’s show confirmed my impression that Miller is a surprisingly thorny live performer with an ambiguous relationship to his audience. Despite this—or perhaps because of it—Guster have a reputation as an unusually strong live band.

Unless you were hoping for “Careful” or “One Man Wrecking Machine”—two of Guster’s best and most beloved songs—the Friday show, which attracted a generously packed house at the 2,200-seat venue, didn’t disappoint. Guster’s special gift is to suspend accessible melodies above dynamic but lucid arrangments that rise and fall in all the right places. Their long song “Come Downstairs and Say Hello” (from 2003’s Keep It Together) is a textbook example of a multi-part song done right, and for its opening, Miller opened his arms to welcome a ukulele that descended from the rafters on wires. Whatever it takes.

The set list, which opened with Keep It Together‘s gentle “Ramona” and went immediately into “Barrel of a Gun” from 1999’s Lost and Gone Forever, favored the three most recent albums in the band’s six-disc catalog. Numbers from their most recent disc, the appropriately titled Easy Wonderful (2010), were received politely, but the new album hasn’t grown on fans as quickly as its predecessors did. (“I’m giving it another chance,” said a friend of mine at the show.)

Near the show’s conclusion—just before an “anti-encore” for which the band encouraged the crowd to grow silent while they waked offstage, then boo when they returned (Miller flipped us a pair of birds for our efforts)—Miller thanked the crowd. “It’s great,” he said, “that we’re old and we put out all these records and we keep coming back and you keep buying tickets.” I’m not sure if you can play the “old” card when Michael Stipe is 12 years older than you and he jumps on more monitors in his sleep than you do in your whole show, but never mind that—Guster are a band who keep growing, and keep us guessing. I’ll come back for more of that.

Openers Good Old War were almost eerily well-chosen: their three-part harmonies and buoyant melodies are strongly reminiscent of Guster’s, though their sound also recalls pre-rock country and folk music, which makes them apt contemporaries of their equally hirsute contemporaries in many of the bands who will be joining them at Coachella in April. On Friday night, Good Old War were unsurprisingly well-received, especially when they shamelessly covered Simon and Garfunkel’s “Cecilia.” Whatever it takes.