Michelle walked toward Bill’s Gun Shop carrying a black handbag in one hand. In the other, inside a secure case, was the black handgun she borrowed from her father.

The self-described “hippie” was there because she felt she had no choice. The man in prison for stalking her is set to be released later this month and made it clear in a recent court hearing that he knew where she worked and planned on paying her a visit.

“This isn’t the way I operate,” said Michelle, who asked her full name not be used for fear of reprisal. “I feel like my hand has been forced. Someone is coming to kill me, and it’s shattered who I was as a person.”

While the unimposing blonde wouldn’t describe six hours learning to protect herself with a handgun as her ideal Saturday, it was worth the trouble.

It wasn’t until the 2003-04 session, the last time Republicans controlled the Minnesota House of Representatives, that current carry laws became a reality for Michelle and gun owners across the state.

Now, after regaining control of both chambers of the Legislature, state Republicans are making a point of expanding gun rights in the state once more.

And Minnesota isn’t alone. Midterm elections across the country brought a significant change to Congress and many state Legislatures, and those changes have already resulted in aggressive new pro-gun legislation throughout the country. 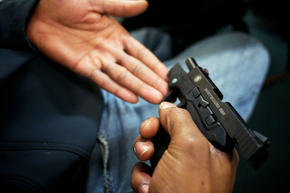 And while these laws already exist in many states, Minnesota’s Republicans have been forced to wait for a majority to make their move.

Since passing the current handgun carry law in 2003, Republicans gave up control of the House and have lost seats in both chambers in every election.

Last November was a different story, however, when conservatives rushed back into power, gaining 25 seats in the house and 16 in the senate – taking control of both.

And they didn’t waste much time in their effort to help Minnesota catch up with other states’ gun laws.

“In this past election it was all about jobs,” Citizens for a Safer Minnesota Executive Director Heather Martens said. “Many of the people that voted [based] on jobs were unaware that there was this extremist agenda.”

Opponents of the bill to eliminate state background checks, like Martens, warn that relying on the federal background check alone could mean missing some mental health reports and misdemeanors, which they said are crucial elements when determining if a person should be allowed to own a firearm.

Currently, applicants must get a permit from local law enforcement by passing the state background check and then go through a separate federal check while at the gun store.

People with certain mental health illnesses have been federally banned from purchasing guns since 1968, but it wasn’t until passage of the Brady Bill in 1993, which also prevented felons from purchasing guns, that the federal background check was established.

Minnesota Sheriffs’ Association Executive Director James Franklin said the state does have a system that mirrors the federal one, but he points to examples where both state and federal checks have flagged items the other missed.

“The question really boils down to – can we as tax payers afford a dual system, and is the process of a dual system and dual checking worth the extra money?” Franklin said. “It is a fiscal policy issue, bottom line.”

Franklin estimates that local police spend about one hour working on each check, which costs the county or city that runs the check about $50.

After hearing from police officers who told her that the extra information is important and that the time it takes is worthwhile, Kahn was convinced the state check should be kept in place.

“When you’ve got the police and the liberal Democrats on the same side, you’ve got a coalition that has a little bit of strength,” Kahn said, before adding that Republicans control the debate.

“That’s a problem,” she said, “if the Republicans are unanimous about that, they’ll just get it passed.”

Some pro-gun advocates argue that the only people that lawful checks prevent from securing handguns are law- abiding citizens, and that those carrying out crimes are already buying their guns illegally anyway.

Minnesota is one of only six states without an amendment protecting citizens’ right to bear arms.

Joseph Olson of the Gun Owners Civil Rights Alliance said that although redundant, state amendments are a safeguard for citizens should the U.S. Supreme Court take aim at the Second Amendment.

Olson referenced the narrow victory for gun rights in the 2008 U.S. Supreme Court ruling in District of Columbia v. Heller, in which the court ruled that the Second Amendment protects a person’s right to possess a firearm for private use within his or her home.

The Heller ruling marked the first time the Supreme Court decided whether the Second Amendment protected individual rights to keep and bear arms for self defense.

After the decision, it was still unclear whether the Second Amendment applies to individual states. In the 2010 case McDonald v. Chicago, the Supreme Court ruled that the Fourteenth Amendment extends that protection to the states.

Martens, with Citizens for a Safer Minnesota, worries that, while not very impactful on its own, the state amendment could be used as a basis to expand the right to carry to those who currently are not permitted, like felons and the mentally unstable.

If the amendment is adopted, it would bypass the governor and go directly onto the ballot for the 2012 election. The amendment would need a majority of all voters to pass, so a ballot left blank would count as a “no” vote.

In 1998, Wisconsin passed a similar amendment to its constitution with 74 percent of the vote.

“It will probably be adopted this year to go on the ballot in the 2012 election,” Olson said of the Minnesota version. “There’s nothing really different between Wisconsin and Minnesota.” 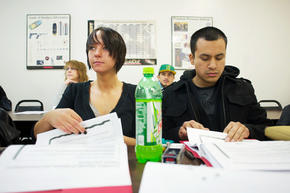 In states where the laws already favor gun owners, legislators are pushing rights even further.

Republicans gained control of 14 statehouses in the 2010 elections, and they now control both chambers in 26 states.

In Colorado, Utah and Wyoming, lawmakers are hoping to establish a different interpretation of the Second Amendment by passing bills that would allow citizens to carry firearms without permits.

In each of the three states, conservatives took a majority during the last election or significantly strengthened their holds.

Even to some pro-gun advocates, these bills come as a surprise, especially in the wake of the Tucson, Ariz., shooting that killed six people and injured 13, including Congresswoman Gabrielle Giffords.

After the shooting, U.S. Sen. Chuck Schumer, D-N.Y., called for a new look at possible laws that would limit high-capacity magazines — like the one used in the Tucson shooting, which held 33 rounds of ammunition. But Schumer wasn’t optimistic about the proposal.

“Let’s be honest here – there haven’t been the votes in the Congress for gun control,” Schumer said in an appearance on “Meet the Press.”

Even in Arizona, Republicans have continued to introduce pro-gun bills. One bill that recently passed the Arizona Senate and is on its way to the House would prohibit state and local agencies from banning guns in public buildings unless those buildings had airport-like security checks.

Another bill in Texas is taking a similar aim and would allow students and faculty who have a permit to bring firearms on college campuses. More than half of the members of the Texas House of Representatives have already signed on as co-authors of the bill.

Proponents say the bill would allow students and faculty to defend themselves in cases like the Virginia Tech shooting.

In states that grant permits to carry handguns, most universities, including the University of Minnesota, have codes of conduct explicitly barring students, faculty and visitors from carrying firearms on campus.

As in individual states, the federal political landscape changed when Republicans took a majority of the seats in the House and gained five seats in the Senate.

The National Rifle Association rates lawmakers and candidates on an A-through-F scale each election cycle – the more pro-gun the candidate is, the higher the grade.

In last year’s election, Congress added seven A-rated senators and 36 A-rated representatives, bringing the total to 312 in both chambers.

A bill currently in the House would make it simpler for those with a carry permit to travel from state to state.

The bill would allow anyone with a concealed carry permit to also carry in states that issue permits or don’t prohibit them. 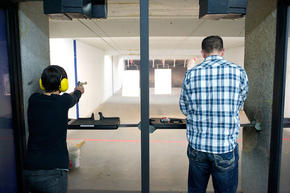 “We want to send the message,” he said, “that it’s a whole lot safer to leave that gun at home than to walk out in the street with it.”

Last year in Minneapolis, 68 percent of homicides were committed with a handgun, and 21 percent of all aggravated assaults were carried out with a firearm.

When Minneapolis City Councilman Cam Gordon heard about the pro-gun bills being proposed, he was worried and raised the issue to his constituents in his e-mail newsletter.

“I was pretty surprised and shocked by all the gun bills coming through the Legislature, and how easy they were doing,” Gordon said. “It’s not a city issue but I felt I had to speak up.”

Gordon points to moments like the recent shooting outside the Brian Coyle Center in the Cedar-Riverside neighborhood as an example of crime that’s intensified by handgun violence.

“There’s this message that you should be able to go get and use guns any way and anywhere you want,” Gordon said. “I think we have to send a different message.”

He has also worried about the possibility of a movement like that of Texas, to grant faculty and students the right to carry on campus.

Johnny Eloranta, a pro-gun College Republican, supports gun rights legislation, especially if that meant students and faculty were allowed to carry on campus.

The junior has grown up with guns his whole life.

“I have been sitting with my dad in the duck blind since I was a kid,” he said.

Like those in Texas, Eloranta and others worry that, especially after the Virginia Tech massacre, campuses and classrooms make for easy targets when guns are banned because shooters are able to prey on the defenseless.

“I think gun-free zones make a haven for the psycho shooters,” Eloranta said. “They can kill a bunch of people that are totally unarmed. They are defenseless – they are sitting ducks.”

In 2003, after the state passed the carry law, the University Board of Regents banned weapons from all campuses and university-related events.

In 2008, following the shootings at Virginia Tech, Rep. Tony Cornish, R-Good Thunder, who is now the chairman of the House Public Safety and Crime Prevention Policy and Finance Committee, authored a bill to remove firearm bans on Minnesota campuses.

The bill, which would only have affected schools in the Minnesota State Colleges and Universities system, didn’t get the support it needed in the DFL-controlled House.

If a bill were to be passed in the state, it is unlikely that it would affect the University.

“Criminals and psychos have the advantage because there is nobody in the classroom to defend the kids,” Cornish said in an interview Tuesday.

“People that are against laws to have guns on campus have absolutely no solutions on hand. In gun-free zones everybody is unarmed and ready for harvesting.”

Cornish said gun bills have been put on the back burner as the Legislature has worked on the budget, but would again be a high priority fiscal issues are resolved.

“I doubt if that will come up this session because we’ve got six other gun bills that we are talking about,” Cornish said.

“And we can only do so much in one year,” he said, adding that a bill eliminating school bans would be passed “sooner or later” in the state.