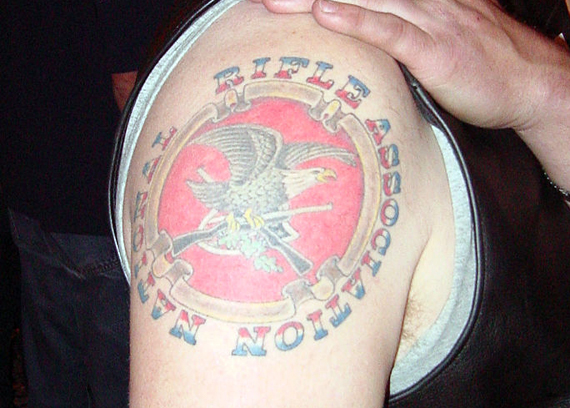 When I was a freshman at Boston University in the 90s, one of the guys on our dorm floor was the dorm’s token Republican—you know, That Guy who worships the Rat Pack and likes to argue politics with all the hippies and hipsters. This guy was smart enough to out-debate most of us on most issues, and he had a dark sense of humor. When December arrived, he bought a couple strings of Christmas lights and put them in his window, spelling three letters for all of Nickerson Field to see: NRA.

At the time I found the stunt amusing, but in the wake of this morning’s tragic school shooting in Connecticut, the image of that window came back to me like a vision from a terrible dream. On Twitter and Facebook, my liberal friends have been preemptively dismissing the arguments they’ve learned to expect from the NRA and its supporters in the wake of such events: guns don’t kill people, people kill people. Guns keep us safe.

Did that guy in my dorm genuinely believe that gun control laws were a bad idea? Maybe, but from his side of the political spectrum, there was hardly a possibility that he wouldn’tsupport the NRA’s pro-gun policies. He was (and, I presume, still is) a Republican. Republicans are against gun control. It’s part of the package. For that guy to put “NRA” in his window was only a slightly more provocative version of spelling “GOP.”

That was at the height of the Culture Wars, during which the right tried to tie political orientation to a set of “values,” to an entire lifestyle that was positioned in opposition to that of decadent liberals. I recently wrote hopefully about the end of the Culture Wars, and we can fervently hope that gun control will now become one of those issues—like women’s rights, like immigration—that ceases to be a wedge issue between the parties. We can hope that Americans from both sides of the red-blue divide will realize that sane gun control laws save lives, and that knee-jerk opposition to gun control in the name of abstract principles—or a misinterpreted constitutional amendment—is a deadly dangerous game to play.

There’s an awkward fact I’ve been skirting: that pro-NRA guy wasn’t just another guy, he became one of my close friends in college. The following year, along with a couple of other friends, he became one of my roommates. The rest of us never came around to his political views, but we liked him as a person. He was a good friend, and though I haven’t seen him in years, I hope he’s doing well. I hope he’s reexamined his views on gun control, and I wish our political culture would make it easier for all the other conservatives in this country to do so without being made to feel like they’re somehow betraying our country’s soul. If you have a soul, how can you consider this morning’s events and decide that what this country needs is more guns?

Originally published in The Tangential