When is a restaurant not a restaurant? When it’s an inscrutably-named software company that has sidewalk cafe tables out front and the smell of cooking emanating from within, but you can’t get any food from them, no matter how hard you try.

“Some days it just breaks my heart,” says David Hussman, owner of DevJam, the Minneapolis software consulting company now commandeering the space recently occupied by Jack’s restaurant and, before that, the venerable Java Jack’s coffee shop at 46th and Bryant. “People are really sad when they realize they can’t get a cup of coffee or a meal here anymore. I live in this neighborhood, too, so I feel their pain.”

That pain, however, didn’t stop him from moving into the space when Jack’s went out of business in April. DevJam had been renting offices on the second floor for the past four years, and Hussman was looking to expand when the opportunity arose. 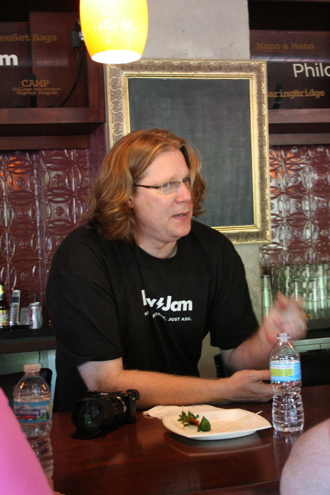 The additionally confusing thing about the location is that Chef Shack, the award-winning food truck business run by chefs Lisa Carlson and Carrie Summer, just started renting the former Jack’s kitchen for its main cooking space. So, it smells like food. It looks like a coffee shop. Neighbors are disgruntled. 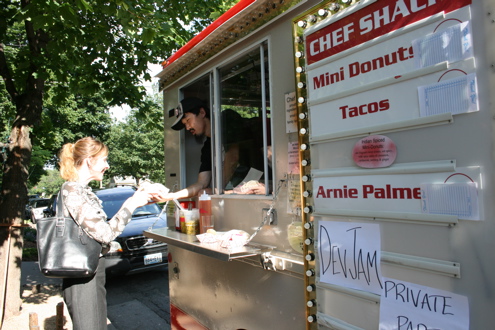 At a recent open house for DevJam, a gaggle of nattily-dressed geeks stood around outside, enjoying a glass of wine and some gourmet Chef Shack snacks. Passersby stopped and asked about the venue, hoping that they, too, could get a drink and an artisanal pulled pork taco. But they could not. 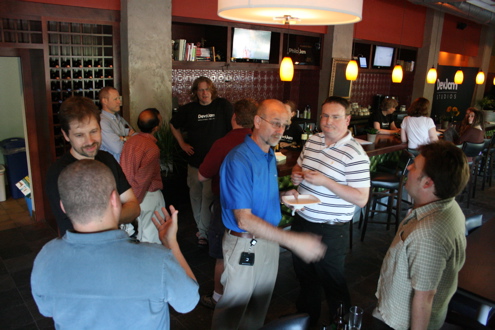 “People come by every day looking for coffee,” says Jennifer Rowdon, who works in logistics for DevJam. “Lots of people. We usually stop counting at ten.” 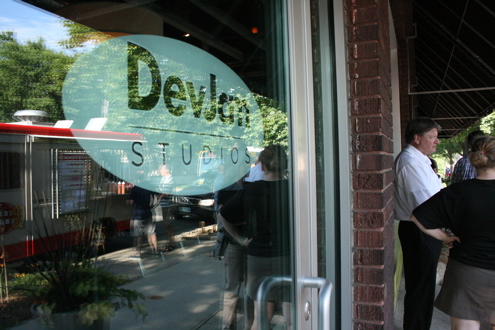 It’s hard to explain to the English-speaking public what DevJam does, but Hussman gave it a try, and I tried hard to listen, despite having already read on their website phrases like, “To improve our ability to add real and lasting value, we interview leadership and teams to learn about you contextually so we can produce a coaching plan which guides our work and allows us to iteratively measure our success.” If you, as did I, once ran screaming from your horrible, boring job in software development, a phrase like that will make you want to run screaming once again. People at DevJam, however, think it’s cool. Their main buzzword is “agile.” 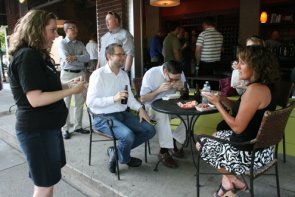 “The ‘agile’ movement started as a reaction to the myth that if you follow all the steps of a development process, everything will turn out fine,” attempts Hussman. “Software development was based on old manufacturing technologies. Agility is about getting projects done in smaller cycles.” He teaches classes in ‘agility’ all over the world, so presumably there are many people who find this concept useful. 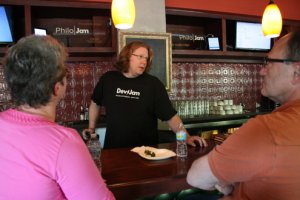 Hussman wasn’t always an ubergeek. He was once a heavy metal musician in an ‘80’s band called Slave Raider, and he ran a recording studio called JoyLab. His Slave Raider alias was Nicci Wikkid, which was maybe a cool name at the time? He now calls himself a “DevDude,” and all the people (men) who work at DevJam are called DevDudes. He does, in fact, bear a resemblance.

“My stepdaughter and her friends used to call me ‘The Dude’ behind my back,” he explains modestly. “Not because I was a slacker who drank White Russians. Because I was an overweight, middle-aged guy with longish hair.”

Hussman’s background in the music business led him to try out another project based on the vibe of the 46th and Bryant location: Twin Cities musician and critic Jim Walsh used to host jam sessions in the basement of Java Jack’s. Now, Hussman and his ilk have forums on “Practical Agility” in the same space. They discuss things like…oh, don’t make me talk about it. If you’re interested, join the group. I’m sure their sessions are just as awesome as Walsh’s hootenannies once were.

It may seem that the hip, nationally-acclaimed Chef Shack gals and the techweenie DevDudes would make odd bedfellows. But deep down, both teams are made up of earnest, creative, hyper-focused, successful businesspeople. Chef Carrie Summer is delighted with her new kitchen facilities, and she’s determined to share her joy with the disillusioned neighborhood. 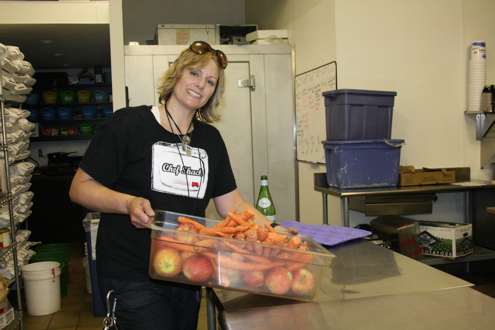 “I’m thinking we might do some dinners in the parking lot behind the kitchen,” she ponders. “I’ve got this 1971 Dodge motor home called Bertha I’m dying to roll out. We could show old-school movies on her side, maybe from the silent film era, maybe some Jane Russell flicks. Serve food out of the truck, maybe do a fundraiser for Share Our Strength.”

She gazes around the parking lot, envisioning. “Lisa and I have these new platters that would hold a nice little chicken dinner for four people. It would be fun to have weekly dinners out here, and make it a regular community gathering.” 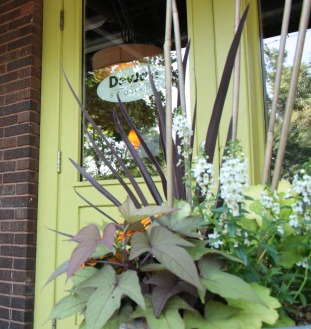 It might take some doing to woo back the neighbors. Catherine Grant, who has lived in the area for fifteen years, misses the atmosphere of the old coffee shop.

“Dogs lounged under the outdoor tables. People brought their laptops, worked, had meetings. The place brought life and rhythm to our neighborhood,” she says. “The change from Java Jack’s to Jack’s was a questionable move and — obviously — not a success.”

Now, according to Grant, everyone walks on down to Patisserie 46 on Grand, and the formerly bustling Jack’s site is “dead as a doornail.”

“It’s a shame that the new tenants aren’t carrying on the café tradition,” she says. “Our neighborhood is now deprived of a perfect location for hanging out. It makes me sad every time I go by.” 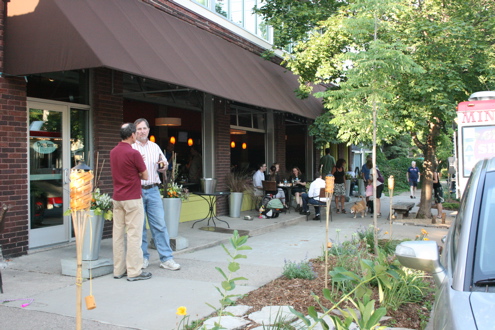 That’s exactly the sentiment that troubles David Hussman. He loves the space for his business, but he doesn’t quite know how to make it up to the neighbors. “People are still welcome to bring their coffee and sit at the sidewalk tables,” he suggests.

What if they wanted to bring their laptops and sit there working, as if it were the old Java Jack’s?

“I’d probably give them our wireless password,” says Hussman. “We really do have the spirit and intention to do the right thing.”