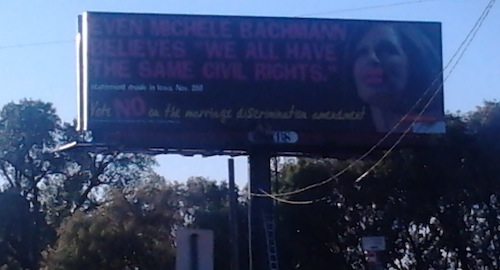 A couple of weeks ago we reported about the fundraising campaign led by Artists in Storefronts’ Joan Vorderbruggen and Cult Status Gallery to raise money to erect a billboard aimed at defeating the marriage amendment. The two organizations were able to raise enough money to hire the Guerilla Girls, renowned public art activists, to create an image for the billboard and an additional image decrying the voter I.D. amendment to be used for posters, as well as the money to rent a billboard on Glenwood Avenue and 12th Street, across the street from Lee’s Liquor Lounge. It stands above a parking lot used by many people who are going to games at Target Field, according to Vorderbruggen.

FULL DISCLOSURE: Sheila Regan has been an artist in Artists in Storefronts, and donated to the Guerrilla Girls campaign.

The billboard image features a quote by Michele Bachmann, as well as her image, with a pink equals sign painted over her lips. It reads “Even Michele Bachmann says ‘We all have the same civil rights,’” which is a quote taken from a forum in Iowa last November. According to the Des Moines Register, high school student Jane Schmidt asked Bachman what she would do to protect Gay Straight Alliances in high schools and support the LGBT community, to which Bachman responded:

Vorderbruggen said that the Guerrilla Girls didn’t want the focus to be on slamming Michele Bachmann, or on supporting her opponent. Rather, “it’s trying to show that the issue is a civil rights issue,” Vorderbruggen said. “My personal feeling is that it’s a billboard that really has a strong backbone.”

Bachmann actually opposes allowing gay and lesbian couples to marry, as the transcript of the Iowa forum goes on to show.

JANE SCHMIDT: Then, why can’t same-sex couples get married?

JANE SCHMIDT: Why can’t a man marry a man?

BACHMANN: Because that’s not the law of the land.

JANE SCHMIDT: So heterosexual couples have a privilege.

BACHMANN: No, they have the same opportunity under the law. There is no right to same-sex marriage.

Recent polls show that the voters are narrowly divided on the marriage amendment issue. “We’re getting really close,” Vorderbruggen said. “People need to put aside the left or right of it. This is about discrimination.” 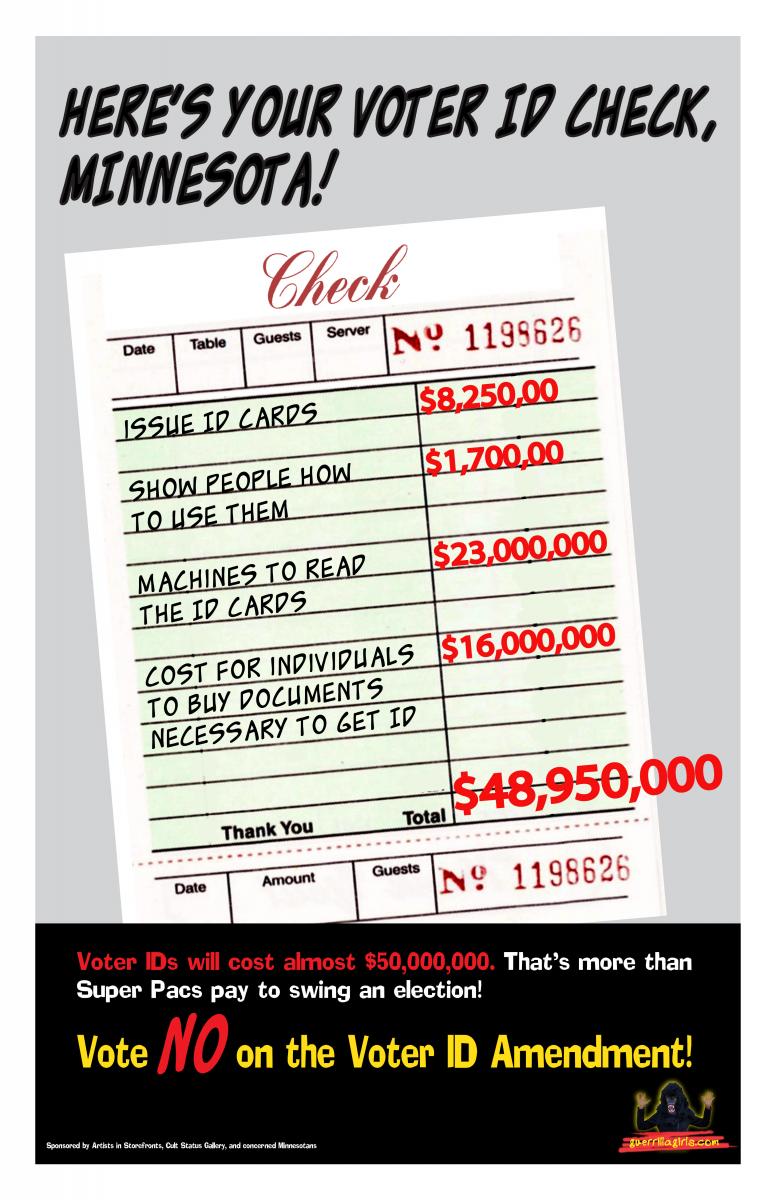 Initially, Vorderbruggen hoped that the billboard could speak to both amendments, but the Guerrilla Girls ended up focusing on the marriage amendment. However, they have made a second poster image about the voter I.D. amendment.

The poster is a picture of a receipt, with the words: “Here’s your voter ID Check, Minnesota!” and lists the costs that would come with the voter ID amendment, listing a total of $48,950.00. At the bottom it says: “Voter IDs will cost almost $50,000,000. That’s more than Super Pacs pay to swing an election!”

The cost of voter ID is in dispute. An MPR article states that while Secretary of State Mark Ritchie says they will cost the state $50 million, some activists say it will cost more, while those in favor of the amendment say it will cost much less.

Vorderbruggen said she has 500 anti- voter I.D. posters, which are 12 inches by 18 inches. She’ll be passing them out at a happy hour celebration at Lee’s on Monday, and will take some with her as she drives to Duluth and then Grand Marais.