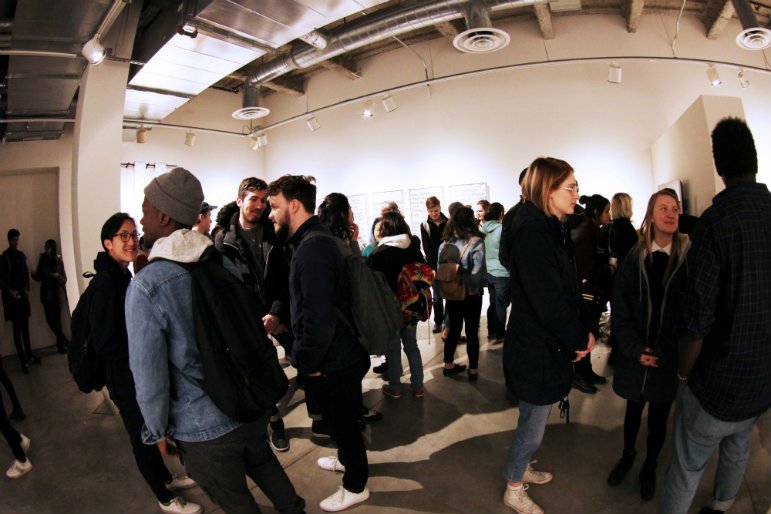 Minnesota College of Art and Design students gather at a recent gallery opening on campus. Photo taken by Nikki Rykhus

When the Guerrilla Girls, the masked troupe of activist/feminist artists, visited the Minneapolis College of Art and Design (MCAD) during their Twin Cities Takeover this year, sophomore Bethany Johnson was one of the many students in the audience. She remembers when the Guerrilla Girls presented a poster featuring a weaponized “estrogen bomb.”

“That was the first point when people started to express discomfort,” she said.

To the Guerrilla Girls, who got their start in New York in 1985, it was just a bit of visual humor–a prod at the patriarchy. But to the transgender and gender-nonconforming students in the audience, it didn’t seem funny so much as tone-deaf–and, frankly, insensitive.

Johnson identifies as a queer, cisgender woman, and the presentation made her uncomfortable, too. She and a group of transgender, gender-nonconforming and allied students sent the Guerrilla Girls an email expressing how they felt about the presentation and what they thought the group should be more conscious of. They were disappointed with the response.

“They said, basically, ‘Oh, well, it was a joke. Why can’t you take a joke?’” Johnson said. “But isn’t that what people were told when sexist jokes offended them?”

It was a little of- key, she felt, as a presentation for student artists in a gender studies class. Several email exchanges later, Johnson felt as though the issue was never really resolved. The Guerrilla Girls never formally apologized, and they never got to have an open discussion about what happened. They were contacted, but were busy with other projects and declined to comment on this story.

This reaction in itself got its own share of reactions from students and faculty at MCAD.

“All I can say to that is that I felt proud of my fellow students,” Sara Suppan, a recent MCAD graduate, said. She helped organize the collaboration as a student intern and later went on to host her own show called “Self/Concept” in February”—a presentation on the intersection between art and identity. The interplay between who you are and what you do, she said, is a big part of her generation’s activism.

“The students were aware of a binary use of gender,” Morgan said. 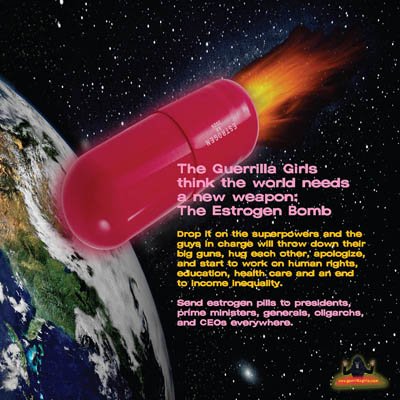 And that was a good thing, she said. She hoped it would inspire their own take on Guerrilla Girls tactics and socially-conscious art. As the class visit went on, the students were asked to pair up and think of some ideas for artwork that focused on a social issue. Johnson and her fellow students formed their class group on transgender and gender-nonconforming issues. But by that point, she said, the shock-value slogans and one-liners felt a bit trite.

“I thought it deserves more discussion than putting a sticker somewhere,” she said.

All of this happened on the heels of some serious class discussion on the subject of gender, art and social activism, one generation of feminists interacting with the next. Heading up the Guerrilla Girls collaboration was Megan Johnston, a lifelong activist who taught a gender, art and society class at MCAD. During her time teaching the class, transgender issues came up and were discussed, she felt, pretty openly. She said it gave her a window to what was important to the next generation of feminists.

“I learned a lot as a teacher,” she said. Her biggest concerns for the course were what the new, “Fourth Wave” of feminists would look like, and whether or not the women of this generation were even interested in carrying the movement forward.

But she did have a few misgivings about who was getting pushed, and how hard. During the Guerrilla Girls’ Twin Cities Takeover later that year, she witnessed what she perceived to be a lot of “angry, strongly-held views” when what they wanted was “debate and discussion.” She felt that rather than participating in an ongoing dialogue, the students were shutting it down.

“What we got was a closed space, which, reflects the current political climate,” she said.

Johnston recognized the confrontational methods students were using, and knew they were legitimate and tested. Malcolm X’s revolution, she said, didn’t come peacefully. Not without a real and impassioned attack on ideas. What she doesn’t understand is why the targets of that attack had to be the Guerrilla Girls and third-wave feminism.

“Everyone at the steering committee tried to embrace the discussion. You’d think feminists are going to be the first people to stand up for transgender rights,” she said. “Aren’t we the ones fighting with you?”

The fact is that feminists have not always been the first ones to stand up for transgender rights. Feminism, as a movement, has been historically dominated by white, cisgender women, and it’s still not totally up to speed on including the stories, trials and concerns of all women, and feminism in the arts is no different. Andrea Jenkins, a poet and advocate as well as a person of color and a transgender woman, can attest to that.

“Feminism has been exclusionary toward black women’s issues, and as a subset, transgender women of color, too,” she said. While she personally has enjoyed some success and representation in the local art community, she knows that’s not typical.

“More generally and broadly, there has been a lack of opportunity for transgender women in woman-driven productions,” she said. “There is an extreme wealth of talent in the transgender community. I think the approach to inclusion needs to be intentional.”

Equal representation, Jenkins said, was not something that was just going to happen naturally, with time. Inclusion has to be a strategy. This is something the Guerrilla Girls know themselves. One of the things that makes their art so unique is the fact that they don’t just point out inequality in museums and galleries; they keeping pointing inequality out until they get the result they asked for. Over three decades, as their work shows, the needle hasn’t shifted that much toward gender equality in the arts scene.

The point behind the posters: if you’re serious about fixing this, we should be seeing some bigger changes.

That needle has shifted even less when it comes to women of color and transgender women. Gallery representatives at the Minneapolis Institute of Art and the Minnesota Museum of American Art reported that whether or not artists are transgender is just not something they keep tabs on–not that they’d actively exclude a transgender artist.

It’s the same story at the Minnesota State Arts Board, according to executive director Sue Gens.

“We do try to track various groups served by the arts board,” she said. There are a series of boxes each artist and grant applicant can check off if they choose to–gender, disability, race, ethnicity. This gives the board a sense of which populations they’re serving. However, they don’t have statistics on how often they serve transgender artists.

“I think the goal is not to judge people based on their gender,” she said.

“Those transgender and gender-nonconforming students felt their values were not considered,” she said, and they felt that they didn’t have a figure that represented them within their school’s own faculty. To that effect, Jenkins will be teaching a poetry course at MCAD in the fall–which is, at least, a start.

“I don’t think you can call it feminism if it’s not inclusive to transgender and non-gender identified women. I think that’s antithetical to third-wave feminism ideals,” she said.

In spite of disagreements, none of the parties involved were interested in discrediting the work the Guerrilla Girls have done for underrepresented groups. The Guerrilla Girls’ impact on feminism and feminist art has created a respected place for them in the art world, and their efforts have impacted and inspired other artists.

At the same time, there was also a general recognition that there was room within feminism and feminist art to improve and expand.

“As a 46-year-old feminist, I understood the second wave and was part of the third wave,” Johnston said. “I’m also educated in and acknowledge the history feminism had before the third wave, and all the complications of that movement.” She’d had her doubts about the protests that’d been directed at the Guerrilla Girls, but she maintains that “all activism is good.” And the issues that 16- to 25-year-olds are concerned about now, she said, are going to be the most important issues 20 years from now.

Even then there will be more on which to improve.

“There were important things to talk about in teaching an older generation of feminists what young people care about,” Suppan said. “That can be a generalization, but every new generation has barriers to cross.”

For now, the discussion continues, and the needle shifts–slowly.

“Change happens really slowly sometimes, for better or for worse. As a society, we’re concerned about inequality in a way that isn’t going away,” Morgan said.

But the major difference in philosophies here seems to be less about whether or not things can change and more about how long it’s acceptable to wait for that to happen. Feminism is a centuries-old movement. How long should transgender women wait to be universally included in that fight?