A sign at its city limits proclaims River Falls, Wisconsin, to be “building an inclusive community.” According to Mayor Don Richards, it is more than a pretty sign.

Not long after being elected in 2004, Richards says he learned the National League of Cities “would send you a pretty sign if you wanted such a sign on your outskirts, and you have to [say] what you as a city did to encourage diversity.”

However, before River Falls got its sign, the process “turned out to be fairly controversial,” Richards says. First, the city council questioned the sign’s “building an inclusive community” wording. Then the chancellor of the University of Wisconsin at River Falls (UWRF) wanted the sign on the same post as the UWRF sign.

One city council member argued against the sign. “He just figured it wasn’t necessary,” Richards says.

The River Falls city council eventually voted 6-1 to approve the sign, which was located on the north end of town, says Richards. “Since then, we put [up] two more – one on the east [side] and one on the southwest [side]. We have all of our major entrances covered.”

“There are six or seven communities in Minnesota that have that sign,” claims Richards, adding that only River Falls and one other city have them in Wisconsin. “Madison doesn’t have it. You’d think of any city in this state to have this sign, they would. Maybe they think it isn’t necessary.”

“People [of color] will make choices to come here [to UWRF] based on how they feel out in the community,” says UWRF Chief Diversity Officer Craig Morris.

UWRF’s student-of-color population is around nine percent, says Special Assistant to the Chancellor Blake Fry. Richards notes, “Our [city] population is approximately 14,250, but we get to count 50 percent of the university’s population – at least 3,250 are college students.” 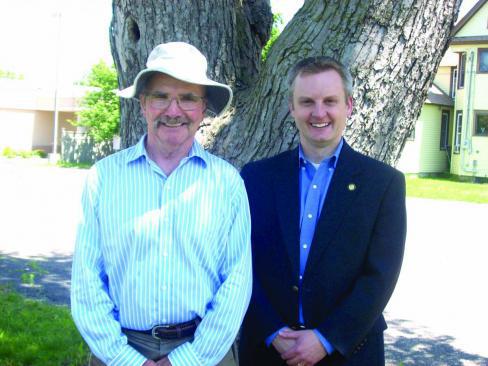 “I think for the most part [the local business community]” supports diversity, says Richards. “We didn’t get any overt resistance, [but] we don’t do much to actually test that theory.” After conducting a city survey, he adds, “We’ve found complaints of students [of color] being followed in local stores, and [the stores] not having products that were good or useful for them, such as hair products, etc.”

Although the city is predominantly White, “I have found that there is a sincere effort and commitment [in River Falls] to diversity and to welcoming students of many backgrounds, and a real valuing of that diversity,” says UWRF Chancellor Dean Van Galen. “Are we perfect? No. But I think there’s real commitment of being a place that makes all students feel welcome and comfortable.”

According to the mayor, his city is far from perfect in that regard. This past May, a former UWRF Black faculty member who stills lives in the city was “victimized” by River Falls police, Richards reports.

“We have a very good police chief, and I don’t think incidents like that happen very often,” the mayor says. However, after reports that another native Kenyan had been stopped by local police, Richards says, “I think there’s some profiling that is going on right here in the area.”

Van Galen says he was “encouraged” by how a campus racial incident was quickly handled. “We had some race-based graffiti last fall found in a bathroom in our library,” he explains. “It was very specific in its threat, [and] I met with students of color and heard deep concern about how could this happen. I think what impressed me the most was the way our campus – people of all colors – reacted. There was a tremendous standing up against hate.”

UWRF Assistant Student Support Services Director Torrion Amie also remembers a 2003 racial graffiti incident at a local restaurant’s restroom. “It was there for a while,” recalls Amie. “To me that was a direct reflection on how the community views Blacks.”

But Richards adds that incident was the impetus for later establishing a city diversity committee. The 15-person group that is composed of city and UWRF officials, business people, and others has made a difference in the city, the mayor believes.

Morris adds that the city’s diversity committee “has gone out of its way to make sure that shop owners and merchants in town have a variety of products that cater to a much broader audience and customer base. A lot of work has gone on in this community over the last three years to make sure that businesses understand that the boundaries of this campus aren’t really boundaries.”

On working with UWRF officials in creating a welcoming off-campus environment, “Our big problem is to get more involved than we are,” claims the mayor. “In all of our minds, we haven’t found enough to do.

“I think we need to be a little more pro-active and do more, either in educating or influencing our business people in town about diversity issues,” surmises Richards, “or encouraging people to go to the celebrations that are put on campus that have to do with diversity.”

Finally, he believes that UWRF should continue playing a big role in diversity efforts both on and off campus. “I’d like to see more speakers of color show up here on a regular basis,” says Richards, who adds that UWRF coaches could “do more active recruiting [or student-athletes of color] than they do.

“We don’t have a lot of college-level Black athletes in town. I don’t see them going up to [Minneapolis] Patrick Henry or Minneapolis North. I think that would be a step in the right direction.”

“We want to get more students of color from the Twin Cities to come here,” agrees Morris.