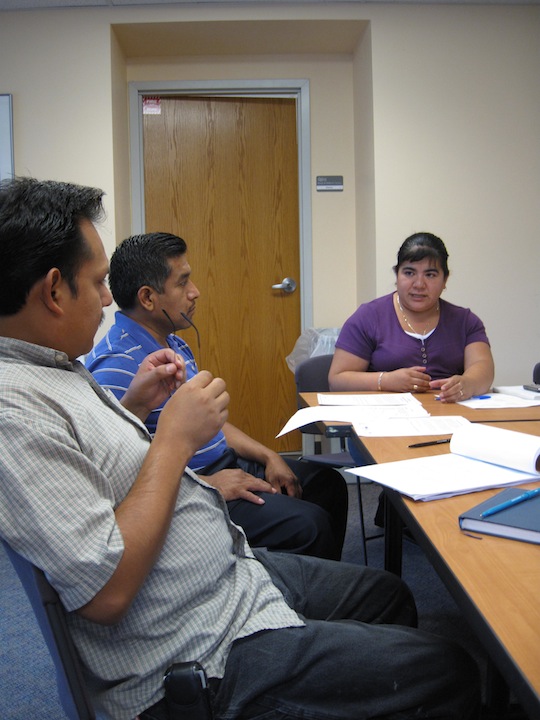 On Wednesday August 18, a group of organizers met at Family and Children’s Service on Lake Street to discuss progress in their campaign to bring municipal identification cards to Minneapolis.  The group, called I am Minneapolis/ Soy Minneapolis has been working to build allies and convince city officials of the benefits that municipal IDs would bring to citizens of Minneapolis, both immigrants and the general public.

Maria Zavala, from Family and Children’s Service, said that a municipal ID would give community members “the power to be involved in civic life.”  The idea is that the list of documents accepted at the city level would not be as extensive as obtaining a state ID.  It would also not take as long to obtain.

Examples of where a municipal ID would be helpful, Zavala stated, would include providing identification for homeless people, who have no permanent address and need photo ID to get food from a food shelf, college students from out of state who find it difficult to get a state ID, and immigrants from other countries who though they have a consulate ID or birth certificate from another country, can’t obtain a state ID.

However, Zavala said that in addition to those particular interest groups, the Municipal ID would benefit all Minneapolis citizens.  The cards could be used as a library card, and as a debit card that could pay for Nice Ride, Metro Transit, or parking meters.  Zavala hopes that the card also might be used as a discount card for local businesses, to encourage city dwellers to stay within the city to spend money.

The group is currently in talks with a company called Data Card, which would issue the card.

Minneapolis wouldn’t be the first city to pass municipal ID laws.  New Haven, CT, and San Francisco, California currently have City ID cards.  Oakland, CA has passed laws in favor of municipal IDs, but have not yet issued them.  Princeton, NJ and Trenton, NJ also have similar community ID cards.  There are also currently campaigns in Chicago, Marin County, and Richmond, CA to enact similar plans.

So far, the campaign has won support from Chief of Police Tim Dolan and City Council Members Cam Gordon, Kevin Reich, and Don Samuels, who have all signed a petition endorsing the municipal ID concept.  Organizers in the campaign, who come from organizations such as Jewish Community Action, Family and Children’s Service, Pillsbury United Communities Waite House, and the Minnesota Immigrant Rights Action Committee, have been hard at work gaining support from local businesses, city officials, nonprofits, and churches.