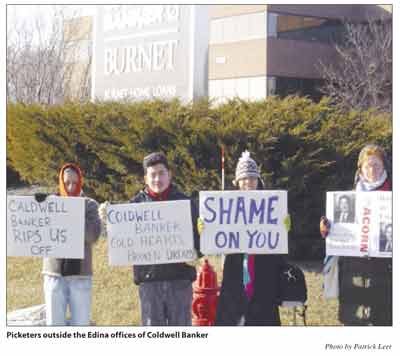 “[I want to know] how they can be made to pay for what they have done to me and my family and why aren’t these people being sent to jail,” said Ignacio Garcia in an interview with the Spokesman-Recorder last week. Garcia was speaking about the fight his and a number of other families are waging against what they allege is housing discrimination on the part of Coldwell Banker Burnet Realty Company.

“We wanted to buy a house for our children,” said Garcia. “[Real estate agent] Johnny Recalde said to us that ‘Every person who leaves my office leaves with keys and a piece of the American dream.’”

However, from what community organizer Alexa Milton describes, for too many families who dealt with Recalde, the experience was more like an American nightmare. “We found out about the issue from Ignacio,” said Milton, who is an organizer with the Association of Community Organizations for Reform Now (ACORN). Many of the affected families are working with ACORN to fight for justice.

Milton explained that “We got out a leaflet and began to talk with people and saw that this is a more widespread problem than we thought at first. We discovered problems such as the agent not providing translated documents for non-English speakers and telling people that they did not need inspectors, and taking money for inspectors and not providing services. Many of the houses also had problems with lead based paint and sinking foundations.”

Garcia explained that all of these problems existed with the home he and his wife purchased. “He [Recalde] showed me three houses and said that these were the only ones I qualified for,” explained Garcia. “I asked Recalde if this house was worth the price and Recalde said, ‘Yes.’”

Garcia told us he put down $1,000 good faith money, and that Recalde had him sign a lot of papers that he did not explain to him. When he asked Recalde if he should be offering less money for the house, he said Recalde got “insulted and said that the house was worth more money.”

Garcia said that he asked the seller to make some repairs, and that Recalde told him that the seller was “a little old man who could not make any repairs to the property.”

Once the agreement was completed, said Garcia, he found out that he had bought a house that really should have been condemned. He found out that the furnace did not work, the drain system was badly broken, and that the person who actually sold him the house was not in fact “a little old man” but a young man who had just recently bought the house and “flipped” it over to him without making any of the needed repairs.

Garcia and his wife went through a series of legal struggles with the courts and attorneys and tried to get help from other community organizations in their quest for justice. They finally connected with ACORN, found other families who shared the same kind of experience, and began to organize their fight collectively with other people. About 20 families have been meeting regularly to strategize; most of those affected are Spanish-speaking immigrants.

The families got together, shared information, and decided to organize a campaign to win justice for themselves and others similarly deceived. About 50 people braved frigid weather on a picket line last week in front of the Edina offices of Coldwell Banker to protest the housing discrimination and scams that they accuse the company of perpetrating. They issued a letter to Coldwell Banker executives which included their demands.

“Our demands are for the affected families to be fully compensated. We want the agent fired, and we want Coldwell Banker to work with us to develop ways to prevent abuse in the future,” said Milton.

Coldwell Banker denies charges
Coldwell Banker would not respond to our request for a telephone interview but denied all of the group’s charges in a statement issued to the Spokesman-Recorder last week by Coldwell Banker Burnet president Robin Peterson.

“Members of an organization called ACORN picketed our Edina Regional and Corporate offices. ACORN is claiming that Coldwell Banker Burnet has failed to address customer complaints about one of our agents,” said Peterson in the statement.

“That is not the case. We met in a group with ACORN and the customers, reviewed their claims, and followed up with them by mail. To date, we have found nothing to support their claims against this agent. Coldwell Banker Burnet is committed to providing excellent service to our customers and we are always willing to meet with individual customers on any issue regarding their housing transaction. In fact, we have already offered to meet individually with any of the customers referred to by ACORN. Coldwell Banker Burnet adheres to and holds our agents to the highest standards.”

Both Garcia and Milton explained why they found Peterson’s response unacceptable: “We discussed this invitation to deal individually with Coldwell Banker in the group and decided not to accept it,” said Garcia. Garcia explained that the group voted against it because it put everyone in the same disadvantaged position vis-à-vis the company which they believe caused the problems in the first place.

One of the biggest factors affecting homeowners in the black community is the high rates of interest black people are forced to pay for loans, says Roger Banks of the Council on Black Minnesotans. “One of the principle reasons why our foreclosure rates are high is because the interest rates are high,” said Banks in an interview with the Spokesman-Recorder.

Banks and loan companies claim that they need to charge black people and other people of color more money for interest because many blacks have bad credit, and they are taking a higher risk in making a loan. Banks disputes this: “They oftentimes are not taking any risk at all. They make thousands of dollars, and [if the property is foreclosed on] they get the property back.”

“They have all of these secret methods of determining credit,” said Myron Orfield of the Institute on Race and Poverty at the University of Minnesota. They have “developed even more complex systems of discrimination against Blacks and Latinos.”

Orfield also said of the political economy of housing discrimination, “Discrimination has always been reasonably profitable.”

Garcia says that it was definitely profitable in his case. His house was foreclosed on, forcing him, his wife and two children into homelessness — not, however, before he spent thousands of dollars trying to keep and maintain the dwelling. “I put over $30,000 into the house, plus payments and my own labor, and they put us into the streets.”

Garcia vows to continue the fight; for him this is just the beginning of the struggle. In addition to the collective efforts he is making with other affected families, he has also filed a discrimination complaint with the State Human Rights Department. “We’re already destroyed,” he said. “What we want now is justice!”