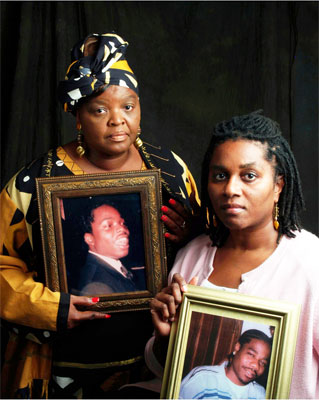 Mary Johnson, left, and T.L. Hartfiel — with pictures of their sons.

An unlikely, groundbreaking collaboration is brewing in the Twin Cities that allows for a new movement of healing in the face of destruction and devastation. The Two Mothers ministry is uniting and healing mothers of murdered children and mothers of offenders who have murdered.

Two Mothers is a ministry of From Death to Life, an initiative started by Mary Johnson to ”empower all women to come to terms with the impact of murder through emotional, spiritual, mental and physical healing.” Johnson’s only son was murdered in 1993.

Johnson is joined by T.L. Hartfiel, whose son committed murder in 2004 and was sentenced to 25 1/2 years in prison. Both mothers are now serving life sentences of grief and loss. Both have now come together to form Two Mothers.

The name, said Johnson, came from a poem she read relating the pride and compassion mothers share for their children. In it, the mothers ask the name of the other’s son. One says Jesus, the other, Judas.

”I knew then that I wanted mothers of murdered children and mothers of offenders to come together and heal together. From that day forward, I prayed for a mother of an offender to come forward.”

Soon after, Hartfiel did come forward. ”Upon learning that my son had taken the life of [another] young man, I felt as though I had been told that my son had been killed,” she said. But she knew of no support systems to turn to. So, in her first meeting with the public defender’s office, she sought out support groups for mothers of offenders. She was given Johnson’s number.

”I thought, ‘Why would she want to talk to me?”’ said Hartfiel. ”She is the mother of a victim, and I am a mother of an offender.”

”I thank God that she was willing to listen and understand. Now, God has led me to work with her helping both sides heal,” said Hartfiel. ”I am, in a sense, the other mother. Yes, my son may be still here on this earth, but the loss is still so powerfully felt.”

Johnson first started this movement of healing after her son’s death as a way for her to start living and breathing again.

”We can’t conquer anything that we won’t confront,” she said. ”I keep fighting because I can hear my child saying, ‘You go on, Momma.’ My child doesn’t want me sitting down here all depressed where I can’t do anything, can’t go anywhere. He would want me to keep on fighting. He would want me to come from death to life.”

Johnson began to translate that same healing and caring to offenders after preparing to meet the young man who murdered her son. She participated in restorative justice circles in Shakopee prison, where she met five offenders who committed murder.

”Meeting with those offenders, that’s when my heart changed,” she said. ”I began to see that offenders were human beings. They are not the animals I thought they were—they deserve another chance.”

That call also led Johnson to start a prayer walk and support groups for mothers. The first walk started three years ago. Johnson said it was very small, but powerful. Now in its fourth year, the walk has since partnered with MAD DADS, received a proclamation from Minneapolis Mayor R.T. Rybak, and evolved into a celebration calling for communal change. The focus, however, is still on the power of prayer.

”We as mothers are sick and tired of hearing about another child dying to violence or going to prison. It’s time to take back our community. I know prayer brings about change. So, we stop at each corner. We pray. We reclaim our community.”

That same reclamation is being put forth in the Two Mothers’ support groups for mothers of murdered children and for mothers of offenders that begin this month. The groups will meet individually at first and then move into one larger group.

”It’s very important to me for each mother to open up and tell their stories,” Johnson said. ”Talking about their situations is the beginning of the healing. I want them to have hope. If we don’t have hope, we don’t have anything.”

The Mothers Prayer Walk takes place June 10, 11 a.m., beginning at Farview Park at 621 29th Avenue North. Two Mothers’ first support groups will be held June 21 for mothers of murdered children and June 28 for mothers of offenders. Both meetings start at 5 pm and will be held at BIHA Women in Action Center, 1830 James Avenue North. For more information, contact Mary Johnson at 612-501-3512 or at twomothers@hotmail.com.