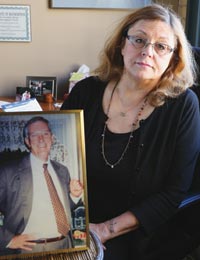 Suzann Eisenberg Murray with a photo of her late husband, Tom Murray

When Suzann Eisenberg Murray went downstairs in her new St. Paul hi-rise home for a social event several years ago, her intent was to take half an hour for a glass of wine, then return to some nonprofit work in her apartment. Instead, she was introduced to a table full of neighbors. One of them-Tom Murray-asked her to dance.

A full evening of dancing followed. By the time the musicians were packing up, Tom had decided that someday he would marry Suzann. And he was right. “It was just meant to be,” Eisenberg Murray said.

After they married, they continued to twirl spontaneously together in their kitchen. Eisenberg Murray’s eyes shine when she talks about Tom’s sense of humor, his gentle soul. Nine years after the wedding, Eisenberg Murray canceled a breakfast meeting with her business partner so she could make breakfast for Tom. He wasn’t feeling well, recovering from a cold. She delivered him oatmeal with raisins, toast with homemade jam, on a tray that he dubbed the “I Love You” tray. He said, as he always did, that she was beautiful. Then he reached his arms out to her for a kiss, and she went off to work.

When Eisenberg Murray got home, the house was dark, and she heard running water. She found her husband unconscious on the floor after suffering a stroke.

The ambulance took him to the hospital, he was intubated, his clothes trimmed off in pieces on the floor. “It looked like a TV drama,” she said. She held his foot while the staff tended to him.

A day after their oatmeal breakfast, Eisenberg Murray was talking to hospital staff, who suggested that she might want to have them remove Tom’s life support.

Her eyes spilled over with tears, “I can never talk about it without crying. It’s a horrible decision to have to make.” After numerous consultations, she agreed that removing the ventilator was the right thing for Tom.

Three days after their breakfast-on November 14, 2004-Tom was gone.

Birth of something new

What helped Eisenberg Murray the most in coping with her loss was when two women she knew professionally reached out. They were widows, and invited her to lunch. Eventually, it became a monthly “40-napkin” lunch, and from that, The Grief Project was born.

Eisenberg Murray knew there was a need for the kind of companionship she longed for after Tom’s death. In 2005, she started an organization whose mission is “To companion the bereaved as they discover new life after loss and to share our common journey.”

The Grief Project’s focus is on supporting those who have lost a life partner. Members currently range from ages 23 to 60+ and tend to be female, although Eisenberg Murray is actively encouraging men to join the community.

It’s not about “fixing” the pain

The Grief Project enables men and women to “find their tribe,” to learn that they are “normal crazy” in their mourning, to offer a “glimmer of light at our darkest time.” They talk about the traumatic milestones: what to do with the clothes in the closet, the shoes, the wedding ring.

“We are not trained counselors,” she said. “We are regular people who lost our loved ones and had our hearts ripped out. I’m never so bold as to say, ‘I know just how you feel.’ But I can tell my story, and I can listen.

“You can’t go around your grief. You can’t crawl under it. You can’t jump over it. You can only go through it. Having others with you to walk through it lightens the burden. The pain is still the pain, but you’re not as isolated,” she said.

Eisenberg Murray takes pride in the outpouring of welcome that members of The Grief Project extend to others. “Holding out the hand of friendship in the midst of our pain, that’s the real definition of humanity, of being on the planet together,” she said.

What it is to survive

For Eisenberg Murray, survival is about transformation. “When the casseroles are in the freezer, and the kids are back on the planes going home, and you walk back into a quiet house, it changes you forever. I’m a totally different person than the one who walked out of the hospital on the morning of November 14. And, in some ways, I’m a better person. My own grief journey has helped me see what is important, and what isn’t.” What matters, she said, is to “pay attention to the people you love.”

In being able to talk out loud-about her joy, and her grief-Eisenberg Murray can experience, again and again, how grateful she is for the time she and Tom had together.