Minneapolis is known for its bike-friendliness, but some think the Dinkytown area could take it to the next level.

MN Daily Editor’s Note: A new bike path for the Dinkytown area will open this summer.

Construction will begin this May on a bikeway along the Granary Corridor, a gravelly swath of railroad that runs below Dinkytown. The new path will connect the Mississippi River to TCF Bank Stadium, but University of Minnesota and city officials are hoping for a lusher, more developed greenway to eventually fill the strip.

Minneapolis Public Works studied development options for the old railroad tracks last year after the University expressed interest in building a road there, said Ignacio San Martin, director of the Metropolitan Design Center, which helped with the study.

“Doing so was going to cost an enormous amount of money,” said San Martin, who is also a professor at the University. “I said, ‘give me half of that, and we can do a greenway corridor.’”

The idea for a greenway beneath Dinkytown came from students in San Martin’s graduate urban design course. The project eventually made it into an area plan San Martin created with the University District Alliance.

“It’s one of those projects that’s in front of you all the time — you know we cross the river, we cross the bridge,” he said. “It looks like someone would like to say ‘We should do something with this.’”

The greenway would bring business, housing, entertainment and a farmer’s market into the trench, alongside a bike path and potentially a trolley route, San Martin said.

“A lot of people out there would be more encouraged to bike … if they had safer, more protected bikeways,” he said.

“Now that the economy’s getting stronger, there’s even more apartments and buildings being built,” he said. “It’s really the kind of thing where if you build it, they will come.”

“I think it’s great the bike path’s going in there,” he said. “I think we could leverage more out of that.”

With the recent apartment boom around campus, a greenway could fit in well, Gordon said.

“You could have some of the new housing right along it,” he said. “It would also, I think, really encourage people … to not need cars, and the connection would be so fast to get downtown.”

Most of the Granary Corridor is owned by BNSF Railway. Funding and ownership issues are two major obstacles facing the potential greenway, Gordon said.

“These projects can get delayed and slowed down for years and years because [the railroads] see it as an investment there they want to hold onto,” he said.

San Martin also expressed the need to partner with BNSF.

“We are trying to see how we can put a team to start talking with the rail line and say ‘Listen, there’s a tremendous opportunity here,’” he said.

“Other cities are going to overtake us because they’re making key investments in protected bikeways and greenways,” he said.

A greenway is currently in the works for north Minneapolis, where a “linear park” design, which would eliminate car traffic and replace it with a trail and green space, is being floated by the city.

The Granary bikeway through campus is scheduled to open mid-summer. 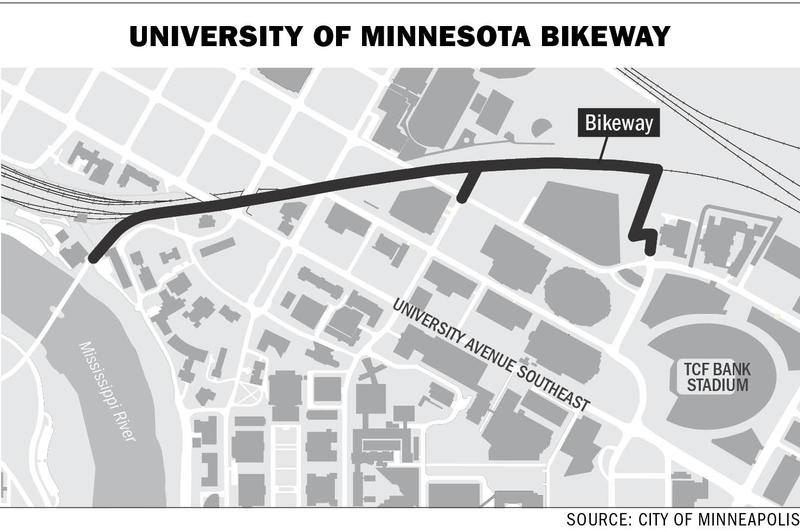