The Greenway could not be so highly regarded without the help and support of donors and members. As the organization that fought to get the Greenway built and continues to dedicate itself to maintaining and protecting it, the Midtown Greenway Coalition has many programs that help keep it safe, beautiful, and lively. A donation goes towards programs like Trail Watch, public arts committees, and improvement initiatives that help the path and the community thrive.

Keeping the Greenway safe is a dedicated group of volunteers known as Trail Watch, a nightly bike-mounted safety patrol. Trail Watchers act as extra eyes and ears for law enforcement by observing and reporting suspicious behavior or unsafe conditions. 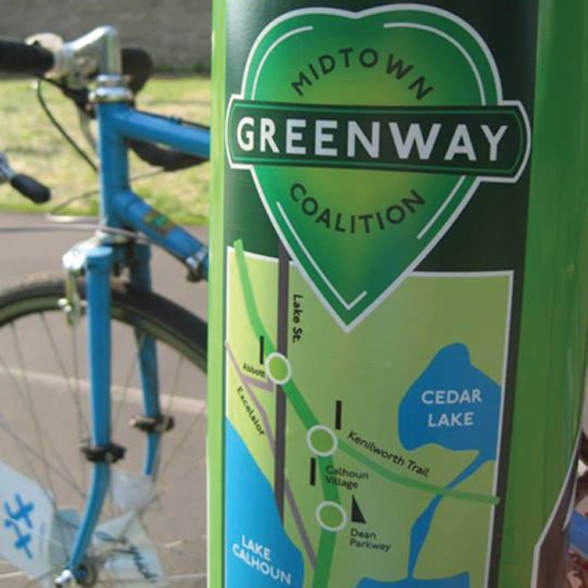 To keep the Greenway beautiful, we envision a clean, green, urban pathway that is safe and inviting for everyone. From Arbor Day tree planting to the Adopt-a-Greenway programs, we have been working hard to keep the environment lively and vibrant. Our Green Space Committee develops and implements a plan for maintaining, enhancing, and increasing green spaces and gardens in the Midtown Greenway.

The Midtown Greenway Coalition also advocates for public art along the Greenway to promote local artists. Public art in the Greenway provides an essential role in increasing community awareness and involvement with the corridor; increasing value for adjacent property development; and in articulating the history, meaning and local character of the Greenway as a Minneapolis resource.

The Improvements Committee is dedicated to focusing on issues regarding land-use, transportation, and safety issues in the Greenway. It encompasses everything from new apartment projects to improved trail crossings, from installing new ramps and bridges to adding amenities like benches and picnic tables. Improvements also include enhancing transit in the corridor, from maintaining the bike/walk trail to working on getting a streetcar in the Greenway.

We also focus on land-use issues that may harm the Greenway, such as the high-voltage power lines that were proposed for the corridor. We took the lead in organizing citizens and neighborhoods to oppose the lines in the Greenway — and we were thrilled when we won! The lines are now being buried under 28th street, instead of being strung up overhead in the Greenway.

The Midtown Greenway Coalition is excited about the Greenway being named the no. #1 bike path in America. We are dedicated to preserving the title and working hard to enhance our beloved trail. We could not have captured such a title without our donors and members. Become a member today and help with our mission to protect the Greenway. Visit http://bit.ly/1e6pUGv to support the cause and keep the Greenway the best in the country!