This summer, an intergenerational, cross-cultural gardening program brought youth from around Minneapolis and elders from the Korean Service Center (KSC) together in a gardening program aimed to beautify the Cedar Riverside Neighborhood.

The high school students, who named themselves “The Green Splash,” were hired through Minneapolis’s Step-Up program , a summer job program for Minneapolis Youth ages 14-21.  Based at the Brian Coyle Center (BCC) , the students planted flowers outside of businesses alongside Cedar Avenue, and worked on their main garden next to the Cedar Cultural Center, in addition to helping out with the Peace Garden, run by the KSC.

“We wanted to get the kids out into the community to green the neighborhood,” said Jennifer Blevins, BCC’s director. “We wanted to improve appearances on Cedar Avenue.”

One of the unique experiences for the kids was the opportunity to help out the elders from KSC in the Peace Garden, located just north of 94 on Cedar Avenue.

The Peace Garden was started nearly 20 years ago by a group of Korean residents living in public housing in the neighborhood, according to Kwangja Kwon, from KSC.  “In the beginning, they just planted on the property lawn,” said Kwon.  She said the manager complained, but eventually “gave up.”  The gardeners eventually got a plot of land of their own, and it was named the Peace Garden, but in 2001 it had to be moved to make way for a Hiawatha Avenue Light Rail station.  Its current location off Cedar Avenue provides gardening opportunities for 43 people, 80 percent of whom are elderly, said Kwon.

One of the elder gardeners, 78-year-old Taeduk Jeong, moved to the public housing in Cedar Riverside in 2007 because he heard there was a community garden there.  As a child growing up in Korea, he had worked on his family’s farm up until he joined the army when he was a young man.  Jeong, who spoke through a translator, said that if he didn’t have the Peace garden to work in, he would stay in his apartment, isolated and depressed.  Because he has diabetes, the garden gives him exercise to help maintain his health.  He calls the garden his “baby,” and he loves to go and see the plants growing, and feel the “joy of life.”  Jeong plants peppers, eggplants, cucumbers, and lettuce in his little plot of land, and with the fruits of the garden, his wife, Boksun, makes delicious meals for the two of them.

Jeong said that he appreciated the youth from the Step-Up program because they helped carry mulch and dirt that are too heavy for him to carry.  He said that he felt that the garden always gives him a strong sense of community with the other elders, and it was wonderful to have the youth share in that as well. 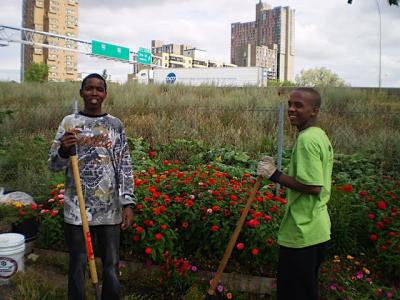 Another elder, Young Oh, has a plot in the Peace Garden, and has also worked alongside the youth workers in gardens around the BCC and at Bedlam Theatre as well.  Before the Step-Up program started, Oh had gotten into a little bit of trouble for planting an illegal garden off the East Bank ramp off of 35W.  Concerned for Oh’s safety, the police closed off the garden, but then the BCC allowed her to have her own garden on the center’s grounds, which the youth helped her dig up and maintain.  Grateful to have been given the space to pursue her passion, Oh has returned the favor by cooking Korean meals for the youth workers on a regular basis, which she served to them picnic-style by the garden. 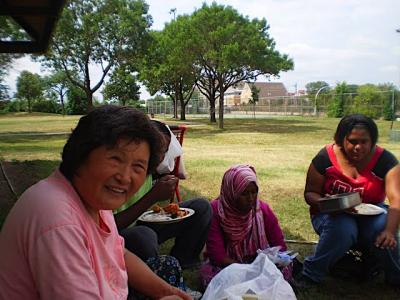 Through funding from the Cedar Riverside Neighborhood Revitalization Program (NRP), Brian Coyle was able to hire Jim Bueche, from the Bedlam, to supervise the youth.   Bueche said he had been having conversations with Jennifer Blevins from the BCC, and they both wanted to do “greeny stuff.”   According to Bueche, the summer gardening program was so successful because so many organizations were involved and wanted to be a part of the project.  “We got mulch donated from the Forestry Department,” said Bueche, “and fresh compost from the Community Gardens.”  The program also received wholesale plants donated from Minnesota Green, a program of the Minnesota State Horticultural Society.

While Bueche said that the business partners who let the Step-Up kids plant in front of their stores made great partners, because they can be relied upon to water throughout the year, he said the best partners were the elders from the KSC, because “they hold a whole different level of maintenance,” as they tend to the flowers and vegetables with utmost care.