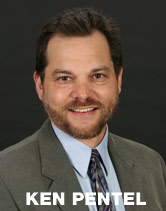 Four years ago it was a major political party because Ralph Nader had garnered more than 5 percent of the popular vote in Minnesota in his bid for president as a Green Party candidate. The Green Party State Convention in St. Cloud attracted hundreds. There were more than 80 candidates for local office as well as a complete slate of candidates for state constitutional offices. This year it is not a major party since no candidate running statewide received more than 5 percent of the vote in the last four years. That means there will be no public money to support candidates. It means Greens will not be included automatically in debates and forums. The state convention attracted only 87 delegates. There are about 15 local Greens running for office, and they could field only three candidates for the five major statewide offices this year.

Ken Pentel is running for governor again. Four years ago he got 2.25 percent of the vote. A curious phenomenon occurred in that election. The Green percentages of the vote actually increased as voters moved down the ballot. The candidate for U. S. Senate got less than 1 percent. Ken got 2.25 percent. The candidates for secretary of state and attorney general got bigger percentages, and Dave Berger, running for state auditor, got 3.6 percent. It has to be remembered Paul Wellstone died just days before the 2002 election, and the Senate race was close. Mondale lost to Coleman by a small margin. The DFL’s Roger Moe lost the governor’s race to Tim Pawlenty, but that was probably more the fault of Tim Penny’s Independent Party candidacy than Ken Pentel’s Green Party challenge. It is safe to conclude, however, that as voters moved down the ballot they felt more comfortable voting for a Green for a minor office than they did for senator or governor.

This year in the race for governor the electorate will again be split between a Republican (Tim Pawlenty), a DFLer (probably Becky Lourey or Mike Hatch), a Libertarian (Sue Jeffers, who challenged Pawlenty for the Republican Party endorsement) and an Independent (Peter Hutchinson). It’s very hard at this point to predict how any of that will shake out. Generally, in that wide a field the odds favor the incumbent, but Pawlenty will be carrying some interesting baggage. He ran on a pledge of no new taxes, yet he got the Legislature to pass a billion-dollar giveaway to multi-billionaire Carl Pohlad for the Twins’ stadium in the form of a sales tax for Hennepin County that (unlike any other sales or property tax increase) was not subject to the voters’ approval. He raised a tax and (contrary to state law) he wouldn’t let the people affected vote on it. Earlier he raised the tax on cigarettes by calling it a health fee, which fooled no one and infuriated many.

In any case, Ken Pentel probably won’t play the same role this time that he did in 2002 or 1998. Many think his greatest moment came at a time he wasn’t even present. In a three-way debate in 1998 between Skip Humphrey, Norm Coleman and Jesse Ventura, when the moderator asked the candidates whom they would vote for if they couldn’t vote for themselves. Humphrey said he’d vote for Coleman, and Coleman said he’d vote for Humphrey. Ventura said he’d vote for Ken Pentel.

Pentel will still be blamed by DFLers for being a spoiler in this campaign. No one can forget that Gore lost Florida in 2000 by a whisker and Nader got more than 100,000 votes in Florida. The fallacy of that argument is the assumption that if Nader weren’t on the ticket all those votes would have gone to Gore. In the same way, many people assume all Pentel’s votes would go to the DFL candidate. It is more likely that many of Pentel’s or Nader’s voters would not have come to the polls if the choice was simply between a Democrat and a Republican. Further, many analysts argue that once those voters came to the polls they were more likely to vote for progressive candidates on the rest of the ticket, and that generally favored Democrats.

Still, there are some voters that will want to vote for what they believe is the most progressive candidate. I asked Pentel what he would do if the race were between Lourey and Pawlenty, if it was a tie and he had the chance to vote for Lourey or for himself (thereby throwing the race to Pawlenty). He said he’d vote for himself, “and let the chips fall where they may.”

He recognizes that Becky Lourey has many good qualities and that she’s way better than Tim Pawlenty, but she is still part of the Democratic Party that supported the stadium and the regressive sales tax. The Democratic Party has supported extending the storage of nuclear fuels at Prairie Island and has done nothing to stop the spread of genetically engineered crops throughout the state. In the end Becky Lourey will be the captive of her party, he said.

That is not the opinion of all Green Party members. There was a sizeable minority that did not want to endorse a candidate for governor against Lourey, and Elizabeth Dickinson, recent Green Party candidate for mayor in St. Paul who came close to outpolling the incumbent, Randy Kelly, is a staff member in the Lourey campaign.

Attempts to reach Michael Cavlan for this article were unsuccessful. From previous discussions with the candidate it can be assumed he is also a member of the “Let the chips fall where they may” school.

The Senate race is quite different from the race for governor. Ford Bell is challenging Amy Klobuchar for the DFL nomination. He recently decided he would not challenge her for the endorsement at the State DFL Convention. It was widely assumed that in that contest Klobuchar would get the endorsement on the first ballot. Bell has been an articulate supporter of “Bring the Troops Home Now!” and Single Payer Health Care. Klobuchar says she supports a quick end to the Iraq war and universal health care and that her differences with Bell are simply “nuances.” Bell, peace activists and advocates of Single Payer disagree. Simply ending much of the military engagement in Iraq doesn’t mean the U. S. would withdraw from its many bases there. It doesn’ t mean it would end fighting the war by proxy, and it doesn’t mean the U. S. would stop interfering in the internal affairs of that country. Also, supporting universal health care can mean supporting the insurance companies and the HMO’s continued profit-taking in the health industry. Single Payer would eliminate the insurance companies and, thereby, slash health care costs by 20 percent.

Bell says he would withdraw from the race if Klobuchar would unequivocally support those positions. Klobuchar prefers to try to drive down the middle of the road. But it seems like Klobuchar, Bell and Cavlan are playing a dangerous game of chicken. In the 1950s teenage boys would drive cars at each other at high speeds hoping the other driver would “chicken out” and swerve out of the way. Sometimes there were no survivors. That could be the scenario this fall, as progressives and mainstream DFLers crash and burn and the public turns to Mark Kennedy and the Republican Party’s continued march toward fascism with its constant erosion of our civil liberties and total and permanent war.

Amy Klobuchar has to understand that an immediate end to the war in Iraq and Single Payer Health Care are the two most important issues Paul Wellstone stood for before he died four years ago. They are the Wellstone minimal demands for a U.S. senator. They are the measure by which a candidate will be judged. She has to acknowledge Wellstone’s legacy and agree to carry it forward. If she does that she will energize her base, unite her party and get elected. If she continues to try to play it safe by avoiding controversy, then she will turn off her base, alienate her left and lose the election.

It is within her power to stop this game of chicken. She needs to sit down with peace activists and advocates of Single Payer and work out a Wellstone program that she can take to the campaign trail. She needs them in a caravan behind her. She can’t run over them and then expect them to join her parade.

Certainly the most surprising, and maybe the most promising, endorsement to come out of the Duluth Green Party Convention was the endorsement of Papa John Kolstad for attorney general. [In the interests of complete disclosure, I listened to Papa John in the ’60s when he sang folk songs in coffeehouses, and I have danced to his hot jazz very recently. I am a fan and under his thrall.] Kolstad is not an attorney. You don’t have to be to run. Although it is unusual, non-attorneys have been elected to the post of attorney general for the State of Minnesota. In what John called “musing between friends,” he talked about the race and his qualifications.

“I have a lot of legal experience, and, as long as I don’t have to use it, I should be OK.” He explained that he was referring to Tim Pawlenty’s $6,000-a-month job as legal counsel for a firm lobbying the state when he was a member of the Legislature. Some observers have alleged the job was a kickback for favorable legislation because Pawlenty never had to even issue a legal opinion let alone litigate. Pawlenty has denied those charges.

Kolstad has done much of the legal work for his company, Mill City Records, and he is quite knowledgeable in the area of copywright law, particularly as it pertains to music. He sees the job of attorney general as managing an office, similar to the work he’s done running his business for the past 26 years, and directing litigation.

He speaks very favorably about Mike Hatch’s work as a watchdog on the spending habits of the health care executives. He would continue that work. He’s also concerned about large handouts to big developers. For instance, he says, former Minneapolis City Council Member Steve Minn got $32 million from the city to build the Stone Arch Apartments. The cost to build the apartments was only $24 million, and, today, the tax assessor says the property is only worth $19 million for tax purposes. Michael Lander, another developer, who built the housing and shops on the corner of Lake Street and the River Road, got $11.4 million in public money, and, today, the property is assessed for $1.6 million. Kolstad believes there’s something wrong here. “It may be legal, but it’ s not right. We should look into it,” he said.

There are three major reasons why Kolstad is running:

First, Becky Lourey has said she would bring the National Guard troops home from Iraq. Kolstad would use the attorney general’s office to assist her in that cause.

Third, he would use the attorney general’s office to fight on behalf of the environment. If you are creating greenhouse gases by driving a gas guzzler, you should pay for it. He suspects collusion between coal companies and electric companies, and he’ d like to investigate that. How can electric companies charge rate-payers to pay farmers not to use wind turbines to generate safe, renewable energy? He’d like to look into that.

Matt Entenza, the generally progressive minority whip in the House, is the presumed DFL endorsee for attorney general, but Kolstad has some problems with his candidacy. First, Entenza’s wife is an executive with UnitedHealth Group, Inc., the company that just gave its chief executive $1.6 billion in stock options. Kolstad thinks there might be a conflict of interest here. And Kolstad is upset that Entenza promised to oppose the billion dollar giveaway to Carl Pohlad for the Twins Stadium, and he ended up voting for it.

Talk about the Green Party in our “Government forum”:https://www.tcdailyplanet.net/forum/66.