The 11-mile Green Line, which opened on June 14 between the downtowns of Minneapolis and St. Paul, was projected by Metro Transit to carry an average of 27,500 weekday riders by 2015. Yet already, average weekday ridership on the Green Line is more than 30,000 passengers – even before fall classes at the University of Minnesota have begun, presumably swelling the ranks of weekday riders.

“What we’ve seen is people who have never taken a train before coming out and exploring,” said Brian Lamb, general manager for Metro Transit. “They are finding all those great destinations on the Green Line, and great destinations are what makes light rail work.”

Besides more than 800 retail businesses located immediately along the Green Line, light rail passengers are discovering facets of the Twin Cities they may not have fully known before, such as the more than century-old legacy of Rondo, the historic center of St. Paul’s African-American population. To many, the Green Line has opened a gateway to learning about the Rondo community in ways unavailable to car riders on University Avenue or Interstate 94 over the past several decades.

The heritage – and demolition – of Rondo

The history of St. Paul’s Rondo neighborhood goes back to the years just after the Civil War, when African-Americans began settling on and around Rondo Avenue. By the 20th century, the area was home to thousands of residents who had opened businesses, established schools, founded churches and built a tightly knit community that was in many ways independent of the white community around it. Rondo was made up of generations of families who had lived in Minnesota for decades as well as newcomers from the South who came for new opportunities.

“There’s a really rich history of achievement in the Rondo area,” said Ramsey County Commissioner Toni Carter, whose father-in-law Melvin Carter grew up in Rondo, and, with his wife Billie, raised their family there. “The history of Rondo is not just about the people of this one area, but about Minnesota, U.S. and even world impact.”

Indeed, many of the Twin Cities African-American community’s current most prominent elders either grew up in or have significant family ties to Rondo. For example, former St. Paul NAACP head Nathaniel C. “Nick” Khaliq and Nieeta Presley, executive director of St. Paul’s Aurora/St. Anthony Neighborhood Development Corporation (ASANDC), were both born and raised in Rondo, until much of the neighborhood was demolished and some 650 families displaced as part of the construction of Interstate 94 in the early 1960s.

The Minnesota History Center describes the effect of the interstate construction on Rondo by saying, “(It) shattered this tight-knit community, displaced thousands of African-Americans into a racially segregated city and a discriminatory housing market, and erased a now-legendary neighborhood.” The experience left a lasting effect on Khaliq and Presley, who were children at the time.

“I lived at 304 Rondo Ave., but stayed with my grandparents, the Rev. George and Bertha Miller Davis, at 449 Rondo Ave., until I was about 12 or 13 years old, when they forced my grandparents out of their home,” Khaliq said. “I didn’t fully understand then what was going on, but I recall it was a very traumatic experience.”

Presley has similar recollections of growing up in Rondo in the 1950s.

“We lived on Rondo Avenue, and all of my family, including my aunts and uncles, all lived within a few blocks,” she said. “I believe I was about 10 or 11 years old when we had to relocate. We found new places to live, some still in the area, but it was never quite the same after that.”

When plans began to shape more than a decade ago proposing to build a new light rail line down the center of University Avenue in St. Paul, the project quickly stirred comparison to the construction of Interstate 94 and destruction of Rondo.

“We were very skeptical of the plans,” Khaliq said. Community concern arose out of initial plans, based on federal funding guidelines on construction costs, ridership and travel times, for the new light rail line to bypass some of the city’s most transit-dependent neighborhoods, including around Historic Rondo, with stations as far as a mile apart. But through a concerted effort led by groups such as the NAACP and ASANDC, federal authorities changed their guidelines to allow additional Green Line stops to be built, including at Western, Victoria and Hamline Avenues.

Today, these added Green Line stations in Historic Rondo have proven continuously busy – and a draw for visitors.

“I smile to myself when I see all of the faces and ages at the Victoria Station. There’s a lot of diversity – some in suits, some in shorts, some with babies, some senior citizens,” said Dr. Beverley Oliver Hawkins, longtime CEO of Model Cities, a nonprofit human service and community development organization that has been active on University for nearly 50 years.

Hawkins, whose office is just north of the Victoria Street Station, sees the station activity from her window. “I see it every day; many new faces coming here, some just out of curiosity,” she said. “Now, we just need to give people reasons to get off at these stations and visit our businesses.”

Hawkins is working hard to help achieve that goal. In 2015, Model Cities hopes to start construction on two sites near the Victoria Street Station – the Model Cities BROWNstone and Central Exchange projects would bring 60 new units of family and workforce housing as well as two new pocket parks, public art and a reading room that focuses on the role African-Americans played in St. Paul’s early railroad industry. The latter is personally poignant to Hawkins. 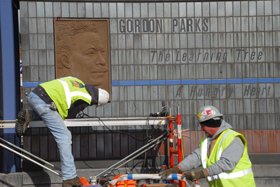 “My father’s parents came to St. Paul to work on the railroad, and settled in Rondo,” Hawkins explained. “I grew up in Kansas City, but as a child, I would take the train to St. Paul every summer, to see and stay with my extended family here.”

Left: Crews install a terra cotta panel with a likeness of Gordon Parks as part of the Victoria Street Station’s “Faces of Rondo” artwork.

“There’s something about light rail that draws people on to explore and learn more about other people, communities, and cultures.” said Carter, a strong advocate of light rail construction. She and her husband Melvin have already developed a routine of exploring the Green Line’s intercultural communities in the evenings and on weekends. “The train itself is a historical connector among people, bridging lives of those who remember and honor the Red Caps and other leaders who anchored the community in earlier times with newer residents and businesses along the Green Line, including Southeast Asian and African immigrants. People come to live, work and build together here in Rondo.”

A common thread in the thinking of community leaders such as Carter, Khaliq, Presley and Hawkins is the power of diversity. They believe the Green Line can help boost economic growth as well as create diverse and distinctive destinations that are both aesthetically pleasing and vital to the development and overall growth of the community.

“If you’re from the Twin Cities or from out of town, and want to come to a place that celebrates diversity and all the benefits it offers, you should come here,” said Hawkins.

Opportunities to learn of Rondo

Wanting to learn about Rondo?

A great place to start is by stopping at the Green Line’s Victoria Station. The station’s walls celebrate the past and present of Rondo through a series of terra cotta glazed portrait and narrative tiles featuring historic people and landmarks of the Rondo community. The 17 “Faces of Rondo” portraits, selected by community members, include such prominent figures as the late filmmaker Gordon Parks, former Minneapolis Mayor Sharon Sayles Belton, and Model Cities CEO Dr. Beverley Oliver Hawkins.

At the Model Cities office at 839 University Ave., visitors will also see plans for the new Model Cities Redevelopment (MCR) project, a mixed-use (retail and residential) development that planners believe will be a destination point for consumers, visitors and local residents. MCR’s public art and educational areas will blend historical elements of the African-American railroading experience.

The Aurora/St. Anthony Neighborhood Development Corporation (ASANDC) offers two immediate opportunities to learn about Rondo with “Voices of Rondo” – an oral history of Rondo, presented by residents and organizers in the Rondo neighborhood, and the “Points of Entry Players Program” provides, which youth with a direct opportunity to learn about and present written monologues about Rondo. For more information about these programs, contact the ASANDC at (651) 222-0399.