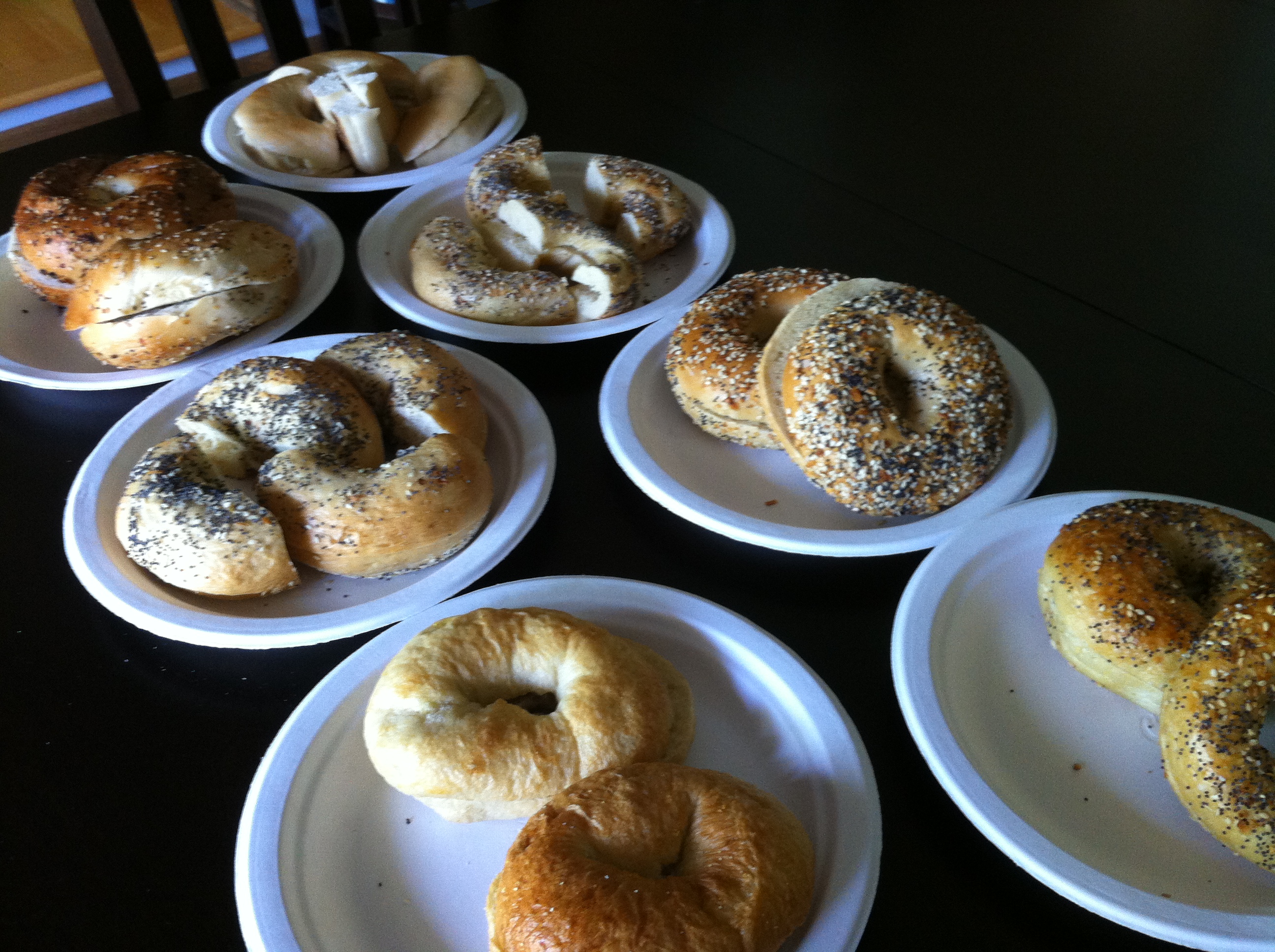 In the May 2012 issue of Consumer Reports magazine, there was a spread…er, schmear about bagels. No, not the handmade classic bagels I grew up with back East. This piece and the accompanying ratings included bagels from Dunkin Donuts, Costco, and the frozen section of the supermarket. Dunkin Donuts was rated the best bagel. Are you f****** kidding me? Maybe it’s the best bagel available at 3:00AM in Worcester, MA – but that’s about it.

I then selected 6 locally available bagels to compete with 1 from the bagel shop around the corner from my childhood home in Queens.

The reason I took so long to write this is simple – I’m still recovering from the shock of the results.

We used everything bagels when possible (because I personally deemed that the Jewiest of bagel varieties). When everything wasn’t available we went with plain.

When tasting the bagels, we threw out several criteria (in no particular order):

-size of the hole

-outside crustiness vs. inside chewiness

And here are the results:

#7. Starbucks – Advertised as New York-style and with a new and improved recipe. We thought they were generic dough circles without any flavor or distinction.

#6. Seven Stars Coffee House – Way too chewy for our testers and quite small in stature.

#5. Common Roots Cafe – Very dry and the worst in the seed adhesiveness category. Also noted for being slightly underbaked.

#4. Rye Deli – Also on the drier side and poor seed adhesiveness.

#3. New York City bagel shop – Doughy, but good outside crustiness ratio. The biggest of the bagels.

#2. St. Paul Bagelry – Points off for having an abnormally large hole. The best when topped with lox and cream cheese.

#1. Bruegger’s – It took me 45 minutes to type the ‘B.’ My two bagel “experts” rated this the best bagel in the Twin Cities. One of my “experts” called and texted me to proclaim his embarrassment. He also politely asked not to use his name for fear of hate mail.

I refuse to admit defeat (which should come as no shock to anyone who knows me), but this was not a scientific taste test. There were so many flaws that I don’t even know where to begin. So while my two “experts” completely destroyed my bagel theory, I still can’t figure out where to go from here. Are they so far removed from real bagels that their taste buds and senses betrayed them? Or are Bruegger’s mass-produced and oddly flavored bagels actually good?

Stay tuned as I try to infiltrate Bruegger’s to find out how these Twin Cities delights are made. If I succeed, there will be video. If I don’t, I’ll move on to #2.