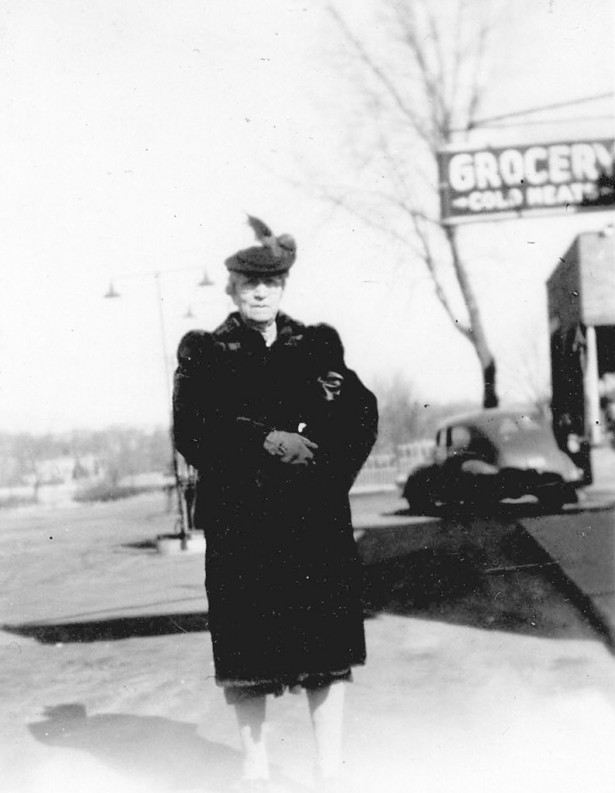 As coats made from the pelts of animals go, the one that I inherited three years ago probably wasn’t that expensive: It isn’t mink, beaver, sable, or even fox. Rather, it’s made from the pelts of brown rabbits, dyed black. We figure it came to my Austro-Hungarian great-grandma in the 1930s; family lore has it that Great-Uncle Ted presented it as a gift to his mother. Inside, embroidered in champagne-colored thread on small slips of satin that match the lining, are her initials: M. L., for Mary (Peck) Laber. But there is a bit of mystery associated with the coat-a photo shows Grandma Laber in a dark fur that’s a slightly different style from the one I inherited.

Knowing Grandma’s thrifty ways, we theorized that the coat had been remodeled. Why, though, if Uncle Ted had purchased it specifically for his mother, wouldn’t he have ordered the style she preferred? By the 1930s, Ted was flush from running booze down from Canada during Prohibition. He owned a tavern at 1730 Rice Street, and operated various games of chance. (He is said to have once swallowed the pull tabs when the law appeared-though he usually received ample warning of their impending visits.) Grandma managed the adjacent grocery store, and Ted’s brother ran the gas station next door. Surely, Ted could have afforded better than dyed rabbit in the wrong length!

While it’s fun to speculate about how and why Ted got the coat, I mostly like to imagine Grandma wearing it those many winters ago. She was a tough lady who had well earned that small luxury by the time she acquired it.

Widowed at thirty-seven with five young children, Grandma’s best resources were her gregarious personality and a self-reliance she learned early in life. Her family arrived in Saint Paul one cold April afternoon in 1888, when she was thirteen years old, along with sixty other immigrants from Andau, Austria (then Hungary). They were dumped on a Saint Paul sidewalk by their travel “expeditor.” Luckily, a German-speaking citizen came by and offered them sleeping space in an unfinished storefront. The next day, Mary saw the adults pick themselves up to seek housing and work-often at the North End rail yards, or as “domestics.” Much later, she too took work cleaning houses, after her husband, Joseph, a cigar roller, died at age thirty-eight.

Luckily, one of her clients owned a grocery store on Rice Street, and invited Grandma and her children to run his establishment and live in the quarters behind. As the family prospered, Grandma purchased land and an old farmhouse at Rice and Larpenteur, just outside the city limits. In 1937, Grandma and Ted built their own grocery store, as well as a bar, gas station, and living quarters. Today, Laber Liquors still stands at the corner of Larpenteur and Rice, but is no longer owned by the Laber family.

Grandma became well-known in the community, and was often called upon to give nursing advice when someone fell sick. Hopefully, by then she had the fur coat to wear when making those house calls. She likely wore it on days when she would take a little cash out of the grocery store till and board a streetcar for the two-hour trek to North Minneapolis to visit her sister. Another of her favorite haunts was Front Street. It took her grandchildren many years to figure out that Front Street was Calvary Cemetery, where her husband and parents were buried.

The coat undoubtedly kept Grandma warm when she went touring in the Model A owned by son Ted and daughter Martha, as well as in the yellow Stutz Bearcat owned by Ted’s pal Doc Schroeder. Later, Grandma would have worn it while riding in any of Martha’s succession of Packards.

Accessorized in the 1940s with leather gloves and a stylish velvet chapeau, the coat would have graced Grandma’s shoulders during Mass at St. Bernard’s Church in Saint Paul’s North End community (home to Austro-Hungarians and Bohemians), and to meetings at the St. Bernard’s Little Flower Mission Club, as well as visits to her extended family scattered throughout the North End.

You could say the coat really has come down in the world since those days-now riding sedately in my Taurus wagon, left to lie on top of a file cabinet during school hours. The coat may be old and unremarkable, but it’s still warm, and serves as a link to the past and to the vital woman who was my great-grandmother.