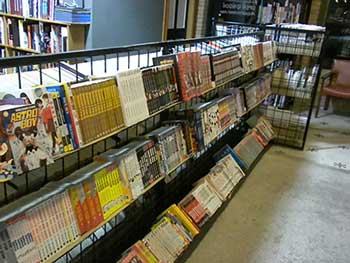 Big Brain Comics has a huge variety of graphic novels. The age of readers ranges from about 18- to 60-years-old, said owner Clarence Thurn. Thurn only sold comics at first, but today 30-35 percent of his stock is graphic novels, he said. Photo by Franny Alfano

The Hennepin County Library’s graphic novel section has grown so much that there is a plan to give graphic novels their own section at all 41 libraries in the county this year.

Graphic Novels are comics like books but the length of a novel.

The first widely known graphic novel was “Contract with God,” published in 1978.

Minneapolis Librarian Susan Brown said there are a number of signs that the popularity of graphic novels is growing. “We can see the growth in their use in libraries, the number of titles that publishers are selling, the growth of graphic novel sections in bookstores,” she said, and more, like the increase in movies made from graphic novels.

Airen Belleau, an avid teen reader of graphic novels, likes graphic novels because they are more fulfilling for her than typical books. “The stylized pictures are more personal,” she said. “I feel I can identify better with visual cues.”

The first graphic novel she read was in seventh grade, which was “Persepolis,” the story of a girl from a formerly communist and socialist family who is growing up during the Iranian revolution.

Clarence Thurn, owner of Big brain Comics, was 14 when he read his first comic book – “The Dark Knight Returns.” Graphic novels are a great escape from reality, he said.

Once just for comics, his store’s inventory is now 30-35 percent graphic novels, he said. Thurn credits “Watchmen” and “Maus: A survivor’s tale” as being two graphic novels that get people hooked on the genre. See sidebar for descriptions of the novels.

The New York Times recently put out a list of the top Graphic Novels of 2009. Some of them were: “The Wonderful Wizard of Oz,” “Fables,” “The Absolute Death,” “The Complete Essex County,” and many more.