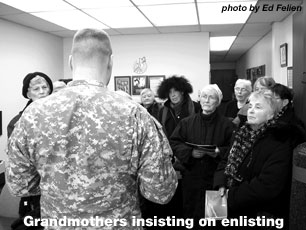 Local grandmothers attempted to enlist into the U.S. military on Tues. Dec. 6 at the Army Recruitment Center on Washington and Oak Street in Minnepolis. They demanded that the military stop recruiting their grandchildren and other women’s grandchildren to fight in what they consider to be an illegal and immoral war in Iraq.

A statement issued by organizers read: “We feel it is our duty to enlist in the U.S. military today in order to replace the grandchildren who have been deployed there far too long. By this action, we are not supporting the used of military force in Iraq—in fact, we are totally against it. But inasmuch as it exists, our goal in joining up is only to protect young people from further death and maiming.”

The statement concludes: “We grandmothers have all had the privilege of living long lives and are willing to put ourselves in harm’s way so that our own and other people’s grandchildren will have a chance to enjoy full lives as we have.” ||