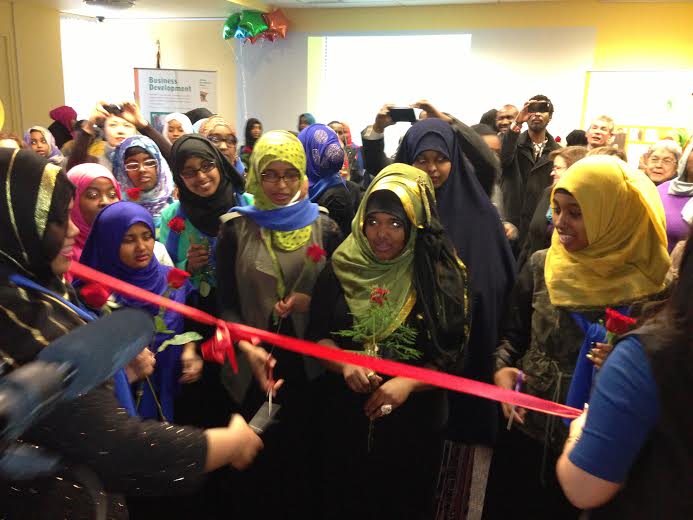 Colorful scarves, skirts, blouses, shoes and other clothing accessories adorn the inside of the tiny thrift store recently opened on the second floor of the African Development Center. The store is a dream made reality by young East African girls and their mentors in the Cedar-Riverside neighborhood of Minneapolis.

The grand opening of the Sisterhood Boutique drew a large crowd of students, community members and supporters, who filled the front room, lobby, and hallways of the African Development Center on the chilly evening of February 28. Buzzing with people, music and the smell of food catered from AfroDeli, the evening was an exciting celebration of sisterhood, community, social entrepreneurship, and youth empowerment.

“In the beginning it was just a bunch of us from the neighborhood, getting together, hanging out and talking about our problems. To see it [the boutique] come to life like this and have all this people supporting us is great. Especially for me this has been great because I am interested in studying business” said Samira Ali, one of the founders of the store.

The story of the boutique is the story of a project that began with a few East African girls in the neighborhood getting together at the Brian Coyle Center in Minneapolis. With the support of the then-director Jennifer Blevins, the girls began meeting weekly to discuss issues that were important to their lives. A lot of them shared similar experiences and having a space to talk about those experiences and bond with each other was cathartic.

“I can now say I have made real friendships, real sisterhood” said Zakariyat Adem, one of the young women involved in the project. Some of the girls were born and raised in Minnesota, while others, such as Samira Ali were born elsewhere and came to Minnesota when they were just babies.

The young women call themselves the Sisterhood of the Traveling Scarfs, a name inspired by a popular Hollywood movie. As most of them wear scarfs, they felt the name perfectly captured their bond and journey. The weekly meetings eventually led to the desire to create something concrete for young women in the neighborhood: a space and opportunity that support personal and professional growth. Specifically, they aimed to teach young women business skills such as retail, event planning, management, and customer service. The group has been meeting every Tuesday for the last year, with Laurine Chang facilitating the meetings.

“She was learning with us,” said Ali. “All of us came together and we were learning together. Personally, she made this a whole lot different, in a good way. We can always talk to her about our problems, and still be professional with her.”

At first, the boutique was merely an idea the young women threw around amongst themselves in their weekly gatherings. Ali explained it in this way, “It was just an idea floating around….and then Laurine came and started helping us. We started going on field trips, going to thrift stores and meeting people” One of these people was Mary True, who works in the Sabo Center for Citizenship and Learning at Augsburg College. True jumped right in and started searching for resources for the project. She also connected the group with several resources at Augsburg College, including graphic design and MBA students who helped write professional business plans for the project. Another student from Augsburg, Stella Richardson, was key to the project. Richardson helped co-found a thrift store, Express Yourself Clothing, when she was just a high school student. Her experiences as a thrift store co-founder were both inspiring and practically helpful in bringing the young women’s ideas to life.

A host of other individuals and institutions have helped the young women along the way including the Bryan Coyle Center and the Pillsbury United Communities. The project has also gotten a lot of support in terms of funding, receiving over $100,000 in grants, mostly from women’s groups and groups focused on youth social entrepreneurship initiatives. Its business plan calls for a gradual path to becoming self-sustaining after five years.

When asked about when the young women first knew their idea was coming into being, Ali said “When we started looking at places, Jennifer started having people from Augsburg come to us…We had Mary helping out and we started putting our ideas on papers. And at that point we realized it is really happening. We wanted it [the store] in the community, because it is for the community, by the community. We all live here.”

Those who have had the opportunity to work with the young women feel impressed by their commitment, hard work and dedication. “I’ve just been really been impressed by the level of commitment and their maturity. I mean they are teenage girls but they are so mature….they are interested in things, they don’t take anything for granted, they feel fortunate for all that they have” said Mary True, who has had the opportunity to work closely with the young women.

Speaking about the future of the project, Samira said it was: “To keep the process going. To help younger girls in the neighborhood who need help building resume, finding a job and just connecting with other girls and sharing that bond. Hopefully, it’s a never ending process that keeps going for many more years to come. We want other people to experience what we experienced in the process of opening the store.”

A group of the young women from the Sisterhood will work in the Boutique through an internship project they established. The internship will provide training in resumé development, how to successfully run a retail business, and customer service and will connect the young women with resources to further pursue their goals. At the grand opening, the president of Augsburg College announced a new scholarship for those involved in the internship. It looks like doors continue to open up for a group of young women who have worked really hard to bring to life their vision.