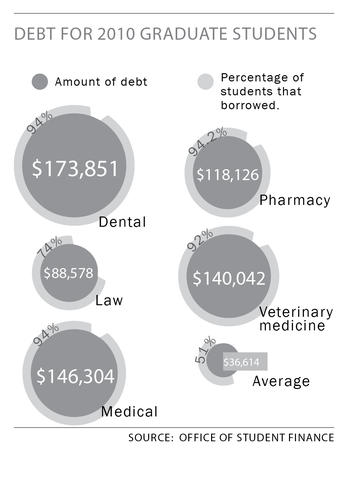 As tuition at the University of Minnesota continues to rise — the latest hike was approved last month — student concern seems to have plateaued.

“Tuition is always a problem” and debt is a given for graduate school, said Allison Johnston, a graduate student in the dental resident program this summer.

Most University graduate schools will see a 5 percent increase for in-state tuition for 2012, but some will hike prices even more. Tuition for the School of Dentistry and the Law School is set to increase by 7.4 and 9.3 percent, respectively.

“It all adds up,” said graduate student MerriAnne Werder.

Werder, in her first year in the biology graduate program, said debt is stressful but students just “learn to deal with it.”

Some students paying off loans after graduation have faced difficulties in deciding which job to choose or whether to have a family, said Matthew Reed, program director at the Project on Student Debt, an organization that works to educate about borrowing and its implications. For undergraduate students, the question of whether to go to graduate school is also a challenge that comes up, he said.

The average amount of debt was $36,614 for students who finished graduate school in 2010, and just more than half of students borrowed, said Kris Wright, director of the University’s Office of Student Finance.

For the same year, dentistry graduates had the highest average debt at $173,851. Ninety-four percent of those students took out loans.

“There’s not a sense of urgency about this issue,” said Graduate School and Professional Student Association President Abou Amara.

“Graduate students definitely understand we’re in a difficult time,” said Emily Combs, incoming president of the Council of Graduate Students. The views on debt vary between the different graduate schools at the University, she said.

Many students project an attitude of, “I’m already in [school] so I can’t worry about that now,” Zurkuhlen said of debt.

By graduation, the numbers are so overwhelming that it’s hard to grasp, said third-year dentistry student Jake Ihle. The amount of debt could mean retiring at a later age than he hopes, he said, or could also mean working extra hours.

Many students have side jobs at dentistry clinics around the University, which is something Johnston might consider pursuing to deal with the tuition increase, she said.