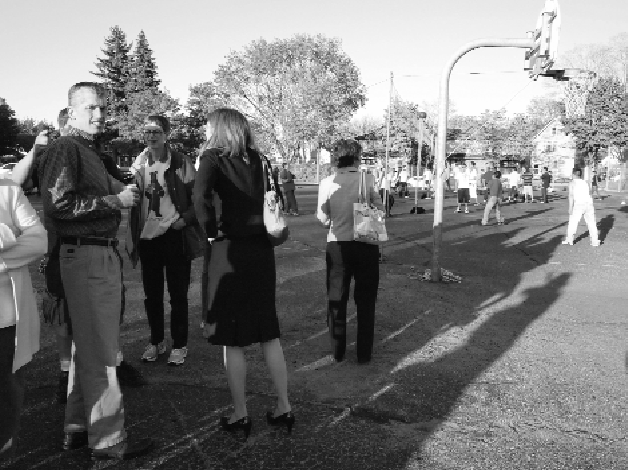 Pastor Craig Pederson, at left, and task force members toured the Grace Center grounds with water management consultants early this spring, while volleyball games went on in the parking lot south of the building. Below, students in the Planet Home School Cooperative talked about their experiences at a spring open house. The cooperative rents classroom space. (Photos by Margo Ashmore)

Little Kitchen Food Shelf use spiked in the last month or so, perhaps due to North Minneapolis tornado refugees.

The Kindest Cut, a spay-neuter service van, is coming July 22.

Consultants are trying to figure out better ways to landscape the grounds and deal with storm water.

Meanwhile, the congregation is hoping to worship in a renovated sanctuary “by Christmas,” but after missing an opportunity to coordinate with a school break, not sure that will happen.

All of the above, and more, are what’s up at Grace Center for Community Life, 1500 Sixth St. NE, the former Holland School building, where Northeast Community Lutheran Church (NECL), partners with tenants and could use one more. As a major tenant, a day care center could be ideal, said NECL Pastor Craig Pederson; or some other organization that would need a kitchen and be able to help with planned kitchen renovations.

Pederson wrote in the congregation’s e-newsletter, “This week [June 30] I have been reflecting on the process that led up to that historic day [the successful purchase closing]. It had been in the works for over a year and a half, yet even up until two weeks before the closing it was not entirely clear that it was going to happen!” He went on to say “the work of God’s kingdom is not always linear,” or clearly laid out.

Here’s what has come into place at Grace Center in a year, and what’s in process:

Fraser Academy occupies part of the building. Fraser Academy is a public K-5 elementary charter school, described on their website as “the national model of inclusive and tailored education for all children with an emphasis on individual attention.” 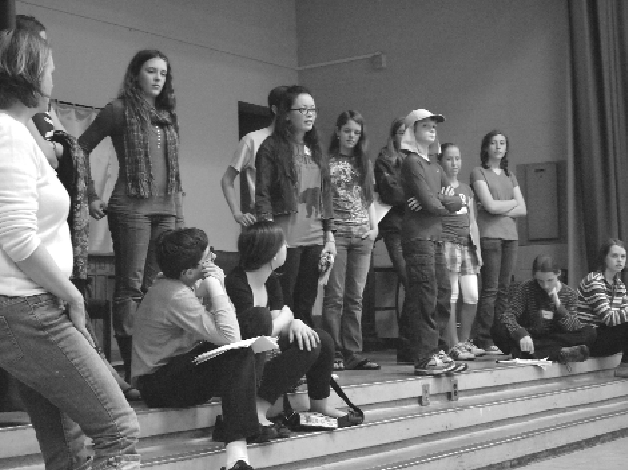 Planet Home School uses classrooms one day a week, all day, for junior high and senior high instruction such as forensics, civics, and biology. Planet Home School is a parent cooperative with several local members and others from all around the Twin Cities.

There will be a Summer Arts Blast series of day camps July 18-22 and Vacation Bible School Day Camp July 25-28. Congregational Administrator Jennifer Schultz said many of those registered are not already affiliated with the church, and sees it as a good sign that they’re reaching the neighborhood.

Pederson added that offering secular as well as faith based programming, “we’re aided by the fact that it’s not a traditional church-looking space.”

Arts will also figure into the renovated sanctuary space, at the center of the old school where temporary classrooms filled what was meant to be a skylit two-story space. Those temporary dividers have been demolished. “We have a lot of intentional plans; walls, and track lighting” to accommodate hanging art, Schultz said.

Outside the building, it’s landscaping, water management, and vegetable gardening. Sheridan Neighborhood Organization recently contributed volunteer time and materials to do some landscape plantings. Fraser Academy is working up a plan for the north end of the grounds.

Through the Emergency Food Shelf Network and the Gardening Matters Gleaning Task Force, Grace Center’s Little Kitchen Food Shelf became a pilot site (along with Waite House in South Minneapolis) to work on connecting with vegetable gardeners in the area, Schultz said. Little Kitchen regularly picks up unsold produce from the Northeast Farmer’s Market, and they hope to connect with others. They’re working with Fruits of the City on starting a community orchard. Gardening Matters encourages gardeners to “plant an extra row” for a local food shelf.

Grace Gardens is a “community garden project benefiting the Little Kitchen Food Shelf and residents of Northeast neighborhoods!” As listed on the Grace Center website, “Through education and hands-on opportunities, Northeast residents experiencing chronic food insecurity will have opportunities to plant, grow, harvest and cook their own fresh, organic produce on-site.” This project received support from a Scotts Miracle-Gro GRO1000 Grassroots Grant.

A Backyard Farm, a team that installed two 4 x 8-foot raised beds, did all the Grace Gardens planting, and are “doing programming for adults and kids,” Schultz said. Urban Baby will be teaching during the Arts Blast. The non-profit organization leads workshops for parents and kids on growing and cooking fresh and healthy foods for babies, toddlers and young children. According to the website, urbanbaby.org, “We demonstrate delicious recipes, each participant has a chance to participate in the food preparation, and we provide nutrition education as well.”

Grace Center may be turning two acres of the south lot into eight 10 x 20-foot beds to be set aside for food shelf clients who want to grow their own food.

The actual site layout may change dramatically based on water management plans being developed with a $10,000 grant from Mississippi Watershed Management Organization. Consultants with SRF toured the site with task force members in mid-May, and will come back July 25 after researching various questions. For example, original school schematics indicated there might be an underground holding area for stormwater, but it wasn’t clear from looking at the property whether that had ever been built.

Other observations: The lowest area of the property is the sandy playground sited at the southwest corner, and as is true of many school properties, the boulevard areas where buses loaded have been paved over in asphalt.

Pederson, said the recent plantings “cut down on the harshness of the red brick. I got a half-price gazebo I hope to get up there.” He added that the main church entrance will eventually be on the west side of the building. “We’d like to raise it up and take away the navy pier look of the place,” referring to the former school loading dock; this modification, too, will be guided by the watershed grant.

The huge parking lot expanse now accommodates frequent volleyball games that “are an organic expression of community” for Ecuadorian players, Pederson said. “They may have started up when the building was vacant; they contacted us to make sure it’s okay.” Early plans called for removing at least 25 percent of the hard surfaces.

A recent change in the local landscape, traffic circles in Fifth Street at the 15th and 16th Avenue intersections, were purely coincidental, they’re part of the Fifth Street bike boulevard. The churches and neighborhood group may end up maintaining them once they’re planted by City of Minneapolis crews.

As everyone settles in, “it’s quite remarkable, the activity, the enthusiasm. There’s lots of people in the bleachers cheering us on,” Pederson said, figuratively, “and working, tangibly. SNO shows strong signs of support. The day camps have good attendance, we’re laying a foundation and starting to be known in the community.”