Gov. Mark Dayton speaks at a press conference Thursday at the capitol. Dayton announced that no budget deal was reached with lawmakers in time to prevent a state government shutdown. (Photos by Anthony Kwan﻿)

The largest government shutdown in Minnesota history began at 12 a.m. on the hour Friday.

Despite more than a week of budget negotiations behind closed doors and signs of progress as late as Thursday afternoon, DFL Gov. Mark Dayton and the Legislature’s Republican leaders were unable to finalize a spending agreement before the deadline.

“This is a night of deep sorrow for me,” Dayton said around 10 p.m. “I don’t want to see this shutdown occur.”

During and after Dayton’s speech, the blame game started up again. GOP leaders reacted with barbed words to the governor’s pessimism for reaching a budget agreement before midnight.

“This isn’t about getting a budget, this is about shutting down government for political purposes,” said House of Representatives Speaker Kurt Zellers, R-Maple Grove. “Dayton threw in the towel.”

Dayton said the reason for the breakdown was the same as it had been all session: a disagreement on spending and taxes. The two parties are still $1.4 billion apart, he said.

He offered to raise taxes for only those Minnesotans who earn more than $1 million — his earlier proposal would have affected the top 2 percent — but Republicans didn’t budge from their commitment to no new taxes. 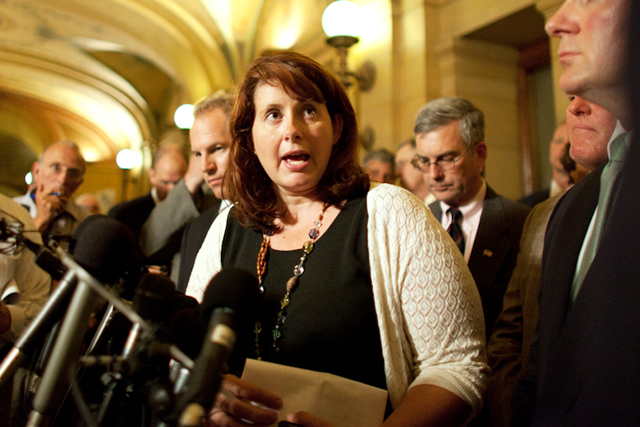 Senate Majority Leader Amy Koch speaks to members of the press Thursday at the Capitol.

Early in the afternoon, both GOP and DFL legislative leaders seemed optimistic that a budget deal was close and a government shutdown could be avoided. But none of the proposals pushed forward were accepted, leaving the two parties at an impasse with only hours before the midnight deadline.

“The agreement was in reach as early as the early afternoon today,” said Senate Minority Leader Tom Bakk about an hour before Dayton announced negotiations had broken off. “It’s much more difficult now than it was four hours ago.”

Republicans offered to beef up the budget by delaying about $700 million in payments to K-12 schools and issuing “tobacco bonds.”

Both Dayton and Republicans proposed an additional $10 million be sent to the University of Minnesota. The Board of Regents finalized the University’s budget June 20, which includes a tuition increase, wage freezes and cuts to employee benefits.

Former University President Bob Bruininks said one-third of any additional funding from the state would likely be used to help students in 2012.

Shortly after 8 p.m., Republican members of the House and Senate took up their official seats in their chambers, waiting for the governor to call a special session that would allow them to pass a “lights on” bill to continue state government functions until July 11.

But Dayton has long opposed the idea of a “lights on” bill, and held on his promise that he would not call a special session until the whole budget framework was ironed out.

The health and human services budget bill has been “the big topic of discussion,” said Senate Majority Leader Amy Koch, R-Buffalo, before talks broke down Thursday.

In his 10 p.m. press conference, Dayton returned to his call to raise taxes. According to the Minnesota Department of Revenue, 7,700 Minnesotans earn more than $1 million each year — less than 1 percent of the population.

Dayton’s latest tax proposal would net the state more than $746 million in tax revenue over the next two years, he said. Republican leaders stood firm in their opposition to any tax hikes.

Protesters in the dome 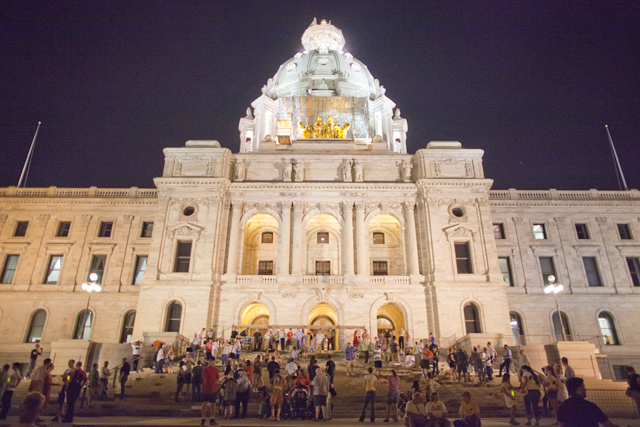 People wait outside the Minnesota State Capitol after the announced government shutdown.

Many of the protestors at the Capitol expressed support for Dayton’s proposal, yelling “Tax the rich” as GOP legislators passed in the Capitol hallways.

Connie Schramm, a retired Hennepin County worker who now mentors kindergarten and first graders, said that while the 500-strong union worker protest Thursday morning was impressive, the crowds were smaller than she expected.

“I know a lot of people who might sit and complain about what’s going on here right now,” Schramm said. “I always have to tell them, ‘Don’t complain, do something.’”

Protestors stayed inside the Capitol until 5 p.m., when State Troopers ushered them out of the building for its normal closing time. People remained on the steps until after midnight, when the Capitol itself closed for the shutdown.