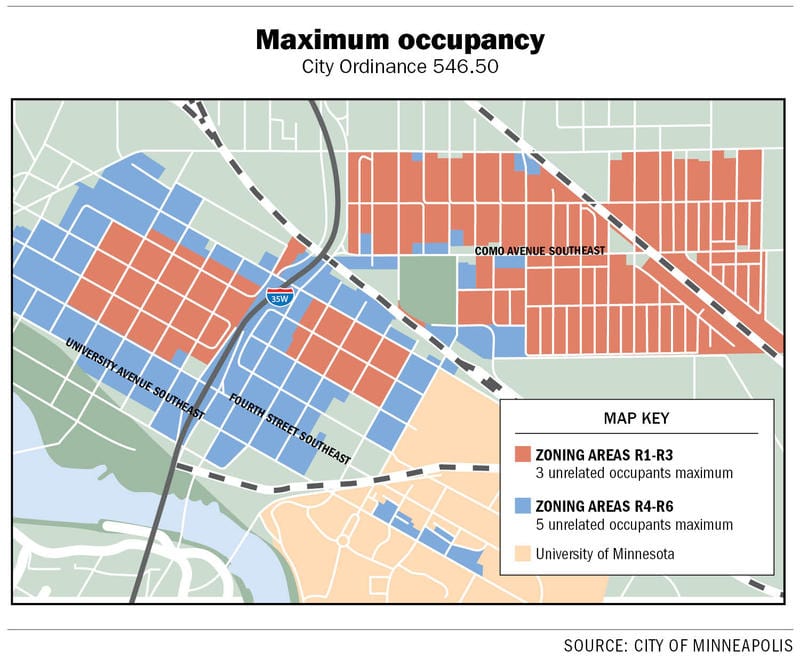 A proposed task force to review Minneapolis’ occupancy codes is running into challenges.

Cam Gordon, city councilman for Ward 2, wants to create a task force through the University District Alliance, which would review whether the city’s current zoning occupancy codes need to be changed. But an alliance committee has tabled the initiative.

The city currently allows three unrelated tenants to live in many single family homes, townhomes and duplexes in University-area neighborhoods.

“My biggest concern has to do with how it singles out unrelated persons as a different kind of class than related people,” Gordon said. “I think that’s poor use of our housing, but I also think its discriminating against people who either can’t find cousins or don’t want to get married to somebody.”

Some of the homes in Marcy-Holmes, for example, have eight to 10 bedrooms, but are still zoned with a maximum occupancy of three unrelated people, said Doug Carlson, Marcy-Holmes Neighborhood Association president.

Carlson said he thinks the current code is fair because it keeps from overcrowding, but it doesn’t take into account the larger homes in the area.

In March, Gordon proposed the task force –– which would be comprised of University students, neighbors, city staff and himself –– to UDA, which serves to improve the school’s neighborhood relations.

The proposal went to the alliance’s livability committee, which voted to table it to make room for other projects, said Jan Morlock, head of community relations for UDA.

“One thing that was very clear is that the alliance has a pretty full work-plan related to livability.”

She said it was a pretty important topic and required a lot of discussion.

“It’s not that the question is not of interest to the member organizations of the alliance — it is. But taking on this task force is not something that the committee was ready to recommend to the board,” she said.

The Minnesota Student Association, however, has been pushing UDA to take on the project.

Kyle Olson, MSA’s newly elected Facilities, Housing and Transportation committee director said he has been working with Minneapolis City Council members, including Gordon, and the neighborhoods to try and review the zoning codes.

He said he is trying to foster relationships between the different organizations in the neighborhoods.

Currently, a lot of landlords are breaking the law, Olson said, fostering a bad relationship with the city and the neighborhood. Changing the occupancy codes would also make more rooms available, decreasing rent in the area, he said.

But while in theory more rooms would equal more rent, there is no evidence to prove that, said Dick Poppele, Prospect Park East River Road Improvement Association president and one of the UDA members who voted to table the task force.

The real problem is absentee landlords, he said, who are just looking to make a profit without taking care of the buildings or the tenants.

“It has created a sort of student ghetto in the area, which completely changed the character of the neighborhoods around the University,” Poppele said.

Right now the UDA is working with the city’s Regulatory Services to require landlords to post the maximum occupancies with their rental licenses, which are not always made clear to residents, Morlock said.

The codes are complicated, and it’s difficult to determine who is related, making it difficult to enforce, Gordon said.

Since the tabling of the task force, Gordon said he’s not sure how it will move forward but that he hopes to continue working on the codes through community engagement.

“I’m not sure at this point if there will be a task force, but it looks like it won’t be through the University District Alliance,” Gordon said.