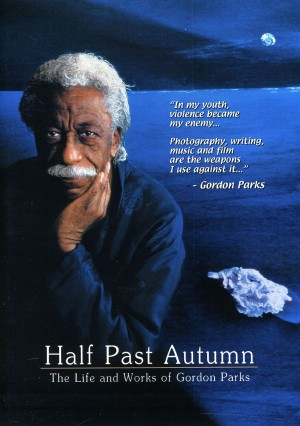 To call Gordon Parks (1912-2006) a Renaissance man might be an understatement to those who knew the late photographer, filmmaker, writer and composer.

Born the youngest of 15 children in Fort Scott, Kansas, his father sent the teenage Parks to St. Paul to live with an older sister after their mother died. However he didn’t get along with his brother-in-law, who threw him out of the house, and Parks lived on the streets. Although he never graduated from high school, he nonetheless embarked on a journey that first began with playing piano in a brothel and playing semi-pro basketball to becoming an internationally renowned filmmaker.

But it was as a train waiter where Parks reportedly came across a magazine that contained documentary pictures, which convinced him to buy a camera at a pawn shop in Seattle. He then taught himself how to use it, and had his first photo exhibit in a Minneapolis photo store.

A St. Paul fashion store owner’s wife lobbied for him to be hired at her husband’s store to take photographs of the models, and Parks’ photographic career took off from there. He then became an apprentice with the Farm Security Administration and was a photo correspondent for the Office of War Information during World War II, embedded with an all-Black flyers unit stationed near Detroit.

As a freelancer Parks’ photos appeared in Vogue, which convinced the Life magazine photo editor to hire him. He was assigned two key assignments: a photo essay on the Harlem gang wars and to photograph the latest Paris collections. Parks would work for the legendary magazine for parts of four decades as their only Black photographer before leaving in 1972.

He also wrote memoirs, novels, poems and screenplays — Parks also wrote and directed The Learning Tree (1969) and the iconic Shaft (1971) and its sequel Shaft’s Big Score! (1972), and helped found Essence and was its editorial director for four years.

The Film Society of Minneapolis/Saint Paul last November hosted a Gordon Parks film festival at the St. Anthony Main Theatre that featured four of his films and a HBO documentary, Half Past Autumn: The Life & Works of Gordon Parks, to help mark his 100th anniversary of his birth.

After the November 23 Half Past Autumn screening, the MSR talked to both Parks’ niece Robin Hickman and director Craig Rice.

“I wanted people to see [Parks] as an active, creative artist and not as somebody who has done work but [as] somebody who enjoyed work. The deal I had with Gordon was that I had the right to ask any question, and he had the right to turn me down. He was basically open for that,” said Rice. 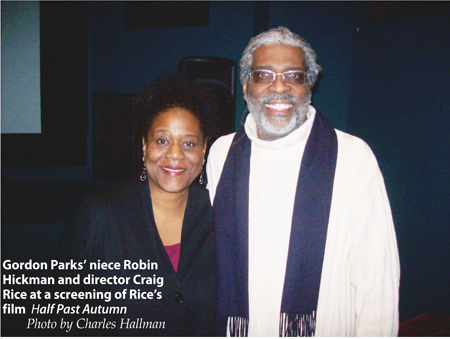 Said Hickman, “It was so hard [but] it was an amazing journey. I think just enjoying going deeper with him, going deeper learning more [about him]…and his seeing that I took to heart all the things he taught me as a mentor…to walk with him and to walk in a professional level, then go even deeper into family and building a deeper trust.”

During the post-screening Q&A session, both Hickman and Rice noted the difficulties in getting the film on screen. Rice later admitted that he believed one reason was that “a lot of people didn’t understand the breadth of Gordon’s life.” He further explained that Half Past Autumn “was not [done] in chronological order but theatrically structured.”

After Parks saw it, “He just started crying and said thank you,” said Rice. “I knew there was a responsibility of making it [that] me and Robin have in entrusting his legacy.”

Hickman, who once worked at TPT, said she tried selling Half Past Autumn to PBS, who turned it down, but eventually it was picked up by HBO.

“The film was not easy to make, as nobody wanted to make this movie,” said Rice on the film — actor Denzel Washington was a co-producer. “This is one of my best pieces. I thank God for…putting Gordon in our lives.”

Although a St. Paul high school is named for him, Hickman said that she wants Parks to be more recognized in St. Paul, his adopted hometown — she is currently involved in a project to have a statue of him created and installed downtown. “He is celebrated all over the world — but the goal is to make the Twin Cities the place to experience Gordon Parks. We have to make it happen in Minnesota because it’s bigger than Uncle Gordon.

“Going deeper” into her uncle’s life story “was most precious,” added Hickman. “There were so many things that he entrusted [with] me.”

Hickman wants the world to know, especially the Twin Cities, that her uncle was “more than just Shaft.”

“Shaft was cool, but you can’t dismiss Life magazine and that Uncle Gordon was one of the founders of Essence. He had many people of color working behind the camera with him.

“I have a different level of courage of doing my part of keeping his legacy alive,” concluded Hickman of Gordon Parks. “He taught me well how to do that. I’m going to do it and take authority of the things that were given to me to do.”

Half Past Autumn: The Life & Works of Gordon Parks is available to rent from netflix.com.