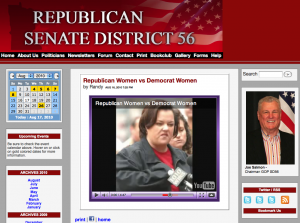 While the GOP in Senate District 56 recently removed from its website a video I highlighted earlier – which compared the relative attractiveness of women in the GOP and Democratic Party – reactions are still coming in, including, most notably, from district Republican House candidate Kathy Lohmer, who’s calling for the resignation of the SD56 webmaster.

District 56 Sen. Kathy Saltzman (DFL-Woodbury) says she was sent the video by an angry constituent who decried the “offensive ‘beauty contest'” characterization of women in politics. The video showed elegantly clad Republican women, serenaded by audio of Tom Jones, followed by an unflattering series of images of Democrats like Hillary Clinton and Janet Reno, set to the song, “Who Let the Dogs Out?”

Saltzman dismissed the video as a distraction during rough economic times.

“As a state, we are facing a number of serious and difficult issues, not the least of which is a $5 billion deficit,” she said in a statement to the Minnesota Independent. “I don’t see how this is beneficial or helpful in anyway.”

But a Lohmer had harsher words about the video.

“I just heard about this within the last 1/2 hour – and immediately called for the resignation of our web site manager for the BPOU [Basic Party Operating Unit],” she wrote in an email. Lohmer, who is running against DFL Rep. Julie Bunn and independent Jim Martin in 56A, acknowledges she hasn’t – and likely won’t – watch the video. But she says she took swift action.

“I also asked my website manager to take the SD56 webpage link OFF of my site,” she continued. “I don’t want to be connected in any way to that type of behavior.  I detest the dirty campaigning, the sign stealing, etc. All of these tactics do nothing to show the clear differences between my opponent and myself. My campaign is about integrity, common sense, fiscal responsibility, personal responsibility, respect for life and respect for the Constitution.”

Earlier today, Andrea Kieffer, the other female GOP-endorsed candidate in the district (for the 56B House seat), called the video “juvenile” and said she didn’t support it. She told the Minnesota Independent she’d request the removal of the embedded video from the SD56 site. She’s running against incumbent DFLer Rep. Marsha Swails.

Lohmer said she briefly considered whether the video had been posted by a hacker. Webmaster Randy Brown told the Minnesota Independent this afternoon that he did post the video and that he found it funny.

“[I]ts only intention was to bring a smile to a few peoples faces, and possibly irritate a few others,” he said. “Is it fair? Does that matter? It wasn’t intended to be fair. It was intended to be funny.”

Lohmer concluded her email, “If there is someone in our BPOU that did this, he or she should apologize immediately.”