Harun Abda watches a movie with his family Monday afternoon at their home in St. Paul. Abda will be competing at the U.S. trials over the next week to qualify for this summer’s Olympic Games. (Photos by Blake Leigh)

Harun Abda traveled more than 7,000 miles when his family escaped from Ethiopia almost a decade ago.

Abda will have a much shorter distance to the finish line when he competes at the U.S. Olympic trials in the 800-meter run this week.

The soon-to-be Minnesota senior has come a long way — from being a minority in his native country to a refugee in Kenya to one of the track team’s top runners.

Abda never ran track in Ethiopia, where school and sports were separate. He played on the soccer team at Fridley High School, but a friend convinced him to join track and field as well.

Back then, he didn’t know what the state meet was. But in a few years, he developed from a high school standout to a national competitor. His older brother Kamal said the family takes pride in Abda’s success.

“His little siblings, they look up to him for everything. He’s our model,” Kamal Abda said. “We have a lot of hope on him to get somewhere and represent the whole family.”

While Abda appreciates his family’s support, he says it sometimes causes his performance to suffer.

“I feel like there’s a lot of responsibility on me when I start running,” Harun Abda said.

With the Olympics looming, this year mounted the stress even more for Harun Abda. Last year, Abda qualified for a national meet but was not a U.S. citizen yet. With his citizenship now in hand, Abda has the chance to compete for a spot on the U.S. Olympic team.

Abda said the reality of his family’s hopes began weighing on him during his disappointing outdoor season, which culminated with an early exit at the NCAA championships.

He said he plans to approach the Olympic trials differently.

“I just want to go there and just run, have fun. I think I forgot how fun track is,” Abda said. “I forgot how to enjoy the race.”

With Abda’s dual citizenship, he could have decided to compete at Ethiopia’s Olympic trials. He said the probability of his making the team would be greater if he did.

“Wearing the Ethiopia jersey, it will look really bad on me [because of what] they did to us,” Abda said. “We came here. This is the country that gave us freedom.”

From the outside, it may look as if Abda is holding his career back. His teammate and friend David Pachuta discussed the decision with him often and said he understands his motives.

“He chose to come to America, he chose to become a U.S. citizen all for a reason,” Pachuta said. “The fact that he would choose to not go [to] the Olympics as a United States citizen rather than going to the Olympics as an Ethiopian citizen speaks a lot to his character.”

“He sees himself as a U.S. citizen,” Thornton said. “Harun never takes the short road. He always takes the harder road.”

Although Abda is keeping his Olympic dreams in check, his family isn’t as easy to reign in.

“Sometimes they are excited more than me — more responsibility again,” Abda said.

Kamal Abda said his brother representing the U.S. would be especially meaningful to their mother.

“She raised us, and we went through some dark times,” Kamal said. “It’s like our dream came true, not only his dream.”

From refugee to runner

The Abdas are Oromo, the majority cultural group in Ethiopia, but not the one politically in power. Abda’s father was the equivalent to a city mayor in their hometown of Shashamane.

The nation’s leaders imprisoned him when Abda was six after the opposing political party took control.

“We don’t even know if he’s alive or dead. … You don’t know where he is,” Abda said. “They just break [into] the house and take our dad.”

Abda and his 16 siblings didn’t see their dad for seven years.

The next time most of the family saw him, they were on their way to freedom.

Abda’s father escaped from prison in 2003 and ran to Kenya. He sent Harun’s uncle to tell the family to follow him to Kenya before they could be harmed.

Abda’s mother and her children traveled to the border of Ethiopia and Kenya, and they managed to cross the border without any official documents.

From there, they had to carefully ride a bus to reach the refugee camp in Nairobi and meet their father. Every time the bus reached a checkpoint, they had to get off and hide so the authorities wouldn’t see they had no papers. Then they would walk ahead two miles, catch another bus and repeat the process.

The family stayed in Nairobi for three years.

When Abda’s father was in prison, the oldest brother Salahadin fled to Kenya and, with the help of the United Nations, immigrated to the U.S.

Salahadin Abda settled in Minnesota with his wife and sponsored his family in 2006. All made the journey except three siblings who were older than 21 and could not be sponsored under the UN’s rules. 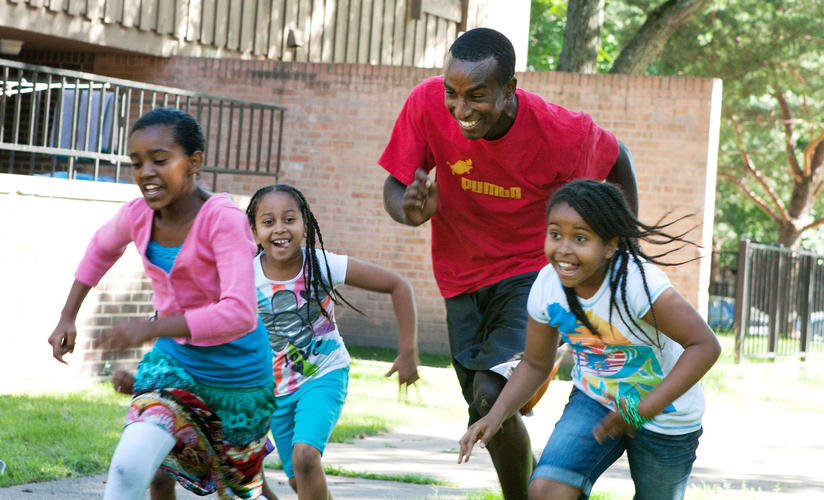 Abda sprints against younger family members outside their home Monday in St. Paul. The Abda family escaped from Ethiopia in 2003 and spent three years in Kenya before immigrating to Minnesota.

But staying in Kenya may have seemed less daunting than coming to America.

“I felt like someone who got lost in a forest,” Abda said.

The transition from Oromo to American culture took a lot of adjusting for the whole family.

While they were grateful that Salahadin Abda gave them the opportunity to come to the U.S., they weren’t thrilled by the idea of cold weather.

Harun Abda said the hardest aspects of Midwestern life were the winter and the language.

None of the Abdas spoke any English when they first arrived in their new country. The children picked it up quickly through summer school and extracurricular activities like soccer and eventually track and field.

“When you don’t know a word, [the Minnesotans] help you find it,” Abda said.

Holidays in America also baffled the Abdas. They didn’t know what Christmas was. They also weren’t aware that birthdays were a big deal, so they weren’t concerned when the UN assigned them all birth dates of January 1.

After six years in the states, though, Abda said the family has adjusted.

Although Harun Abda’s family is large, he said it is “really close” and “always together.”

“Whatever happened, family comes first,” Kamal said. “We stick together.”

Abda said his attachment to his family was the determining factor in his choice to attend Minnesota over the many other schools that had offered him scholarships.

“My family didn’t want me to go away from them,” Abda said.

Abda trained alone his first few weeks with the Gophers while the NCAA tried to obtain his school transcripts from Ethiopia to prove his eligibility. Abda said that time away from his family and without a team was lonely.

When the NCAA eventually granted him eligibility, he said he still spent most of his freshmen year not talking and “smiling at everyone.”

Now, he’s a member of the family. He said most of his friends are teammates from track.

Pachuta, who trains with Abda everyday as a fellow 800 runner, said the team has grown close by going through hard times together — just as Abda did with his family.

“When you go through some tough stuff like that with your teammates, it’s only natural to want to hang out with them when you’re not at practice too,” Pachuta said. “They’re honestly like my family here.”

Abda found a mentor in Mead, a Somalia native.

Mead said he can’t take too much credit for Abda’s accomplishments.

“He comes from a well-raised family. … He had all the help he needed,” Mead said. “I’ve come from a similar background because of the culture — I think we’ve always had that in common.”

Pachuta, Mead and Abda are the only current Gophers track athletes competing at the U.S. Olympic trials June 21 to July 1.

As for his chance of making the Olympic team, Abda is realistic. His expectations center around his individual performance, not the outcome. But he won’t rule himself entirely out.

“It would be like a dream coming true,” Abda said.