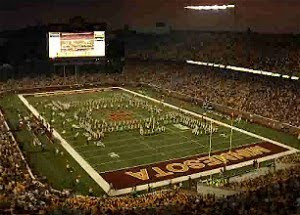 The University of Minnesota marching band formed the letters of stadium-sponsor TCF Bank’s name at a recent Gophers game, according to a new fawning video produced about the field.

But university officials haven’t yet said whether the band was required by the bank’s naming-rights contract with the school to perform the corporate logo.

TCF paid $35 million for a deal TCF head Bill Cooper says is “half charity and half business.” (Hmm: If it’s part charity, is TCF getting tax breaks in return?)