From the average user’s standpoint, Google+ has been a flop. Soon after everyone joined, Google’s social network turned into a ghost town as most users realized that it was basically a Facebook that was less intuitive to use, and with many fewer active users.

Google, though, is still Google, and many people who work at enterprises where search engine results drive a lot of traffic—such as, for example, news sites like the Daily Planet, where over half of all traffic typically comes from search engines—are remaining warily engaged with Google+ out of respect for Google’s power to weight results. When Google calls us to the plate, we figure we’d better play ball.

Now, Google seems to be trying to trick us into recruiting our friends to play too. Take a look at the above screenshot, taken from my Google+ home page today. Would you look at that and assume that Makula Dunbar is a Google+ member already? I sure would, and I assumed the same thing about another friend whose name initially appeared below Makula’s. “You may know.” Well, yes, Google, you are aware that I’ve e-mailed these people, so you know I know them.

Hover over a name like Makula’s, and here’s what you see. 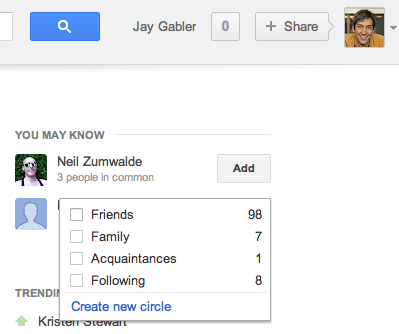 Any indication that Makula’s not already signed up for Google+? Nope, nor was there any indication with my other friend, so I added her to my circle of friends. Some friend I turned out to be, though, when my friend received an e-mail saying, “Jay Gabler added you to his circles and invited you to join Google+.”

I learned about the e-mail because she responded to me with one word: “No.”

Wait, I was inviting her to join? I thought I was just adding her already active Google+ account to my circles. Life online is sometimes confusing, but there seemed to be nothing confusing about that “you may know” box. Let’s call this Google+ practice what it is: deceptive.