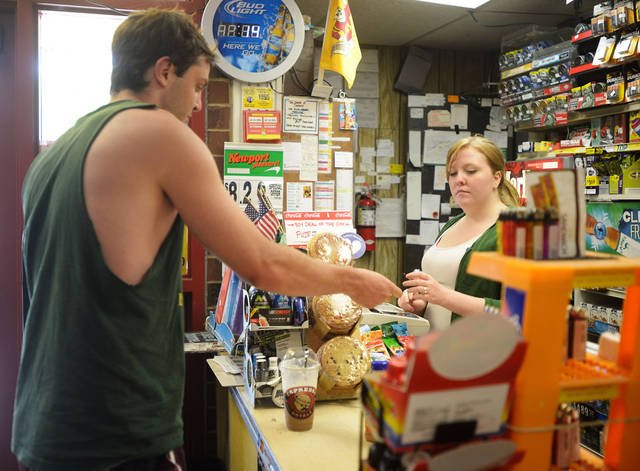 Economics junior Grant Savage pays Staci Caldow, right, for items at House of Hanson July 20, 2013, in Dinkytown. Smaller grocery stores, such as House of Hanson, are being affected by bigger chain convenience stores such as CVS Pharmacy and Walgreens. (Photo by Emily Dunker)

But development in Dinkytown isn’t the only thing displacing the small store.

Chain convenience stores, such as CVS Pharmacy and Walgreens, have been making their mark near the University of Minnesota in the past few years, leaving some smaller convenience and grocery stores unable to compete.

CVS took a large chunk out of House of Hanson’s business when it moved in a few blocks away in 2011, owner Laurel Bauer said.

To survive against the big chains, she said

mom-and-pop shops will have to evolve and cater to their customers in a way large corporations can’t.

“Be there to do the unusual,” Bauer said.

With a new Walgreens opening just down the street from CVS on Washington Avenue Southeast, U of M Market owner Ahmed Mohamed is worried about his store’s future.

Mohamed said he was aware CVS was moving in when he signed the lease but wasn’t worried about it at the time.

But now Mohamed is unsure of what will become of his shop.

“The big fish is coming,” he said. “I have to do something.”

“Cheap is definitely our goal to cater to students,” Gavic said.

Joe’s also stocks up on gluten-free and vegan choices, popular options with students.

“We bring in whatever opportunity to be unique,” Gavic said. “The not-so-corporate vibe also helps bring in students.”

Joe’s customer Bree Schmidt said she prefers going to the local shop over CVS for the customer service.

Maxwell’s Market owner Ramadan Hussein said he doesn’t have to compete with CVS because his store is on the other side of I-35W, but he worries about the area changing in the future.

“We depend on the kids,” Hussein said. “If CVS moves across the street, I’ll put out the closing sign.”

“You’re not going to smoke hookah at CVS,” he said.

Some students who shop at CVS said they weren’t aware of other options.

“This is the only place I know,” said mathematics senior Jiaqi Zhang.

The familiarity of chain stores makes them more appealing to students, Bauer said.

“It’s an err in their perception,” she said.

After more than 80 years of business, Bauer will say goodbye to her family’s store at the end of the month.

Graphic design junior Brendan Meier said he prefers to shop at Bauer’s store for its selection and sense of history.

Related: Dinkytown’s House of Hanson to close on July 31

Read more about development in Dinkytown.