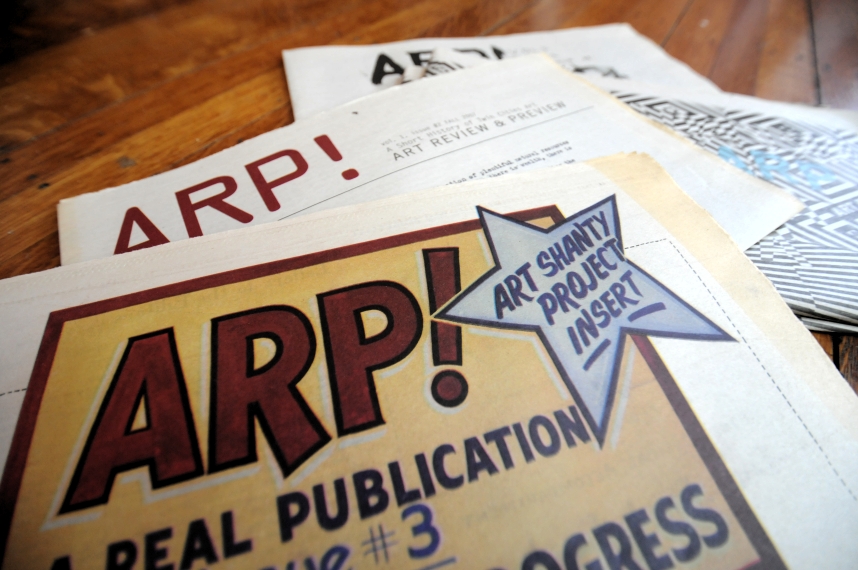 Tonight at Art of This, the local art journal ARP! will release its book-length final issue as editors Ariel Pate, Tiffany Hockin, and Troy Pieper lay the publication to rest and reclaim the vast amounts of time they’ve put into producing the quarterly publication on a volunteer basis. I’m proud to have contributed a handful of articles to ARP! over the course of its life, and like everyone else in town, I’ll miss the first-rate writing and design that has been distributed in fat stacks of small newspapers on four much-anticipated occasions each year.

ARP! (Pate and Hockin chose the name before it was determined that the acronym would stand for “Art Review and Preview”) has not only been a repository for some of the sharpest writing about the arts to be published locally over the past few years, it’s embodied a vital spirit on the local arts scene: sarcastic but not cynical, critical but constructive, intellectual but inclusive. Further, ARP! has always been not just a publication about art but a work of art in and of itself. There was the issue with the centerfold timeline of art in the Twin Cities; the issue that was entirely handwritten; the issue for which each copy was individually numbered.

Like its editors, ARP! contributors have been largely unpaid (there were many writer-appreciation events, and cash dividends were shared when revenues permitted), a situation for which Pate, Hockin, and Pieper faced criticism in the waning days of the now-defunct Visual Art Critics Union of Minnesota. When such good writing was donated freely and made just as freely available, the argument went, it undercut the market for arts writers who justifiably wanted to be paid for their work. I sided with ARP! in that debate: the publication simply would not have existed if we’d all required payment for our writing at even the reasonable freelance rate of a quarter a word—and if ARP! hadn’t existed, we’d all be the poorer.

In addition to providing my first local art criticism assignment—I walked into the chaotic Caroline Paquita/Polaroid Kidd installation at Art of This in summer 2007 and thought, “What the hell am I ever going to write about this?”—the ARP!-ers gave me my first taste of la vie bohème, Minneapolis-style. That summer of 2007, I’d just finished graduate school and come home to St. Paul. I had no job offers, I was living with my parents, my high school friends were off raising kids in the suburbs, and my college and grad school friends were scattered across the country. My plan was basically to do what I wanted to do, try to meet some interesting people, and let everything else sort itself out. When I found myself one summer night sitting on the roof of Robert’s Shoes for a writer-appreciation picnic, with Pate grilling okra and people climbing in and out of windows by the light of the setting sun, I decided that my lack-of-plan was working out pretty well. It still is.

So thanks, Ariel, Tiff, and Troy, for ARP! And thanks for art, and okra, and all the good ideas and all the bad ideas. It was a hell of a run, and now ARP! is dead. Long live ARP!