My husband and I have a favorite restaurant, Pazzaluna, in downtown Saint Paul. The Italian eatery has happy-hour pizza and wine specials that keep us coming back. Even better, its energy is so good that a bad mood can be lifted just by walking in the door. Last week, I realized the source of the good vibes. As they say in real estate: location, location, location. Pazzaluna is located in the same place once occupied by Frank Murphy, a women’s clothing store. 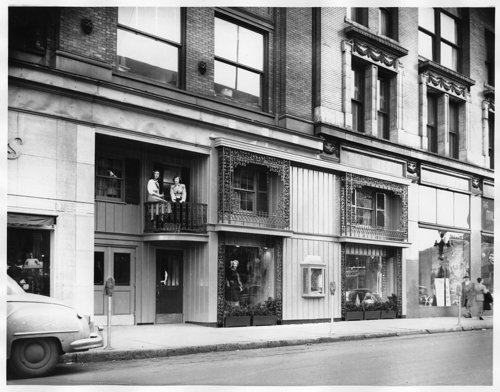 As many times as I have eaten at Pazzaluna, I hadn’t made this connection until I finalized dinner plans with a friend last week. She wasn’t sure where the restaurant is. “On the corner of St. Peter and Fifth,” I said, “where Frank Murphy used to be.” When the words popped out of my mouth, they surprised me. Aha! I thought. Now I know why the restaurant has such great spirit. Frank Murphy had been a favorite shopping place for the women in my family. So chic and up-to-date that it could have been in New York City. So lucky for us that it wasn’t.

Just a few days after that conversation with my friend, an obituary caught my eye. Sadly, Frank Murphy’s daughter had passed away. Once again, I remembered the many trips I took to that lovely specialty store. When I shopped there with my mother, this woman often helped us. When my teenage friends and I stopped in to look for dresses for dances, she never acted as if we were in the wrong place and should browse in the junior department of Dayton’s instead.

Frank Murphy’s give-away sales were world-famous. Held in the ballroom of the Saint Paul Hotel, just across the street, they received extensive news coverage. Because I couldn’t bring myself to try on clothes in a giant room with no privacy and the possibility of television cameras, I never braved one of the sales. I’d seen the news reports, though: Hand-to-hand combat among crazed women ready to do battle over articles of clothing held no appeal for me. But my sisters, always stronger than I, were able to hold their own and bring home bargains galore.

Frank Murphy was the go-to spot for special occasions. When my daughter was a freshman at St. Thomas and lived on campus in a dorm, she called to tell me about a formal winter dance. Of course, she needed a new ensemble. She and I headed to Frank Murphy, the same store where we had found the fancy frock for her high school senior prom. “If you can’t find the perfect party dress at Frank Murphy,” I told her, “then the dress doesn’t exist” — the same thing my mother had said to me.

In fact, years before, when my parents had divorced, my mother was down in the dumps. My year-younger sister and I knew just the pick-me-up she needed. We borrowed Mom’s car and drove to Saint Paul, where we found three lovely outfits at Frank Murphy. Of course, being teenagers, we had no means to pay for Mom’s gifts, so we put them on her charge account. And had them gift-wrapped.

When my husband and I meet our friends for pizza at Pazzaluna next week, I’ll ask if they can feel the vitality and sparkle of the place. I’ll tell them my stories about the building’s previous tenant and propose a toast to the Murphy family, which made sure the women of my family were, as my mother would say, “Dressed to the nines.”