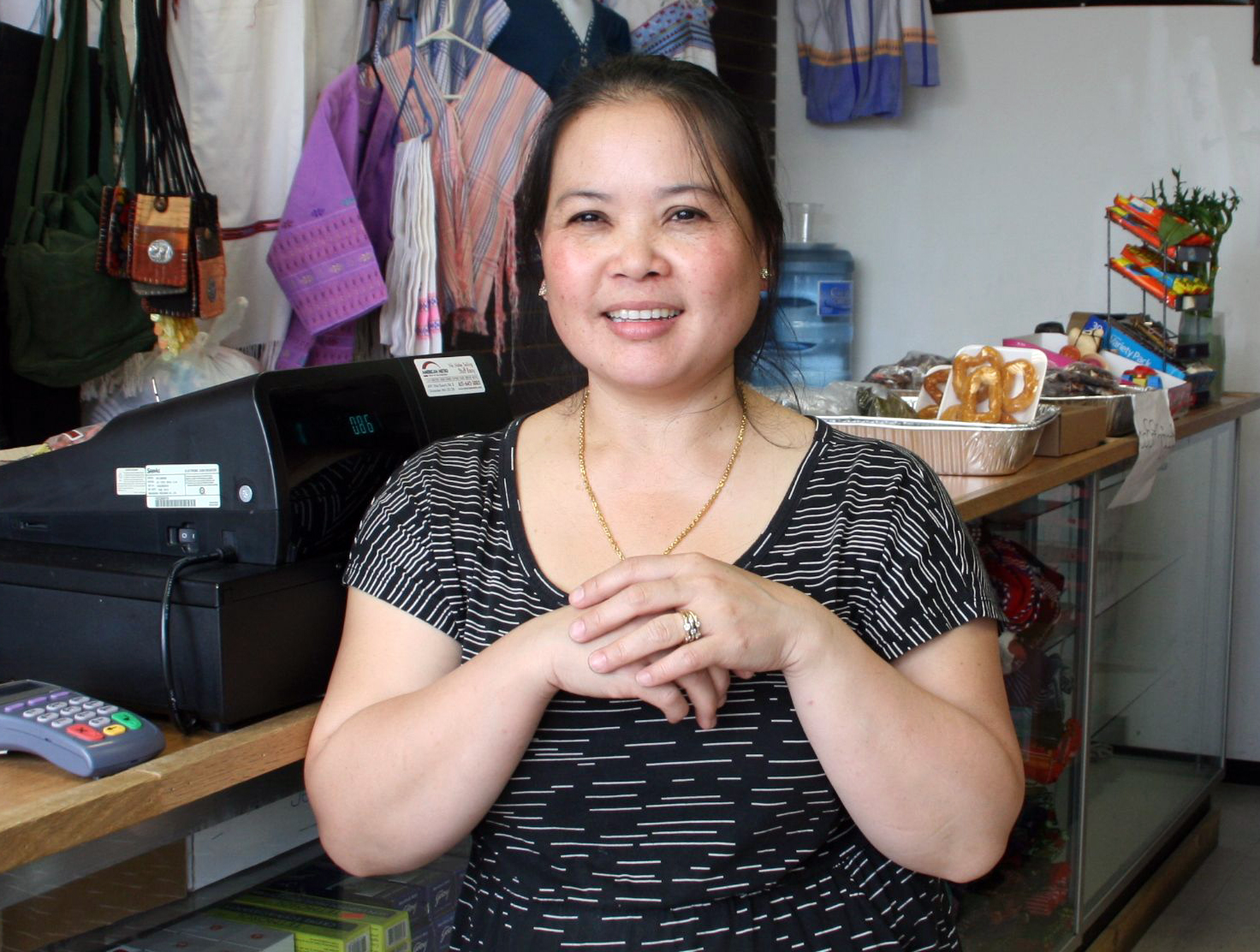 I was searching for a certain Chinese grocery store near Rice Street in St. Paul when I spotted the sign: “Golden Karen Grocery.” I thought I might have read it wrong, so I did a U-turn and pulled into the parking lot. I’d read it correctly. I hadn’t known that there was a Karen grocery in the Twin Cities. As it turns out, there are two of them. I’ll visit the second one in the future.

The Karen (pronounced ka-REN) are two related ethnic groups from Burma (known legally as Myanmar) a country at the western edge of Southeast Asia. In the last few years, the government has gone from a brutal military dictatorship to a less brutal dictatorship with a hope of democracy.

For decades, the government of Myanmar focused on the Karen, sending troops to brutalize and persecute them. Many Karen fled their ancestral mountain homes, settling in places as diverse as Thailand, Sweden, Ireland, and Canada. Some came to the United States, with approximately 7,200 Karen moving to Minnesota. 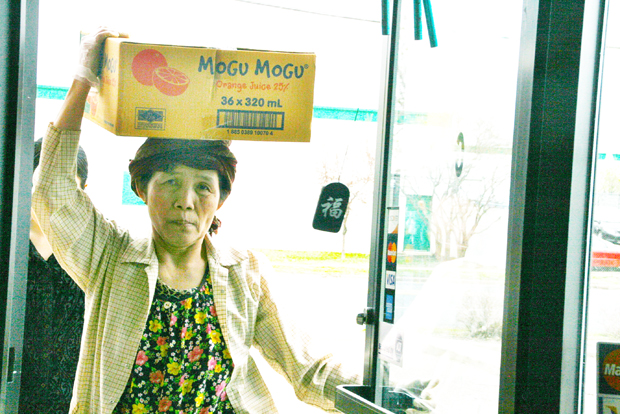 That’s how Kyu Nan and her husband Tun Nan ended up in St. Paul. She arrived in 2001 after first living in Buffalo, New York.  “I didn’t have friends in Buffalo and I was lonely,” she says. “But now I have a lot of friends. I like St. Paul. It’s a place where my two kids can get a good education.”

Their tiny but pristine family-run grocery opened three years ago. Nan’s aunt, Tin Aung and her cousin Shew Thein work at the store, too. On the day I visited, they were moving boxes of grocery items from a pallet outside to the store’s shelves. 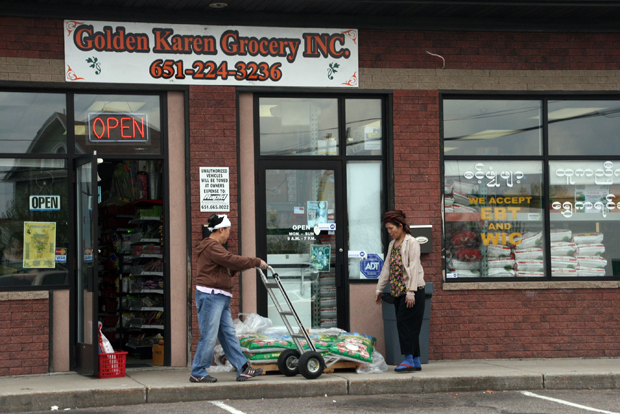 The store carries a lot of Thai products; Karen foods have been strongly influenced by Thai recipes with soups and curries are at the heart of the cuisine. Fish paste—ngapi—is an essential.

Ngapi is compressed fermented salted ground fish, and it’s used in nearly everything the Karen cook. “I like fish paste with vegetables and fruit. I could eat it every day,” says Dah Salween, Youth Academic Support Coordinator at the Karen Organization of  Minnesota. “You can buy the fish paste in a store, but some people make it themselves.” (See this link for another type of Karen fish paste.)

“My parents used to make it,” he recalls. “They would catch a lot of fish to make the paste. You lay the fish on the ground for a couple of days until it dries in the sun. Then, when it’s dry, you mash it and add salt, put it in a container and leave it for a week—or maybe a month. Then, it becomes fish paste.”

The biggest sellers at Golden Karen Grocery are the vegetables and the rice. “My people like to eat vegetables.” Nan says. 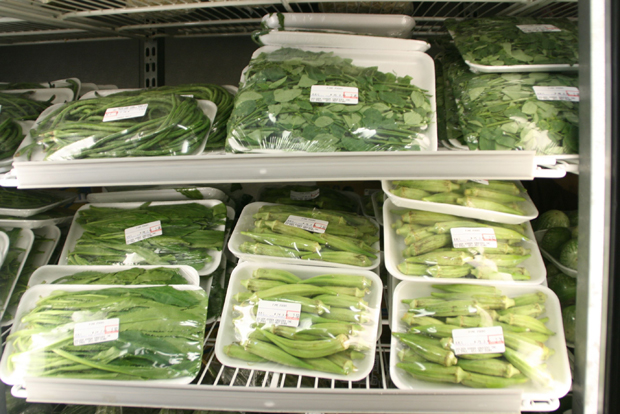 She shows off the packages of tiny Thai eggplants, cucumbers, kantola (related to bitter melon), okra, and fruit such as login, pickled luk neing (frozen and in jars), and a variety of herbs like cilantro and lemon grass.

The store also sells a lot of fish. The freezers are filled with dozens of varieties from ca linh, a type of baby carp, fresh water silver barb, and bac ma hap, also known as Indian mackerel. 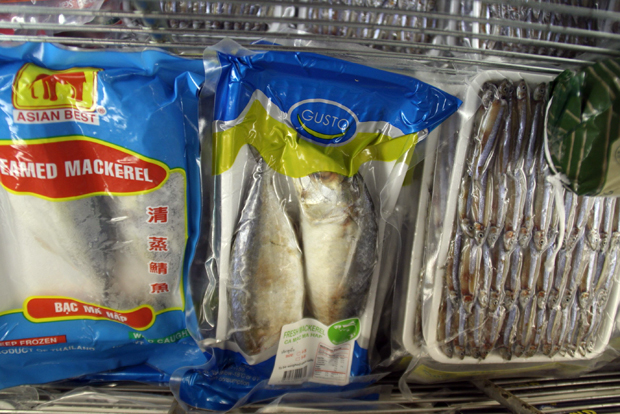 Next to the fish are packages of dak dae. “Good for Baiting,” it says on the back of the package, but these silkworm pupae are really for snacking. It’s a popular street food in Burma and Thailand. “You fry the worm in oil,” says Nan making a face. “Some people like it. But, I don’t.” But, it’s a protein superfood. Golden Karen also carries whole, frozen, ready to cook frogs, low in cholesterol, and high in protein.

There is almost no meat for sale at the store. “We don’t have the room,” says Nan. But you can pick up packaged snack food including plastic bags of “crispy beans”—yellow beans mixed with flour and seasonings and then deep fried. 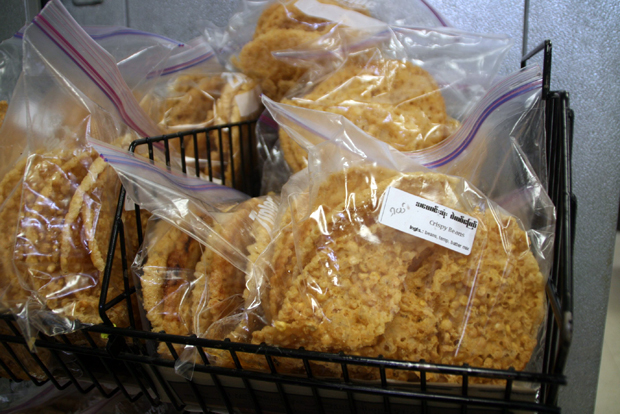 The store also carries some traditional Karen clothing—the Karen are known for their fine handmade textiles—and some arts and crafts. Nan also shows me what looked like a gong with a shofar hanging from it. These, it turns out, are important cultural ritual items. The bronze drum and the buffalo horn are played at the beginning of ceremonies to bring everyone in the community together.

Nan says that her customers are almost entirely Karen from Burma. “No Chinese, no Vietnamese, no Thais shop here,” she observes. But Nan and her family are welcoming and warm. They are happy to answer questions, even with the language barrier. If you want to try a new type of food, or even if you just need a smile, check out Golden Karen Grocery, 162 Pennsylvania Ave. W., St Paul.