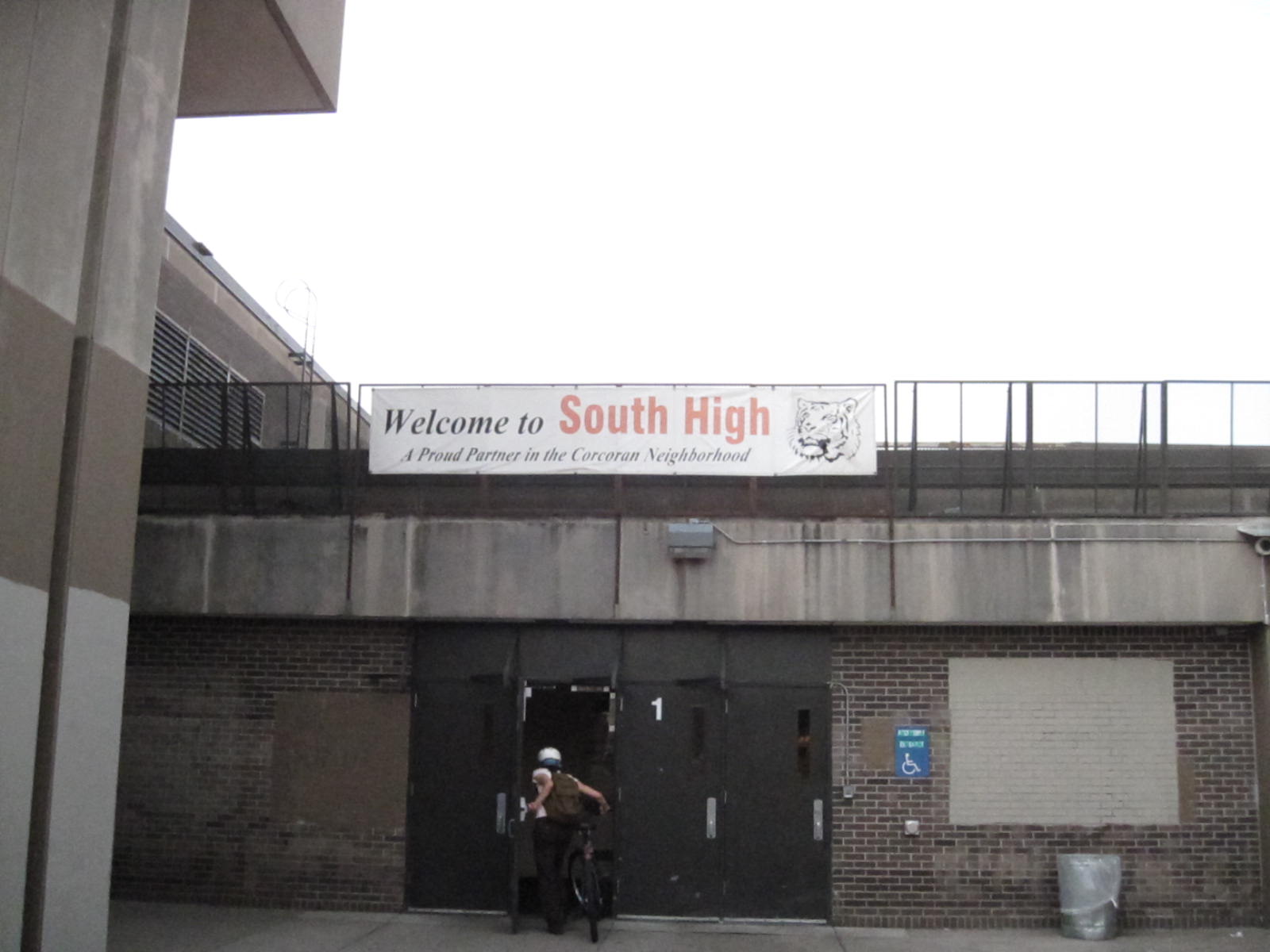 I have to admit I was wary at first. I’ve only been back to South a few times. I’ve been to see a few plays and a band concert or two, but it’s always a bit emotional for me. High School was such an intense, hormonal, depressing place, and although in some ways I really loved my time there and figured out who I was as a person, it’s hard to go back and see it as just any other school—for me, I always seem to recall all the feelings of insecurity that dominated my adolescence.

In some ways, I couldn’t have asked for a better school. Unlike my junior high, Anwatin, which was very cliquey, South had a much more lenient attitude toward difference. Part of that may be because it was the late 90s, and the “alternative” scene was going strong.  I remember I got a letter jacket after being on the varsity soccer team my freshman year, and never wore it again because it was un-cool to be a jock.  I didn’t even fit in with the alternative crowd, and finally found a place for myself doing theater, where there were other people who were as weird as me who made me feel like I wasn’t quite as much of a freak as I thought I was.

As I biked over to South on Tuesday, it looked very much the same from the outside.  It was after school let out, but there were lots of students lounging around outside. There was one group of girls in particular, all wearing sun dresses with their shoes off, that looked as if it could have been my group of friends during lunch or during 6th period, which many of us didn’t have to go to because we took PSOP classes (now PSEO—Post Secondary Enrollment Options.)

I also noticed, the same rich diversity of students hanging around—African American, Hmong, Latino, etc.  I wonder if the school has gotten any better at integrating the student body?  When I went, there was quite a bit of self-segregation, aided by the school’s different programs—the Liberal Arts Magnet, the Open program, the All Nations Program, and the regular school.  While there was value to each of the programs, I noticed that my Liberal Arts classes were far whiter than the diversity of the school as a whole.

As I entered the building, there was Ellen Fenster, who had been in a couple of musicals with me at South, and who now runs the program.  She was there with a friend of mine, Nathan Tylutki, an Arts High School alum, who is currently a teaching artist there. Ellen was as cheerful and pleasant as always, busy running the program.  “Don’t let Sheila Regan in,” she said jokingly to the monitor checking my I.D., “she’s nothing but trouble.”

I asked the monitor how to get to the third floor.  When I went to high school, the joke was that when a freshmen asked you where something was, you told them it was on the third floor.  That’s where the (mythological) swimming pool was, we would explain. Back then, the third floor didn’t exist.  Today, there is a third floor, which thankfully has more windows than the school’s original design, where, the saying went, there were as many windows as Stillwater Prison.

When I got to Tou SaiKo Lee’s classroom, they were engaged in a discussion about what justice means in Minneapolis.  Lee had written on the board different aspects of inequality that the students had come up with—schools, police, access to lakes, etc.  When I walked in they were talking about preconceived notions of North Siders vs. South Siders.  Two of the students, who had grown up on the North Side, spoke of their struggle with identity, when everyone thought the North Side was only filled with violence.  This is the South I remember, too, I thought.  Despite my misgivings on the lack of integration in the school, the discourse was predominantly pro-diversity, and it was at South that I learned about what social justice means.

There were only three students in the class that day, which didn’t surprise me, as it was the first hot day of the spring.  No doubt the other four students deemed it more important to bask in the sun that day. But despite the small number, I was overwhelmingly impressed with them.  These were kids who were discovering themselves, and discovering that as artists, they could channel negativity into something profound and beautiful.

On my way out I stopped into the theater auditorium, which has been renovated. There were tech students working away at the sets for their latest production.  Just as many of my South peers are currently part of the Twin Cities Theater scene (Nathan Keepers, Emily Gunyou, Byrd Shuler, Ben Tallen, Brian Balcom, and others) I imagine these young people too will be our future set and lighting designers, directors, actors, etc).

I left feeling happy, and hopeful.  Yes, high school can be a horrible, suffocating place. But it is filled with young people figuring out who they are, and what this world is all about.  If the sampling of students I saw at South this week was any indication, the future has some hope yet.