With the popularity of the 2003 R. Kelly hit song, “Steppin’ in the Name of Love” the Chicago-based dance – stepping – spread worldwide. But for Twin Cities stepper Kevin Johnson, stepping isn’t a dance – it’s a way of life. 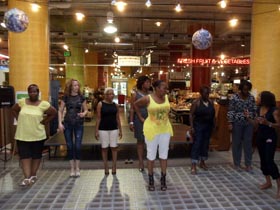 “Stepping is a lifestyle,” said Johnson. “It’s what you feel, it’s the way you dress, it’s the elegance of it. It’s the flair of it.”

Johnson, 56, a Chicago native who moved to the Twin Cities in the early 1980s, said he was a stepper well before Kelly came out with the song that is now considered the steppers anthem. The co-founder of the Twin Cities Steppers Association, Johnson said with the vast number of Minnesotans who have Chicago roots, stepping has become wildly popular in the region, and even steppers with no Chicago ties have become immersed in the culture – a culture that was born from another Chitown dance.

“Stepping started in the (19)’70s but it came out of the bop,” said Johnson. “The bop was fast. Stepping changed it a bit and slowed it down. Stepping is more smooth. Bopping is fast paced – see the era boppers were in, they were coming from the South and they were bopping at that fast pace because they were happy to be free (for the harsh racism in most southern states). Our generation (of original steppers) we’re more chill; more laid back.” 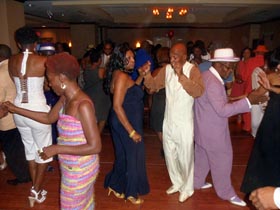 Johnson said stepping, which he calls a form of urban ballroom dance, differs from bopping because of pace and the dance is done on a different count.

“Stepping is done on the down beat, or the two,” said Johnson, who teaches the dance on Tuesdays at the Midtown Global Market, 920 E. Lake St., and on Wednesdays at Folwell in North Minneapolis. “Bopping, like salsa, is on the one. Stepping is an eight-count dance – actually it’s six counts, but we count the pauses and pivots.”

Started in 2004 by Johnson, Selena Taylor, Kim Taylor and Marvin White, the Twin Cities Steppers Association has grown to nearly 200 members, according to Johnson. The group hosts regular stepping events – including an upcoming Aug. 16 event at the Doubletree Hotel in St. Louis Park, 1500 Park Place Blvd. – as well as travels to various cities for what are called Steppers Sets. On Sept. 28 Johnson and the Twin Cities Steppers will present “Celebrate the Sistahs” stepping event, with a portion of the proceeds going to support the African-American Breast Cancer Alliance. The September event will also be held at the St. Louis Park Doubletree.

“We don’t just step as a dance, we’re in the community working with different causes and projects,” said Johnson. 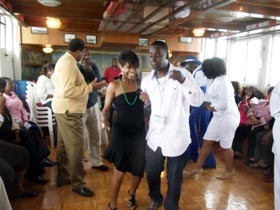 Johnson, who is an art dealer, said stepping attracts people of all ages.

A trendsetter, next for Johnson is a blending of stepping and salsa, which he calls The Soul of Salsa.

“There are other steppers groups here that have done just as much as us or even more, but we started the whole thing here,” said Johnson. “We’re trailblazers. We put this on the map in the Twin Cities.”