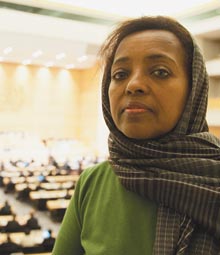 Timing-both good and bad-looms large in Fatuma Elmi’s life. She was born in an area of Somalia under Italian colonial trusteeship in 1953. This was good timing.

Her childhood and teen years were “the best time for Somalia,” Elmi said. The clan/tribe mentality did not yet prevail. Liberation was in the air, with young people eager to take responsibility for building a new nation. Independence came in 1960.

Elmi and her peers had the luxury of attending school-something their parents had not had. “We were better informed than anywhere in Africa,” Elmi recalled. “We knew about Angela Davis, Malcolm X, the Black Panthers.”

Following a 1969 coup, roads and hospitals were built, and literacy rates climbed. But when war erupted in late 1977, Elmi said, “everything started going downhill.”

By then, Elmi lived in Italy, and then in the United Arab Emirates, where she had a good job at an oil company. Many Somalis worked abroad, gaining experience and earning money before returning home to put their skills and experience to use.

Fatuma Elmi planned to do just that-but the timing could hardly have been worse. She quit her oil company job in 1991; later that year, Somalia’s government collapsed.

“The day I sent my belongings back to Somalia,” she said, “was the day civil war broke out.”

Elmi went instead to the United States, where her daughter attended school-first Boston, then Rochester, Minn., where other relatives had settled. Her husband followed in October 1991. Shocked by the harsh winter, they moved to California. Five months later, the 1992 Rodney King riots helped spur their return to more peaceful Minnesota.

“Here you only deal with one thing, which is the weather,” Elmi said.

She took a hotel housekeeping job (“Forget my resume,” she told the manager). Unused to physical labor, initially she came home so sore she needed nightly massages from her husband or daughter; after two or three months, “I was one of the best,” Elmi said. “It’s all about what you put in your mind.”

Elmi also began volunteering with refugees in Minneapolis, which led to a permanent job at Lutheran Social Service as an employment counselor, a role she’s held for 16 years.

“I believe if you help one woman, you help the whole family,” Elmi said.

While working locally with refugees-she found jobs for 79 percent of her clients last year, despite the difficult economy-Elmi also thinks globally, following developments in Somalia closely. She’s not optimistic.

“As long as you have life, you have hope for a miracle,” she said. “But it’s been 20 years, with the same people still running the show. As long as they’re around, out front or behind the scenes, things won’t change. For my generation, Somalia is gone.”

Addressing the assembled dignitaries, Secretary of State Hillary Rodham Clinton cited Elmi’s life during the past 20 years as “clear evidence of the wisdom of investing in women.”

Elmi went there not to receive laurels-indeed, she didn’t know Clinton would single her out-but to testify to the fact that refugees are not a burden. “They need only a helping hand in the beginning of their resettlement,” Elmi said.

Sixty-two nations presented written pledges before the ministerial meeting related to protection and assistance for refugees. At the event itself, another 20 nations pledged to accede to one or both of the two main international treaties on statelessness, while 25 more made various pledges-such as reforming laws to allow women to transmit their nationalities to children. Clinton announced a U.S. initiative to build global awareness and action on discriminatory nationality laws, which leave women and children especially vulnerable to exploitation and abuse.

Away from the world stage, Elmi draws strength and sustenance from her rewarding work in Minnesota-and from family and friends. “I have a grandchild now,” she said. “Spoiling him is taking much of my time.”

For many years, Elmi grieved the loss of friends she’d had in Somalia. Last summer, she attended a conference in Washington, D.C., for which she had to sign up on Facebook. “From time to time now, someone will find me-even someone I had totally forgotten about!” she exulted.

Beyond her work and family commitments, Elmi has volunteered as an election judge and worked on political campaigns. “Wherever I go,” she said, “I like to improve the life of human beings.”

For that, the timing is never bad.